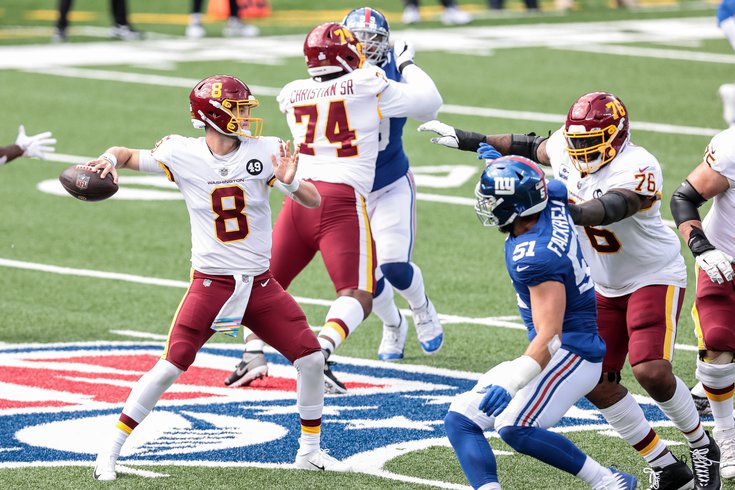 The Eagles' biggest threat in the NFC East is quarterbacked by Kyle Allen.

The Philadelphia Eagles are not a good football team. Fortunately for them, neither are any of the other teams in the NFC East, as the Birds are currently leading the division at 3-4-1 during their bye week.

And so, we'll continue on plotting the ideal outcomes for other games around the league as if the Eagles have a chance to contend this season, even though, again, they aren't good. Perhaps as the season goes along the lightbulb will go on and they'll look better? That's unlikely, but possible. Anyway, ideal winners for Sunday's slate of games are bolded below, and you can get the latest lines for all the Week 9 games over at TheLines.com.

• Giants at Football Team: First, the question that must be explored here is, who is the biggest threat to the Eagles' chances of winning the division? It feels pretty clear at this point that it is not the Cowboys, who are currently the worst team in the NFC.

It's also probably not the Giants, who are 2.5 games behind the Eagles in the standings. If you were to put an over-under on the number of games the Giants might win the rest of the season, what would it be? 2.5?

So that leaves the Football Team, who beat the Eagles Week 1, and who at least have a very good defensive line. The Giants have no such scary roster component, other than Saquon Barkley, who as you know, is done for the season.

• Seahawks at Bills: The Seahawks own the Eagles, and a matchup with them in the first round of the playoffs again could be ugly. It's probably best that they just get the 1 seed.

• Bears at Titans: The Bears are a team the Eagles could reasonably beat in the playoffs, so the more games they eke out, the better.

• Lions at Vikings: Again, the Eagles can beat the Lions. Better if they somehow get into the postseason.

• Broncos at Falcons: The Falcons are a good candidate to undergo a full-on rebuild this offseason, and as such, could be shopping for a new quarterback in the draft, should they be in position to nab one. The more games they lose, the more obstacles there will be for the Football Team (or even the Giants) to land one.

• Steelers at Cowboys: Yes, at some point it'll be better if the Cowboys win games so they mess up their draft position. We're not there yet. A win over the undefeated Steelers is the kind of thing that makes a team believers again. For now, it's better that they just continue to find whatever rock bottom is.

• Dolphins at Cardinals: While the Bears and Lions are teams I believe the Eagles can beat in the playoffs, the Cardinals would be a far more difficult opponent.

• Saints at Buccaneers (SNF): The belief here is that the Bucs are the better team here, so when you have two legitimate teams going head to head, it's probably best not to see a one pull away from the pack.