What they're saying: Eagles will be playoff underdogs, no matter who they play 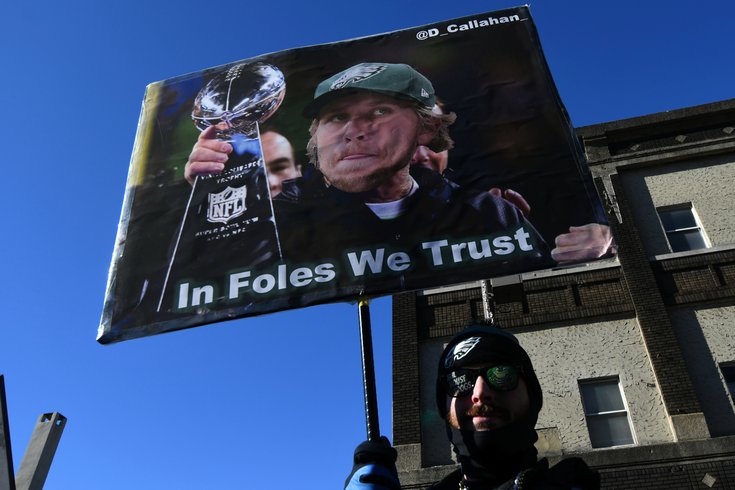 If you were told back in August that the Philadelphia Eagles would be playing in the second round of the NFL playoffs, you'd likely be thrilled that a team with a second-year coach and quarterback was able to make it that far.

Anything after that would just be icing on the cake.

However, a lot has happened in the four months since, and after going from playoff hopeful to class of the NFC in what seemed like the blink of an eye, the Birds' stock is rapidly falling in recent weeks, starting back when Carson Wentz tore his ACL against the Rams.

Because of what they had accomplished before his season-ending injury, the Eagles earned themselves a first-round bye. But because of what they've done in the three games since, Doug Pederson's team suddenly looks like one of the weakest of the six NFC playoff teams, despite having home field advantage throughout.

And Vegas seems to agree with that assessment. As Tim McManus of ESPN.com points out, the Eagles wouldn't be favored against any of the three teams they have a chance of playing in the divisional round of the playoffs:

Las Vegas isn't super high on the Eagles' odds at the moment. According to Westgate Las Vegas SuperBook, the Eagles would not be favored in any of their potential divisional matchups if it were to set the lines right now. They will face the sixth-seeded Atlanta Falcons if they upset the Los Angeles Rams, or the winner of the No. 4-5 matchup between the New Orleans Saints and Carolina Panthers.

Here are the rough line projections for those games:

This forecast is given with the caveat the lines will be shaped in part by what happens in the wild-card round, but it's telling nonetheless.  [espn.com]

So that begs the question of Eagles fans...

And now, a look at what they're saying about the NFC's No. 1-overall seed, which just so happens to be entering the postseason as an underdog...

From first to cursed?

Over at USA TODAY, NFL columnist Jarrett Bell took a look at the big question facing each of the 12 teams to make the playoffs. For the Eagles, that question was, "Are the Eagles cursed with Nick Foles?"

If anything, the curse was Carson Wentz going down.

“The clearest way to know the Eagles would have won the Super Bowl is that [Wentz’s injury] happened.” - @Noah_Becker

But that's in the past; it's all about Foles now.

The energy that fueled Philadelphia’s offense before Carson Wentz suffered a torn ACL has largely vanished, clearly a reflection of the challenge to maintain rhythm with Foles. During the final two games, the Eagles converted three of 25 third downs. Just as bad, Foles lacks the athleticism that allowed Wentz to extend plays, run for the sticks or so often create something out of nothing. The Eagles still have a shot at going all the way, given the supporting cast, but that’s assuming mistake-free quarterbacking from Foles.  [usatoday.com]

Enjoy it while it lasts

Sure, the opponent hasn't even been decided yet. But given that they'll likely be an underdog at home come January 13, saying that the Eagles will fail to get out of the first round is hardly a hot take. Still, here we are.

The Eagles will be one-and-done in the playoffs.

Nick Foles has struggled in two of his starts filling in for Carson Wentz and the offense has only scored 13 points in the last two games. Despite being the No. 1 seed, Philadelphia (13-3) might even be an underdog against the Saints, Panthers or Falcons in the divisional round.

Foles can’t possibly outplay Drew Brees, Cam Newton or Matt Ryan in a shootout. The Eagles would be better off with Nate Sudfeld.

That’s a double dose of overreactions to dissect.  [foxsports.com]

Then again, playing as an underdog can help rally a team and relieve some of the pressure that comes with being the top seed. Of course, this is only the consolation prize, as I'm sure fans would rather be a prohibitive favorite with Carson Wentz playing than an underdog without him.

The Eagles can make that work for them. It's not often that a team with a heavyweight's résumé, including a 7-1 record at home, gets dismissed as a lightweight. "Nobody believes in us" is a tired, lazy-minded battle cry. But let's face it: Nobody believes in the Eagles anymore. People stopped believing the moment No. 11 exited (with a hobble) stage left...

America loves few things more than an underdog, so it should go ahead and embrace the Eagles now. They didn't just lose a franchise quarterback a few weeks ago, they lost their left tackle (Jason Peters), middle linebacker (Jordan Hicks), all-purpose back (Darren Sproles) and special-teams ace (Chris Maragos) in the fall. How many teams win a Super Bowl after losing a potential league-MVP quarterback and a nine-time Pro Bowler at left tackle?

None. The Eagles are extremely vulnerable now, which makes them more likable. So does their postseason history, or lack thereof.  [espn.com]

The right way to go

That rallying cry won't be the only thing the Eagles have going for them in the playoffs. And, if they really want a chance at winning, they'd be wise to rely as little on Nick Foles as possible. Martin Frank offered up a blueprint for the Eagles to advance to the NFC title game, and you might suspect, it starts with running the ball on offense. And then running it some more.

The running game has to come up big, too. The Eagles are certainly capable of that. Jay Ajayi will clearly be the featured back. The Eagles were building towards that since they traded for him on Oct. 31. Now it's time for him to prove it. He needs to carry the ball at least 20 times, with some carries sprinkled in to LeGarrette Blount.

If the Eagles don't have a run-pass ratio close to or above 50-50 in the playoffs, they're not going to win. Simple as that.  [delawareonline.com]

Sizing up the competition

And when it comes to each potential opponent, Aaron Kasinitz of PennLive.com took a look at each team with a chance of traveling to the Linc for their second playoff game – and how they match up against a Wentz-less Eagles team.

Matchup to watch when the Eagles have the ball: Eagles QB Nick Foles vs. Saints DBs

A ballhawking secondary stands as one reason the Saints returned to the postseason this year. New Orleans ranked third in the NFL in the regular season with 20 interceptions, including a team-high five from rookie cornerback Marshon Lattimore, who would be eager to face Foles and an Eagles offense still aiming to find its footing without Wentz.  [pennlive.com]