What they're saying: How Phillies landed Arrieta – and what his arrival means for their playoff chances 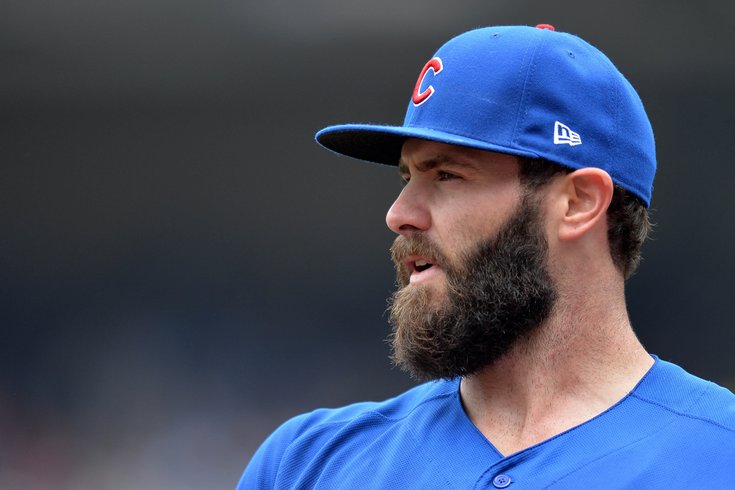 New Phillies starting pitcher Jake Arrieta looks on during a 2017 game between the Cubs and Padres.

The Phillies used some creativity (and some helpful recruiting tools) to lure former Cy Young winner Jake Arrieta to Philadelphia.

The team may be done making moves for now, but the Arrieta signing capped off a wild couple of months for the Phils, a stretch that saw them vault from a free agency afterthought to one of the most active teams in baseball.

Here's a look at what they're saying about their latest addition, and what these signings mean for the Phillies' ongoing rebuild...

How did Arrieta come to be a member of the Phillies? Matt Breen over at philly.com has a nice breakdown of the courting process:

Arrieta was forced to lower his contract demands as each day of camp ended without him wearing a uniform. Boras called the Phillies two weeks ago, knowing they still had that binder and were still in desperate need of a starting pitcher. The two parties talked sporadically. A short-team deal, one that the Phillies would’ve pounced on three months earlier, seemed to be in reach.

“The question was, simply, would it make sense economically in terms of years and dollars?” Klentak said. “That’s the part it took a few months to sort through.”

The negotiations peaked Thursday night when Klentak said the two parties “laid their cards on the table.” They finalized an agreement just after midnight Saturday night and Arrieta flew Sunday to Philadelphia. The deal became official Monday when he passed his physical. The pitcher boarded John Middleton’s private jet — a white Bombardier Challenger with a Phillies “P” on the tail — and flew to Florida. Klentak waited on the tarmac in St. Petersburg with other members of the front office to greet Arrieta. The plane touched down late Monday. The Phillies had landed one of the offseason’s premier free agents. And it all seemed so unlikely.  [philly.com]

As it turns out, the Phillies had to get creative in order to make this deal work out. And it could wind up costing them quite a bit more than the $75 million guaranteed.

Like the contracts of Boras clients Eric Hosmer and J.D. Martinez, it appears as if Arrieta’s contract is front loaded and includes an opt out clause. According to Jon Heyman and Bob Nightengale, Arrieta’s 2018 salary is $30 million, but drops to $25 million in 2019. Arrieta’s opt out clause apparently is an option at the end of the 2019 season with a 2020 salary set at $20 million. Heyman has also reported the Phillies have the option to void the opt out and establish a two-year contract extension that begins at $20 million per year. It also appears there are various performance incentives as well. In total, the contract has the potential of reaching $135 million.

The Phillies were only one of two ball clubs that truly expressed a sincere interest in Arrieta’s services over the past two weeks. Originally, it was believed the Phillies were deeply committed to the arduous task of rebuilding their roster and subscribing to a payroll containment strategy. However, the December free agent acquisition of Carlos Santana for three years and $60 million opened a few eyes. Rookie manager Gabe Kapler now has the luxury of handing the ball every fifth day to a legitimate ace in his rotation as well as someone with an exceptional work ethic who can impart wisdom on a young and impressionable ball club.  [forbes.com]

On the fast track?

The Phillies are spending unlike any other team this offseason. But will that translate into instant improvement? And if so, how much?

While the rest of the industry has largely turned away from free agency as the preferred method of acquiring players — a trend that has inflamed labor relations and left many players still scrambling for jobs — the Phillies have treated these past 4½ months as some sort of game-show shopping spree, where they have to fill up their cart with as many shiny products as possible and get to the checkout counter before the clock runs out...

In spending a total of $169.2 million in guaranteed contracts this offseason, the Phillies have outspent the rest of the NL East ($116.245 million) by roughly 46 percent. (The first-place Washington Nationals, by comparison, have spent just $23.3 million.)

The question on many industry insiders’ minds is: why? And the answer appears to be some mixture of opportunity and opportunism...

The Phillies could have given their rebuild another year, waited until next winter and — with their strong revenue and paltry salary commitments — gone nuts in a historic free agent market that will include Bryce Harper, Manny Machado and possibly Clayton Kershaw. (And they still might, it’s worth pointing out.) But in the strange, depressed free agent market of the winter of 2017-18, the Phillies also saw the chance to find bargains — and perhaps put themselves in position to contend for a playoff spot a year early.  [washingtonpost.com]

Obviously, the addition of a former Cy Young winner in Arrieta has his new Phillies teammates excited. So excited, in fact, that several packed into the back of Tuesday's press conference to get a first look at their new starter before the team's morning workout.

“I don’t know what other thought there would be other than it’s a great move for us,” catcher Cameron Rupp said. “How can you think otherwise? It’s exciting. It’s a guy who has established himself in the big leagues, been to a World Series. There’s a lot of good things that can come from not only having him on our pitching staff, but in our clubhouse as well..."

“It shows that the turning of the tide is a lot sooner than I think we all thought,” pitcher Jerad Eickhoff said. “This whole camp has been real positive and there was this sense that it could happen sooner than later, but this is just another piece. It's a pretty exciting time.” [nbcsports.com]

Lured by the Hunter

You might want to thank Tommy Hunter for putting in a good word with the Phillies' new ace.

Tommy Hunter's biggest pitch for the Philadelphia Phillies came before he even took the mound for his new team.

Since he signed a two-year deal in December, the reliever has been pushing Jake Arrieta to follow him to Philadelphia. Mission accomplished.

"I've been on the phone with him this whole entire offseason to see if it can work out," Hunter said Monday. "I was coming hard. It's not up to you as a player or a friend. Ultimately it's up to the people in charge to get this done, and they did it."

Hunter and Arrieta have been friends since their college days. They spent four years together in Baltimore and have remained close. Hunter said their wives have been texting each other regularly about places to live.  [espn.com]

I get it, David. Why would anyone ever want to play anywhere other than Chicago unless they were manipulated into doing so? [/end sarcasm]

Arrieta's a big boy and any deal can't get done without him signing off on it, no matter how hard Boras tries. He just became the highest-paid (on average) player in the history of Philly sports – that's all of the teams, not just the Phillies – so it's hard to see how this "broken system" let him down.

Oh, and he can opt out after two years.

Nobody will feel too sorry for the professional athlete who just signed a contract with the Phillies guaranteeing $75 million over three seasons. But even if Arrieta never would admit it, you wonder if a small part of him regrets listening so obediently to so-called superagent Scott Boras, whose unrealistic demands always made it difficult to envision the right-hander remaining a Cub. Arrieta might have been the one standing outside the Phillies team plane in a tweet Monday night, but behind the scenes it was Boras who gassed up the jet and devised the flight plan.

Did Arrieta’s smile look a little forced? No matter how excited Arrieta sounds when the Phillies introduce him Tuesday in Florida, how happy can one of baseball’s most competitive pitchers really be after leaving a perennial World Series contender for a team that will consider a .500 season successful?

Arrieta followed Boras’ advice all the way out of town, from Wrigley Field to Citizens Bank Park, which Philly.com on Monday called “a home-run factory.’’ He trusted baseball’s system, and the broken system let him down as much as his agent.  [chicagotribune.com]

Pick up the pace

In his 2015 Cy Young season, Arrieta's fastball was clocked at an average speed of 94.9 mph, according to PITCHf/x. Last season, however, his fastball velocity was down considerably, falling to 92.6 mph on average. Is that a cause for concern?

Arrieta, 32, did not deny the velocity drop. But he made it clear that there's more to pitching than a big fastball.

"You get to a point in your career where you understand that pitching isn't necessarily all about velocity," he said. "I can't tell you how many times you'll see guys who have high velocity that can't have success at this level. There is a tremendous amount of learning that has to be incorporated into a starting pitcher's repertoire rather than just going out there and trying to blow guys away with just sheer stuff and velocity...

"That's not necessarily a tremendous concern for me. It's an opportunity to learn more about yourself and to maybe utilize another variable in your game. If that velocity does go back to 95-96 then the league is in a lot of trouble. But I don't think that tells the entire story. Velocity is sexy in this game, but there are a lot of great pitchers that can pitch without it."  [nbcsports.com]