What they're saying (in Minnesota): How confident are Vikings fans about facing Eagles?

In a previous edition of "What They're Saying," back before the wild-card round of the playoffs, we pointed out the fact that Minneapolis Star Tribune columnist Jim Souhan believed the Eagles were the weakest team in the NFC playoffs, comparing a Carson Wentz-less Birds "a relay team without a baton."

Here's a look at what he wrote back on January 5th:

Philadelphia earned the NFC’s No. 1 seed but without quarterback Carson Wentz, the Eagles are a relay team without a baton. Here are the true, current power rankings for the six teams in the NFC bracket:

This isn’t fair, but then football is not about fairness. Before Wentz’s season-ending knee injury, the Eagles looked like the NFC favorite because of their balance and Wentz’s ability to make big plays. He might have won the MVP award.

Without him, the Eagles have tried Nick Foles, one of those players who piques your interest until you see him in person... The drop-off from Wentz to Foles makes the Eagles the weakest playoff team in the NFC playoffs.  [startribune.com]

Of course, that was immediately following the Eagles' 6-0 loss to the Cowboys in the season finale when every was way down on the Birds. But now that here are only two teams left standing in the NFC, those words could come back to haunt Souhan on Sunday night, when the Eagles host the Vikings – conveniently enough, he had the Vikings ranked first – in the NFC Championship.

The Star Tribune currently has a poll asking readers how confident they are in facing the Eagles. And while some agree with Souhan's appraisal of the Birds, not everyone in Viking Country is confident in their team's chances of advancing to the Super Bowl.

While Souhan's power rankings would indicate that a trip to Philly is the ideal scenario for Vikings, the Eagles seemed to relish the home underdog role against the Falcons in the divisional round. Another upset, and it'll be on to the Super Bowl.

Here's a look at some more of what the Minnesota media has to say about Eagles-Vikings:

Third is the word

The Vikings, it seems, have plenty of respect for the Eagles' defense. And, as we wrote earlier, success on third down is going to be crucial on Sunday night.

Perhaps a trip to the Super Bowl will also be decided by third downs. Minnesota’s offense is preparing this week for the Eagles’ No. 2 third-down defense, bested only by the group quarterback Case Keenum practices against every week.

“It’s going to be a tough one, I can tell you that,” cornerback Xavier Rhodes said, adding as a connoisseur of defensive football: The Eagles “defense is good.”

Four of the NFL’s top five scoring defenses remain in conference championship weekend and it’s no coincidence. The Eagles have the freshest defense by way of third- and fourth-down success, averaging an NFL-low 27 minutes and 19 seconds on the field. [startribune.com]

Full disclosure: This is from a NSFW recap of head coach Mike Zimmer's press conference. I included it for two reasons. First, it has the full answer from Zimmer on what he thinks of the Eagles. Second, the interpretation of what he meant made me laugh out loud. And it wasn't just this answer.

[Note: The NSFW language has been edited.]

Q: What is your impression of the Eagles? How much will you look at last year’s film?

What Zim Tzu said: It’s very, very early on Philadelphia. I’ve watched a couple of their games offensively now. We’ve still got a lot of work to do. We will watch the game from last year, obviously. At the time when we played him last year, he was a pretty young quarterback. We’ll just try to figure it out. They’ve got some great schemes. Some of the things they do are very tough to defend. So, we’ll have to work on that. I know they’ve got a great defense. I haven’t started watching their defense yet but their front guys are really good. #27 [Malcolm Jenkins], the safety, he’s a very good player. We’ll just have to start studying them up.

What Zim Tzu meant: I laughed watching Nick Foles and how we’re gonna f**k him up. Their defense is legit. Malcom Jenkins went to Ohio State and is not dead to me, but get back to me Sunday night for an update on that.  [dailynorseman.com]

The Vikings had to get over their miraculous win on Sunday before turning their attention to the Eagles. That seems like it could be difficult, but according to wideout Adam Thielen, it actually makes it easier.

Spending more time reflecting on Sunday’s win, no matter how dramatic it might have been, ultimately won’t help the Vikings get back to U.S. Bank Stadium for Super Bowl LII. And so, after a moment that triggered jubilation across the state, a team that seems to relish the grind of an NFL season moves on.

“I think it’s easier [to prepare for the next game after a win like Sunday],” wide receiver Adam Thielen said. “It’s easy to forget about the game and say, ‘Hey, we’ve got to go prepare and put our best foot forward for the Eagles.’ You don’t get that opportunity every year. We know how hard it is to get to the playoffs in general, and then to get to the NFC Championship Game. You just never know if you’ll have the opportunity again, so you really want to make the most of it.”  [startribune.com]

The Vikings would also be wise not to forget the fact that they nearly lost that game on Sunday night after taking a 17-0 lead into halftime. It was also the worst second-half performance from their defense all season. But they don't seem to be worried about a repeat performance, mainly because Nick Foles is not Drew Brees.

Quarterback Drew Brees and the Saints scored 24 second-half points to take a 24-23 lead with 25 seconds left. It was the most points the Vikings have allowed in a second half since Zimmer’s first season in Minnesota in 2014...

The Vikings won’t face a quarterback of Brees’ caliber on Sunday; Eagles backup Nick Foles has stepped in for injured MVP candidate Carson Wentz. In four games with Foles running the show, the Eagles are averaging 277 yards a game. If applied to a full season, it would be the NFL’s worst offense this season.

On the other hand, the Eagles are 3-1 in those games and beat Atlanta, 15-10, in last weekend’s playoff meeting.  [twincities.com]

On Sunday, the Vikings could be without safety Andrew Sendejo, who had an interception in Minnesota's win over the Saints. He's in the concussion protocol after this hit from New Orleans wideout Michael Thomas.

Sendejo will be in the NFL’s concussion protocol this week and will need to pass the tests before being cleared to play on Sunday against the Eagles in the NFC Championship Game.

If Sendejo can’t go, Anthony Harris will likely start in his place.

Sendejo was one of the better safeties in the NFL this season, despite what people may think. He had a Pro Football Focus grade of 87.3, making him the 11th-ranked safety in the NFL.  [vikingswire.usatoday.com]

The weather is expected to be just fine for Sunday's NFC Championship, but that doesn't mean that the Vikings will be. Historically, they've been subpar playing in outdoor stadiums, but here's why that might not matter in this one.

So here's the thing: The Vikings used to struggle when they had to play outside. Spending 32 seasons in the Metrodome will do that to a team. Based on numbers gathered by Star Tribune data editor Mary Jo Webster, from 1982-present, the Vikings have won just 39 percent of their games played outside -- one of the worst percentages in the NFL. Now, that number is skewed somewhat because teams with outdoor stadiums get to include home games in that figure, but it does illustrate the general struggle for the Vikings outside... 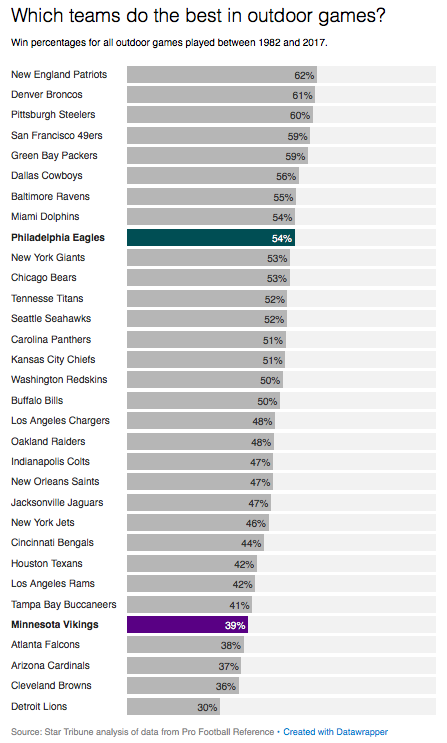 Since [hiring Mike Zimmer in 2014], the Vikings have still been a better indoor team than outdoor team, going 18-7 inside over the last four seasons -- including 8-1 this season at U.S. Bank Stadium, counting Sunday's playoff win. But their outdoor record, counting both home games and road games, is 22-18 (winning 55 percent of the time). One of those losses was the 10-9 playoff defeat to Seattle in 2015, a game the Vikings would have won if Blair Walsh had made a 27-yard field goal.[startribune.com]