What they're saying: The Mount Rushmore of terrible NFL analysis 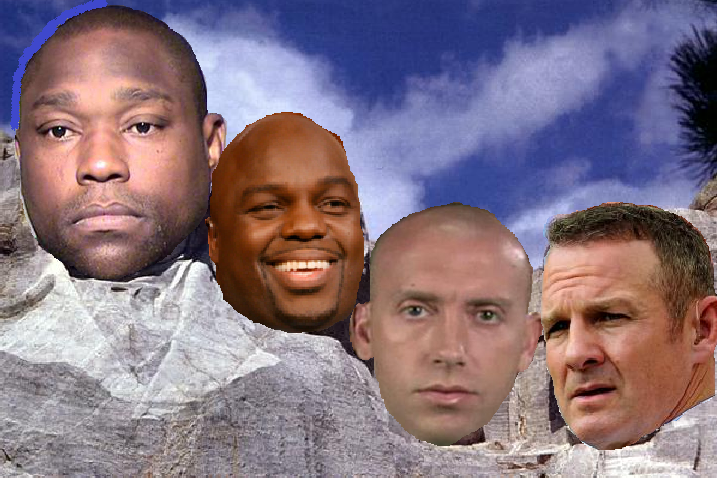 The Seahawks secondary is banged up, Johnny Manziel is trying to recover from too many Harvey Wallbangers, and Warren Sapp was arrested for allegedly soliciting a prostitute to, well, pretend to enjoy his company. Here's what they're saying around the league:

Tommy talks about the cocky Seahawks (who lost in gut-punch fashion at the Super Bowl), the cocky Johnny Football (who is entering rehab), and the arrogant Warren Sapp (who was allegedly trolling for hookers). His thoughts on Sapp:

Warren Sapp is the worst NFL analyst on TV. Or “was”, I should say. The NFL Network has fired him after an incident in which Sapp was soliciting a prostitute and also accused of assault.

Sapp was a complete jackass and a constant embarrassment to the NFL Network. I have no idea how that network felt he was worth keeping around this long. We can all disagree with a player or analyst. They often drive me crazy with lazy thinking and opinions that seem to be uttered simply to draw a reaction. But some of that is the fault of the networks and the producers.

Take Michael Irvin for instance. Watch the “U Know It” segment with he and Sapp and you’ll want a nuclear missile to be fired directly into your cerebral cortex. But listen to Irvin when he’s a guest on the radio with Jim Rome or Dan Patrick. Irvin tells good stories. He offers real insight. He loses the histrionics that make him so awful on TV.

Sapp was awful no matter where, no matter when. He offered dumb opinions that were far more catchphrases than actual thoughts. He never wanted to have an intelligent discussion on football. He wanted to shout until you acknowledged his opinion.

#JimmyNote: I'll reluctantly agree that Sapp is (was) the worst NFL analyst on TV. Heath Evans, also of NFL Network, is also incredibly awful. As long as we're kicking Sapp while he's down, here's what I said about Sapp back in the days of my old NFC East blog:

After watching four straight days of the Combine on NFL Network, I don’t want to see Warren Sapp’s face on TV ever again. And it’s not even as if he got a ton of airtime. He brought literally nothing to the table. Nothing. When NFLN went to Willie McGinest to talk about DEs and OLBs, he was informative. When they could set aside the annoying Leon Sandcastle stuff for two seconds and Deion Sanders actually evaluated which DBs looked good in the drills, he was able to talk about players intelligently. When they asked Marshall Faulk about traits he liked in various running backs, it was clear Marshall had at least done some homework. When they went to Sapp, he would say stuff like, “When I watched that guy play, he didn’t stand out like a turd in the punch bowl.” Bull(poopy). Sapp didn’t watch film. He evaded questions with what he thought was comedy to deflect his lack of film study. If Sapp is going to play the “clown role” like Frank Caliendo, then let him be the clown that he is. Otherwise, get him the hell off my TV.

#JimmyNote2: Oh wait! I forgot Jamie Dukes! He's awful too. And Merril Hoge. You know what? Just see the Mount Rushmore of terrible NFL analysis above.

"He's going to have surgery," Carroll said of Lane. "He had a real difficult break. They have to wait a couple of days to make sure it's all prepared properly and all of that. He'll be OK, but it's going to be a significant surgery."

#JimmyNote: So... How does this affect the Eagles? By my count, four of the Seahawks' top five players in their secondary head into the offseason injured, some more seriously than others. The only healthy starter in the Seahawks secondary is free agent-to-be Byron Maxwell, who is widely thought to be a perfect fit at corner for the Eagles, should they opt to pursue him in free agency.

The Seahawks have a lot of work to do this offseason with player contracts. Russell Wilson may become the highest paid player in the NFL, and Seattle is going to have to figure out what to do with Marshawn Lynch. Still, with so many defensive backs in the M*A*S*H unit, the Seahawks may need to put a high priority on retaining Maxwell.

Manziel, who won the Heisman as a freshman at Texas A&M where his playmaking skills earned him his "Johnny Football" nickname, has faced questions for several years about his active nightlife. After he was drafted in May by the Browns in the first round, Manziel was repeatedly photographed drinking alcohol during weekend trips to Las Vegas. A photograph of Manziel floating on an inflatable swan raft swigging a bottle of champagne went viral.

The Browns became increasingly concerned about Manziel when a photo surfaced of Manziel holding a rolled bill in a bathroom.

Manziel often dismissed criticism about his behavior, insisting he wasn't going to let others dictate to him how to live his life. However, following the season, Manziel seemed embarrassed by some of his choices and vowed to change his ways.

#JimmySilverLining: A lot of Eagles fans are upset with first round pick Marcus Smith's production in his rookie season, and rightfully so. But it could be worse.

#JimmyBlackCloud: One year after drafting Manziel, the Browns could be in the hunt once again to draft a QB in 2015, and they have better ammo (the 12th and 19th overall picks) than the Eagles if they want to try to move up to go get one.

My daughter will make picks for you for money:

My 3-year old daughter is three for three on her NFL picks. In June of 2013, she correctly picked the Eagles to win the NFC East. But more importantly, it's her unspoken analysis that was so dead on. Recognizing how bad the NFC East was going to be, she immediately wasn't buying the Redskins hype, then she just dismissed the Cowboys and Giants simultaneously, followed by the Eagles. When she was pressed into picking a team, she settled on the Eagles:

In January of 2014, she correctly picked the Seahawks (Seagles) to win the Super Bowl:

And then finally, in this Super Bowl, you can see her unspoken analysis at work once again. Knowing that there would be a crazy ending to the Super Bowl, she held up the Seahawks helmet while saying "Patriots," before definitively choosing the Pats. "Va va va va va va vaaaa!" was undoubtedly her way of saying an undrafted rookie free agent would win the game with an interception.