Which industries invest the most in Super Bowl commercials?

After 45 companies spent a record $357.8 million on commercials last year, the automotive sector is poised to take the lead in 2016 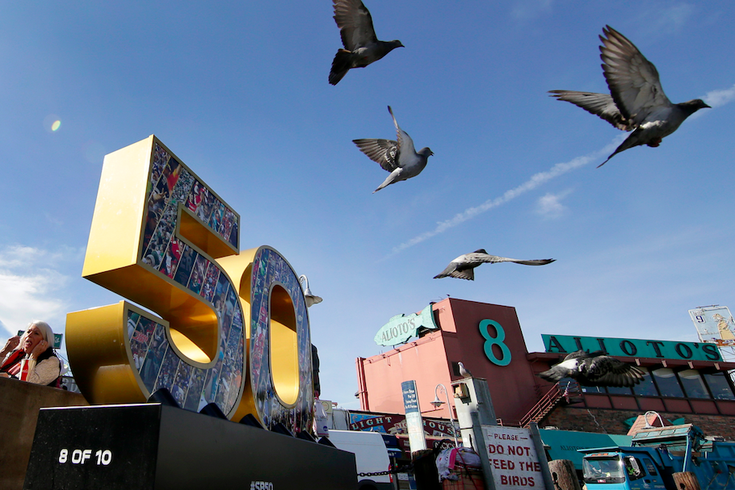 With Super Bowl 50 right around the corner, football fans and casual observers of the annual spectacle can expect to see the best the advertising industry has to offer Sunday night. Many of the most iconic global brands have paid television's steepest price to define themselves through commercials that leave lasting, sometimes generational impressions: Coca Cola's polar bears, Apple's "Think Different" campaign and the Aflac duck all come to mind.

In 2015, a U.S. record 144.4 million people watched the Patriots dramatically unseat the Seahawks for the Lombardi Trophy. A total of 45 companies spent $357.8 million on commercials that aired during approximately 48 minutes of the broadcast. Each 30-second spot cost a whopping $4.5 million, according to IBIS World, in a trend that has seen the average rate for those slots climb 76 percent over the past decade.

So who's shelling out the most for America's precious eyeballs? Here's a quick breakdown of the top five industries that invest in Super Bowl commercials.

• Companies in the automotive sector spent $99 million on advertisements in 2015, compared to $39.9 million in 2010. Six manufacturers led the pack: Toyota, BMW, Daimler AG, Hyundai, Nissan and FCA. With auto market imports accounting for 58 percent of U.S. domestic demand, it's no surprise that foreign manufacturers accounted for 77.3 percent of Super Bowl advertising in 2015.

• The technology sector has increased its Super Bowl spending significantly since 2011 to promote mobile devices, website creation software, tax software, online games and accessories. The industry as a whole spent $74.3 million in 2015.

• At $63 million, the food and beverage industry (including beer, of course) accounted for 17.6 percent of total money spent on Super Bowl ads last year. Since 2010, however, advertising from this sector has declined as demand for soda and snacks shifts toward healthier options. Except beer: Anheuser-Busch has spent the most over the past five years, including $31.5 million in 2015 for three Budweiser and Bud Light commercials.

• The media sector spent $36 million on four minutes of ad time in 2015, led by the movie and video production industry. As box-office sales dipped in recent years, companies like Walt Disney Pictures, Universal Pictures and Paramount Pictures have contributed to an annual increase of 17 percent in media sector Super Bowl spending over the last five years.

• The financial sector increased its Super Bowl ad spending from $6.6 million in 2010 to $24.8 million in 2015, the fastest rate of increase during that period. Its expenditure tracks an increase in consumer purchases of big-ticket items that require insurance and financing, which is in part, why the Geico gecko became such a celebrity in recent years.

The chart below displays Super Bowl ad spending by industry over the last five years. 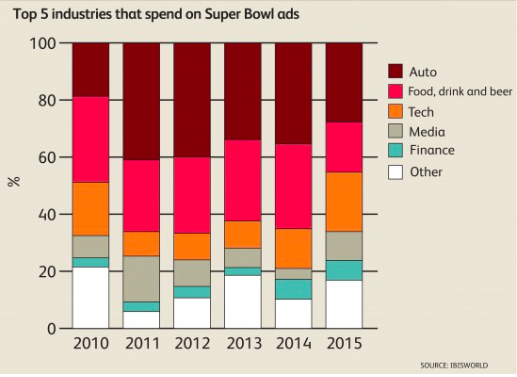 We're not about to spoil the fun for this year's crop of commercials, but if you're interested in a sneak peek, People compiled several ads that will air during the big game. The only hint we'll offer is that the trend of celebrity endorsements is on track to continue this year, and Eagles fans will either be delighted (or disgusted) to see dear friend Terrell Owens back in action on behalf of Butterfingers.