The three-year-old girl was swept over the edge of Whitewater Falls, authorities said 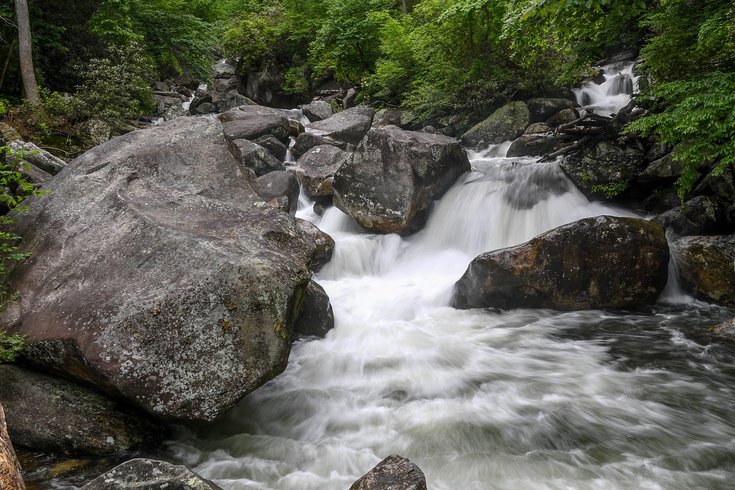 Water flows along Whitewater Falls, a series of waterfalls and cascades along the Whitewater River in North Carolina and South Carolina. A three-year-old girl from Pennsylvania died in an accident at the waterfall on April 10.

A three-year-old Lancaster County girl died on Sunday evening when she was swept up in a waterfall she had been visiting with her family in North Carolina, authorities said.

The Jackson County Sheriff's Office in North Carolina identified the girl on Monday as Nevaeh Jade Newswanger. She was in the area with her family from Denver, a small community about 63 miles northwest of Philadelphia.

Emergency crews from multiple counties were called to the area of Whitewater Falls shortly before 6:00 on Sunday for a report that the girl had been "swept away from the top of the falls" and carried away by a current, according to the Associated Press.

Whitewater Falls is a series of waterfalls and cascades on the Whitewater River that cross the border from North Carolina into South Carolina. The U.S. Forest Services calls Whitewater Falls the highest waterfall east of the Rocky Mountains, with a drop of more than 400 feet.

Recovery operations lasted several hours before the toddler was found in an area of the waterfall around 1 a.m. on Monday.

Newswanger and her family had been staying with family in Oconee County, South Carolina.

"First and foremost our prayers are with the Newswanger family as they grieve the loss of this precious young child," Jackson County Sheriff Chip Hall said Monday. "With the onset of spring weather, we need to be reminded of the dangers associated with many scenic areas of the region such as waterfalls."

The Citizen-Times in Ashville reported Monday that at least 15 people have died at Whitewater Falls since 1995.

"While beautiful to view from a safe distance, venturing out closer to the falls for any reason brings tremendous danger," Hall continued. "Always remain at a safe distance, follow safety precautions and warnings which are in place, and view waterfalls from designated viewing areas."