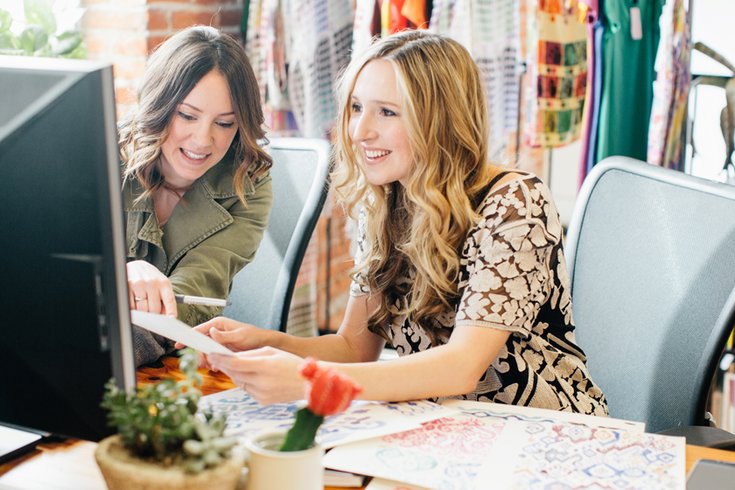 Amy Voloshin, center, is the founder of Printfresh Studio and winner of the Young Entrepreneur of the Year award from the Greater Philadelphia Chamber of Commerce.

Small businesses make up the lifeblood of the economy – according to the Small Business Administration, they create around 60 percent of all new jobs in the private sector. That’s why the Greater Philadelphia Chamber of Commerce honors the best of these companies each year with its Small Business Excellence Awards.

To qualify for a nomination, a company must have 100 employees or fewer (except for the Manufacturing and Sustainable Service categories, where companies can have up to 500 employees) and exemplify the ideals of community involvement and social responsibility.

The 33rd annual awards ceremony will be Nov. 5, but winners have been announced already. Below, learn more about 11 companies, from startups to family businesses that have been here for generations, that have made a difference to the business community.

This prize is given to a small company that grows into a large one or a large business that contributes to the small business community. The University City Science Center, the oldest and largest urban research center in the country, provides lab and office space and business incubation for technology companies and research institutions. As a result, it has helped companies that now generate more than $9 billion in regional economic output annually.

The tailors working with Davidsen in his Rittenhouse Square business not only offer impeccable style and custom clothing but also coach clients on behavior and communication style in order to craft a perfect personal image.

This Philadelphia ad agency turned 50 in 2014. CEO Marc Brownstein is the son of founder Berny Brownstein and says he keeps his father’s values. As he told Ad Age last year: “I am a second-generation Brownstein, but we treat everyone like family, regardless of their last name. If you truly care about the people you hire, it will show in the work they do.”

Manufacturer of the Year: Acme Corrugated

This Hatboro, Montgomery County, company makes corrugated cardboard boxes. OK, it’s not the sexiest business, but the company stands out by focusing on the environment – for example, by forming a fiber reduction team devoted to finding ways to use less material in paper.

Hopeworks trains Camden youth to help them get their GEDs, go to college or get a job. It offers training courses in information technology and Web design so that inner-city youth can break into the technology sector.

This Philadelphia architecture firm, established in 1984, says that its design philosophy is based on the principles of “provocation,” “research” and “environmental sustainability.” One of its notable projects was the transformation of Dilworth Park next to City Hall.

Retailer of the Year: HubBub Coffee

HubBub raised some noise when it opened as a food truck in West Philadelphia in 2009. It now offers hot brews and Wi-Fi at three locations in University City, Center City and Radnor.

Cera is the CEO of Arcweb Technologies, a company that builds digital products. It creates smart software to help small and large businesses succeed on both mobile and desktop platforms.

A Temple University graduate started this company after he wanted to find a way to easily compost in the city. Simply put your food scraps into a bin and the company will pick up what would be waste and turn it into useful soil instead.

This East Falls wireless technology firm, founded in 2003, crafts code that is used by Fortune 500 companies. It is also notable for being a woman-run tech business: CEO Felicite Moorman joined the company in 2012.

Voloshin founded her textile design center Printfresh Studio in Kensington in 2006 with her husband Leo Voloshin. A graduate of the Rhode Island School of Design, Amy Voloshin creates prints, graphics and embroideries for companies like Zara, Urban Outfitters and Forever 21.