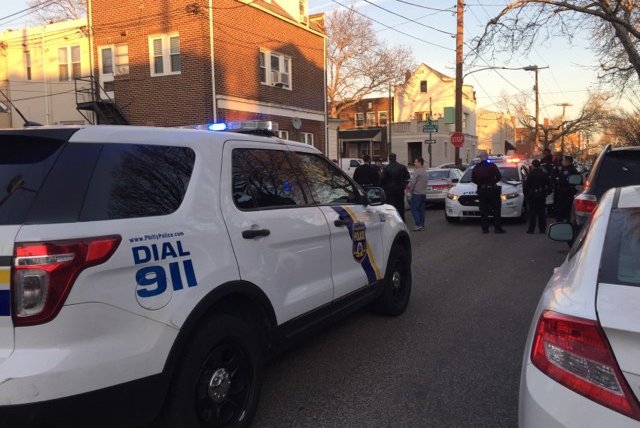 Police officers gather at the scene where a police-involved car chase ended in South Philadelphia on Friday afternoon.

A car chase involving Camden County sheriff's officers ended in an arrest in South Philadelphia on Friday afternoon, according to police and witness reports.

Joseph Bush, 38, led police on a chase from an undisclosed BB&T Bank branch after allegedly robbing the bank, a Camden County spokesman said.

Philadelphia attorney Billy Ciancaglini told PhillyVoice that he had just parked his car in the area of 12th and Johnston streets when the suspect, who had sped the wrong way down 12th Street, almost hit him.

"(The vehicle) was coming right at me," Ciancaglini said.

Ciancaglini said the suspect crashed at the intersection and fled toward Oregon Avenue in an alley between 12th and Marvine streets as police cars trailed close behind. He was then chased on foot by police and captured, Ciancaglini said.

"Police sirens were about five seconds behind him when he started running up the alley, and I actually pointed up the alley," Ciancaglini said, adding that this sort of thing typically doesn't happen in the neighborhood, which he described as "very quiet."

Philadelphia police officers helped pursue and apprehend Bush, who will be charged with eluding, resisting arrest, aggravated assault on a police officer and robbery, the spokesman said.