Would that controversial billboard even be visible from Fairmount Park?

As a councilman pushes a bill that would amend the zoning code, people worry about damaging the beauty of green spaces 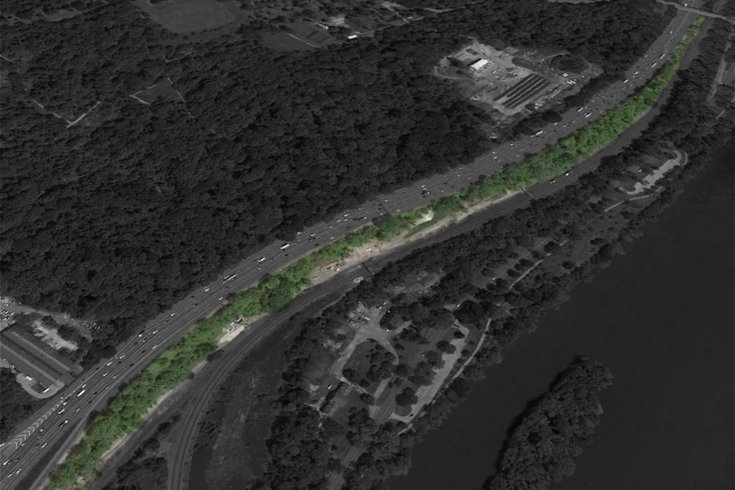 The proposed location for the billboard is a narrow strip of land (area in color) between the Schuylkill Expressway, at top, and CSX railyard, at bottom. It is currently zoned “Parks and Open Space.”

When I heard that my former Philadelphia city councilman wanted to amend the city’s zoning code so a billboard could pop up in Fairmount Park, the worst-case scenarios instantly came to mind.

They’re so blinded by a need for money that they’ll visually adulterate a green space in the name of revenues.

They say it’s only one billboard, but soon, you won’t be able to see a single tree near the Belmont Plateau; it’ll be a NASCAR driver’s uniform in the form of a park.

Those were the initial thoughts. Well, overreactions would technically be a better description.

“Sign our petition to voice your opposition to this proposal to unlawfully change the rules to allow for a double-sided digital billboard on open space in Fairmount Park!” read a Scenic Philadelphia petition that had 1,033 signatures as of Wednesday afternoon.

It would do so by rezoning the area from “Parks and Open Space” to “Medium Industrial.”

“It obstructed the view from the cafeteria of the new CHOP facility." – Josh Cohen, chief of staff for City Councilman Curtis Jones

Opponents say such a move would violate the Highway Beautification Act, introduced by President Lyndon Johnson in 1965 “to promote the safety and recreational value of public travel, and to preserve natural beauty” of highways.

Setting aside that the Schuylkill Expressway is anything but naturally beautiful, legislation that commodifies green space takes away from its inherent vibe of relaxation and peacefulness.

So, yes, putting digital billboards smack dab in the middle of Fairmount (and any other) Park should be a non-starter.

Paul Chrystie, director of communications for the city's Department of Planning and Development, said the matter came up before the Planning Commission this week. The commission "does not recommend approval."

Council’s Rules Committee scheduled to hear it next Wednesday (May 23) – the path that led to this, and the location itself, warrants a closer look.

'A LOT OF MISINFORMATION'

While the instantaneous reaction framed it as a travesty, the bill seemingly wouldn’t have the impact that people initially thought. (And yes, there’s even a “we’re doing it for the children” angle herein.)

Jones’ chief-of-staff Josh Cohen explained how the bill came to be. It’s about relocating an existing billboard from the foot of the South Street Bridge, he said.

“It obstructed the view from the cafeteria of the new CHOP facility. So, CHOP asked the billboard company if they could relocate the billboard,” Cohen explained of the Roberts Center for Pediatric Research which opened in 2017. “After an exhaustive search, they found a suitable location in our district.”

That suitable location – a narrow strip of land between the Schuylkill Expressway and CSX railyard – never should have been zoned as a “Parks and Open Space” area as it’s more industrial, Cohen maintained.

Ruing “a lot of misinformation” being bandied about, he also made one important point that, if true, should soothe many concerns.

“You cannot see the billboard from any point in the park,” he said.

All of this isn’t to say more billboards are necessarily a good thing. They can be eyesores and distractions.

But this one doesn’t seem to be worth a heated battle, provided Cohen’s right about sight lines from the park. That said, there’s value to the mounting opposition.

If this case establishes a red line that staves off any billboards viewable from parks now, or in the future, it’s a conversation worth having.