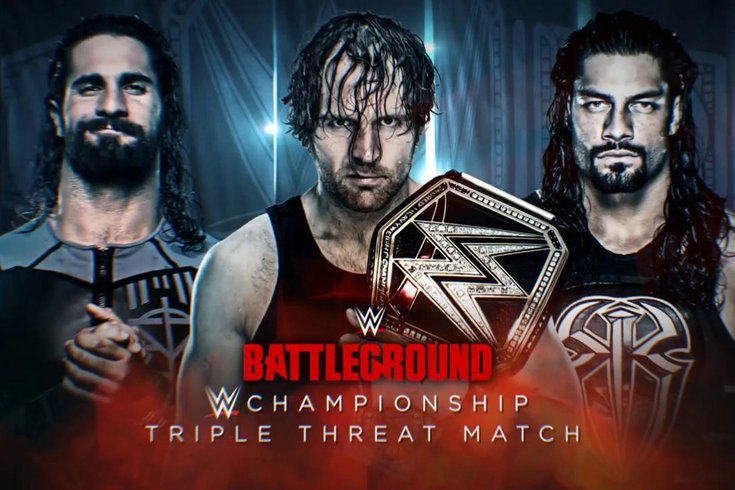 More than two years ago, Seth Rollins began a chain of events that would ultimately lead to the main event of Battleground.

While politically we can make many jokes about the state of Congress in the nation’s capital, WWE will present their own version of Battleground this Sunday night at the Verizon Center in Washington, D.C. Roman Reigns is back from his 30-day suspension after failing a wellness test, Dean Ambrose is the WWE Champion after defeating Seth Rollins on SmackDown’s first permanently live episode on Tuesday night, so Reigns comes in without any fanfare. Will he walk out of Battleground with the title?

We’ve also got two six-man tag team matches, the United States and Intercontinental Championships on the line, and a women’s grudge match. We haven’t seen many of those in recent years. I like it.

Here’s what I think will happen on Sunday night in the nation’s capital:

So, Bayley wasn’t drafted on Tuesday night, so many think she might wind up being the mystery partner for Banks in this match as a way of getting her up to the main roster. I’m still not sure why Bayley wasn’t drafted – she’s one of the most over acts in WWE today – and I’m not sure pairing her with Banks on Sunday is the best way to introduce her.

I mean, I’d love to see Bayley on the main roster right now. But this entire storyline surrounding Banks, Charlotte and the Women’s Championship is likely leading to Banks finally winning the title at SummerSlam. The introduction of Bayley might actually overshadow Banks’ pursuit of the title.

Sure, it’ll depend how she’s depicted. Maybe someone attacks her during the match and she begins a feud with them and the spotlight is still on Banks and Charlotte. Bayley would get the biggest pop out of all four women. I’m not sure WWE wants that, regardless of how popular she is. But I’ll go with the good guys and the official beginning of Banks’ road to the Women’s Championship.

Your winners: Sasha Banks and her mystery partner

The New Day (c-Tag) vs. The Wyatt Family

While The New Day was drafted as an entity on Tuesday night to Raw, the Wyatt Family was split up as both Bray Wyatt and Erick Rowan were drafted to SmackDown and Braun Strowman was drafted to Raw. Luke Harper is still a wild card as he’s recuperating from a knee injury, but it wouldn’t surprise me if he heads to SmackDown and re-forms the original Wyatt Family for a third time.

But at this point, is it worth it? Probably not. WWE has completely ruined the group and Wyatt himself, cutting them off at the knees from becoming huge stars. No star is allowed to be bigger than WWE. But I digress.

Xavier Woods has shown some great subtle characteristics of being brainwashed by Wyatt, but I ultimately think New Day wins this one. I know the Wyatts as a whole can use a big win, but when has that ever happened in the past three years? With the group now disbanded, at least for now, it doesn’t make sense for them to get the win. Woods may get the pin here.

Your winners: The New Day

Randy Orton is returning to in-ring action next month at SummerSlam and will oppose The Beast, Brock Lesnar. As of now, WWE has not disciplined Lesnar for his two failed drug tests, one from out-of-competition and one from in-competition leading up to UFC 200. WWE has not mentioned the failed tests on television, and I’m sure it’s a calculated move with Reigns coming off suspension from a WWE Wellness Policy violation this week.

I don’t know if Orton will mention it, but it could be the best way to begin the build to his program with Lesnar. They’ll have four weeks to build to a match that might just headline SummerSlam.

If WWE was planning on having a surprise appearance by Lesnar, I’m not so sure they’ll do that now. They’re in damage control and will try to spin the story every which way to make Lesnar remain legitimate to their audience.

Unless they suspend him. Which they could. Stay tuned.

Lynch was the first women’s draft pick for SmackDown on Tuesday night, so I’ve got to believe she’ll get a big win here. Her feud with Natalya has been built very well and the hatred they’ve shown for each other on screen comes across as genuine and not forced. I like the way these two work together, and I think this match has a chance to surprise everyone and be one fo the better matches on the card.

With SmackDown currently not having a Women’s Title, Lynch could make a good first female champion for that brand. Stay tuned.

I’ve enjoyed the various promos Young and Backlund have put together in recent months, but Young becoming the No. 1 contender to Miz’s Intercontinental Championship was completely out of nowhere, which is why I think he could actually win the title Sunday night.

That’s where my thinking is at. That’s how little sense this match makes. There’s been no time for buildup, and when Miz disrespected Young on Miz TV last week, Young just laughed it off. That’s not how you build to a title fight. While I could see a double title swap, I’ll pick the champions to retain their titles in regards to the secondary ones in the Intercontinental and United States straps.

Another match that has virtually no build. Ryder actually challenged Rusev to a United States Championship match for the July 4th edition of Raw. That never happened. How are we supposed to take Ryder seriously now?

One thing that could work in his favor is his NXT tag team partner, Mojo Rawley, being drafted to SmackDown. Could he possibly help him win the title? Sure. But I like Ryder better in a tag team with Rawley as the Hype Bros. rather than as a singles champion that’s being made to look like a fool week in and week out.

If WWE is considering a serious run for Ryder with a title, I won’t mind a title switch here. I love title switches, anyway. But I’ll go with the champion to retain because I won’t believe it until I see it.

Everybody, including yours truly, thought that Zayn and Owens would be drafted to different shows and this would be the last battle between two hated rivals.

But it might not be. Both Zayn and Owens were inexplicably drafted to Raw. So this might not be over. And I could see some kind of cheap finish in this match now where a rematch at SummerSlam in August might be the final battle between the two.

Honestly, a great feud like Zayn and Owens deserves that platform of the second biggest WWE pay-per-view of the year. Here’s hoping they get it. I’ll say a win for Owens here and a win for Zayn in an eventual rematch. If it happens.

One thing’s for sure. This match might steal the show.

Enzo Amore and Big Cass were already over when they were called up to the main roster, but aligning them with Cena was a good move to get them over with the younger audience. People love Amore and Cass, and they’re beginning to respect Cena. The boos and “Cena sucks!” chants have lessened, and they’re more so a satirical chant now.

On Raw, there was a tease of possible dissension in the Cena/Amore/Cass camp as Amore accidentally hit Cena before Styles was able to hit the Styles Clash on him for a victory. We could see something like that again, but with The Club heading to different shows, I don’t know why they’d win this one. It’s the same logic for the Wyatts/New Day match. Wyatts are splitting, so why should they win?

We’ll certainly see some storyline advancement as a result of this match. It wouldn’t surprise me if we see Amore/Cass vs. Anderson/Gallows and Cena vs. Styles at next month’s SummerSlam. This match might rival Zayn/Owens regarding stealing the show.

The match we’ve waited almost two years to see is here. Why isn’t it happening at SummerSlam next month? Simple. SummerSlam sells based on the name alone. It’s the clear-cut second most important WWE pay-per-view of the year, and they treat it as such.

With this Triple Threat Match taking place at Battleground, it makes this pay-per-view that much more important. It’s the last one before the brand extension officially starts Monday night when both Raw and SmackDown are expected to have different sets and really make it feel like two unique, distinct shows. That might also be the reason this match is happening now – the last big match before the roster is split in two.

Ambrose as WWE Champion has been strange, only because I never expected him to win the title, well, pretty much ever. He’s done a good job as champion since winning it in June at Money in the Bank, and with Reigns being suspended the last month, the Ambrose-Rollins feud has been rekindled and remains one of the best feuds in recent memory.

Will Reigns’ re-emergence kill that story? Who knows. I like the chase for a championship a lot more, and WWE hasn’t had a heel champion since WrestleMania. I think Rollins steals the title here in what could become one of the best Triple Threat matches in history.

Aiming pretty high for this one. I hope we’re not disappointed.

There could be a rematch at SummerSlam with a stipulation added. I wouldn’t mind that at all. We’ll probably see a second world title introduced for SmackDown since Rollins is currently on Raw.

This pay-per-view on paper is shaping up to be one of the better ones in terms of the higher profile matches. Darren Young and Zack Ryder being in title matches with how they’ve been portrayed on television up to now is weird, but from here on out, it’ll be about how they’re booked. Rusev shouldn’t lose his title anytime soon, and there’s nothing more I would love than for The Miz to lose his Intercontinental Championship. I’m digging his character, especially with the addition of Maryse, but he just shouldn’t be champion. But the top three matches should be very good, and the New Day/Wyatts six-man could deliver. I’m pumped.

Check back here Monday morning for the Battleground review.