WWE Night of Champions review: Kane re-emerges with a mask and targets Rollins 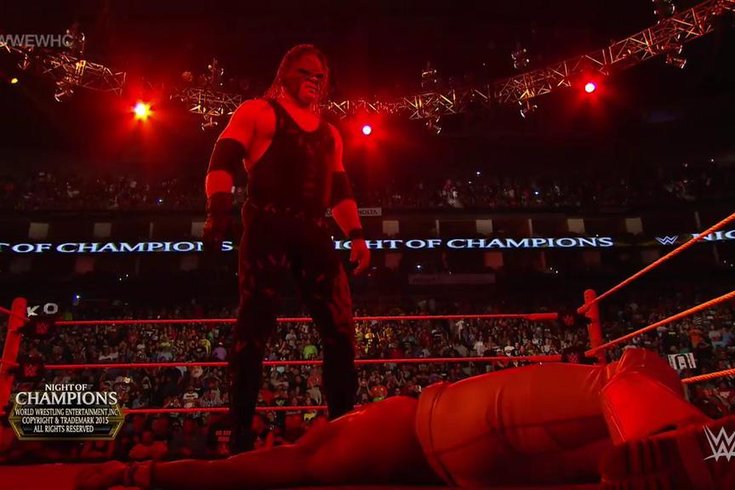 Kane made Seth Rollins pay for his sins after he retained the WWE World Heavyweight title at Night of Champions.

Houston’s Toyota Center welcomed WWE’s Night of Champions on Sunday night, less than an hour after the Eagles were embarrassed at Lincoln Financial Field by the Dallas Cowboys. I went into this show in a depressed state and probably was more critical about what I watched than I would be had the Eagles not pulled off that atrocious performance earlier in the day.

During the Kickoff Pre-Show, it was announced that Seth Rollins would be pulling double duty back-to-back, which I said in my preview I didn’t think would happen. It turns out that there certainly was a reason for that, as the Demon Kane made his return to WWE, and effectively left The Authority and attacked Rollins. More on that later.

Also, we got our main event for Hell in a Cell given to us in a promo after the Intercontinental Championship match, which will pit “The Beat Incarnate” Brock Lesnar against The Undertaker on October 25th. I called this match after SummerSlam, and I’m pumped to see it happen. This will likely be the blowoff, hopefully, to the feud between the two. We probably won’t even be reminded of their awesome Hell in a Cell match from October 2002, but that’s not really needed because it was 13 years ago, so I’m OK if they decide to not bring that up. I’m also OK if they do decide to.

Lesnar will also be a guest on the Stone Cold podcast next month. Could they build to a WrestleMania 32 match beginning then? We’ll see.

Let’s get to Night of Champions:

Neville and the Lucha Dragons vs. Stardust and The Ascension [Cosmic Wasteland]

Neville has been quite on a roll with stacking up Pre-Show victories since he can’t crack the regular card, but Sunday night was different.

It was an OK match for the pre-show, but I thought the ending was pretty good. Neville went to the top for the Red Arrow but was thwarted by Viktor, who was then pushed into Neville by Stardust, who then hit the Queen’s Crossbow for the victory.

Neville’s Pre-Show winning streak has been broken! Not sure how I feel about that.

Your winners: Stardust and The Ascension

I was surprised this opened the show, but I was happy to see Kevin Owens exit the champion. The match was OK, and sort of what I expected. Ryback isn’t the greatest athlete, and neither is Owens, but I just think this feud lacked the juice needed for a really hot opener. And because of that, a title change is always nice.

Owens pulled a great heel move that we don’t see much of anymore and raked the eyes of Ryback as he was setting him up for Shell Shocked, and was able to roll him up for the victory. Alas!

Without Lana, who’s recovering from wrist surgery and will reportedly be out of action for four months, Dolph Ziggler took on Rusev and had to keep eyes in the back of his head open for any antics from Summer Rae. Turns out, he didn’t really need to.

During the finishing sequence, Summer Rae hopped on the apron and inadvertently got knocked into the ring after Ziggler was pushed into the ropes and she fell over top of them. The ref, ostensibly fed up with Summer Rae’s shenanigans on the apron, sent her backstage. Well, he tried to, at least.

Summer Rae, back on the apron, took off her heels and threw one to the outside and the other toward the ref, who ducked and hit Rusev in the upper chest, which put him right in line for a Zig Zag by Ziggler and gave him the win.

So that’s cool. We’ll likely get another angle of Rusev yelling at Summer Rae for costing him a match, just like he did with Lana after WrestleMania. New and original!

The New Day’s promos before their matches have quickly climbed to “must-see” status. Sunday night was no different, as the trio once again entertained the masses – the masses just don’t know it yet.

Maybe I shouldn’t have expected a clean finish, and that was probably for the best in this match. Xavier Woods interfered in this match, causing a disqualification, but that wasn’t all he did.

Woods took a table from underneath the ring and set it up, thinking he and his boys would lay waste to the Dudleys. Only the Dudleys got rid of Woods’ boys and set him up for a 3D through the table, at least exacting some revenge from the finish.

Your winners via disqualification: The Dudley Boyz. The New Day retains the Tag Team Titles.

I never like predicting DQ finishes, which is why I rarely do, if at all. But this is probably one I should have seen coming.

Based on what we witnessed on Raw last Monday, there was no reason at all Charlotte shouldn’t have won her first Divas Title as a member of the WWE main roster.

I really liked the psychology of this match, with Charlotte battling a leg injury for much of the match, and Nikki trying to exploit that. That’s exactly what’s been missing from Divas matches for as long as I can remember.

After a good, long match, Charlotte locked in the Figure Eight and made Nikki tap. Which could have been done last Monday, but whatever.

And Ric Flair cried like a baby, so you knew there would be no Dusty finish here. Good stuff.

Another moron invaded the ring by getting by security before the match started, and was swiftly tackled. Too bad if he had a weapon on him, he had enough time to do damage to both Reigns and Ambrose, and the WWE security staff once again looks terrible. They need to get that fixed pronto.

Y2J IS BACK! For the time being, at least. Chris Jericho was the mystery partner of Reigns and Ambrose, but was basically used to make the ridiculously beastly Braun Strowman look good. And he did a good job if doing that.

Strowman did one of those awesome powerout from a pin moves by just bodypressing Jericho off of him during a two-count, then took control to get a win for the Wyatt Family. Strowman choked out Jericho with his bearhug – the same bearhug that laid out Jimmy Uso on SmackDown two weeks ago.

After the match, Ambrose and Reigns went over to Jericho, who got up and stormed past them, bumping into Ambrose and leaving the ring. Is this leaving the door open for Jericho to return for a full-time program? I’m not sure, but it almost certainly is planting seeds for a future program with the Ayatollah of Rock and Rolla.

Rollins and Cena never have a bad match, and this title match was more proof of that. Cena has improved drastically with the new crop of talent that’s emerged the last few years that he’s definitely on the best run he’s had in his WWE career thus far. I wasn’t upset with how the match ended because I thought it was imperative for the United States title to get off of Rollins and back on Cena, and this was the best way of doing that.

But wait, Rollins wasn’t done yet!

This match truly passed the torch to Rollins, though WWE would want you to believe he’s had it since March. It wasn’t until Sunday night where I was really impressed with Rollins’ ability to go from a fantastic match with Cena to a good match with Sting that he had to carry. He deserves all the credit in the world for that.

And Rollins deserves that credit because Sting was out of it for most of the match. Rollins put him through an announce table, where Sting hit his head on the monitor, and gave Sting two powerbombs into the turnbuckle, which clearly shook Sting up. Sting eventually would collapse while ducking a clothesline attempt by Rollins, and the referee called for the ringside doctor to come in and check on him. After about a minute, the match continued.

Rollins and the ref could be heard calling the remaining spots in the match, and it seemed like a rushed finish due to the way it ended. Sting tried locking in the Scorpion Death Lock for a second time, but Rollins rolled through and was able to pin Sting with a modified small package.

After the pinfall, Sting wasn’t shown on camera as he was tended to by the ringside doctor and other officials, and was escorted backstage.

After the quick finish, Sheamus came out and wanted to cash in his Money in the Bank briefcase, which has been teased for what seems like ten times already since he won the briefcase back in June.

Another show, another tease. Before the bell rang for Sheamus’ title match, the Demon Kane returned and set his sights on Rollins. He delivered a chokeslam and Tombstone piledriver to the champion, and threw in a chokeslam to Sheamus while he was at it. It looks like Kane and Rollins are on a collision course at Hell in a Cell. I’m OK with that.

Despite the Eagles’ pathetic loss to the Cowboys, I wasn’t as critical as I thought I’d be watching this event Sunday night. I loved Charlotte winning, the end of the Tag Title match was perfect to build to more matches between the two teams, and Owens winning the Intercontinental Championship set a good precedent for the evening.

As for the people who want to complain Sting is now 0-2 in WWE, I’d save your breath – or fingers for that matter. Sting admitted in a Rolling Stone interview that he’s had his time. He has no problem putting over the younger talent, because that’s what he’s supposed to do. So before you think he deserves a WWE World Heavyweight Championship reign over the likes of Rollins, Sheamus or even Cena, maybe take off the rose-colored glasses.

Hope you enjoyed the show, and check back here at PhillyVoice.com Tuesday morning for my Monday Night Raw review.