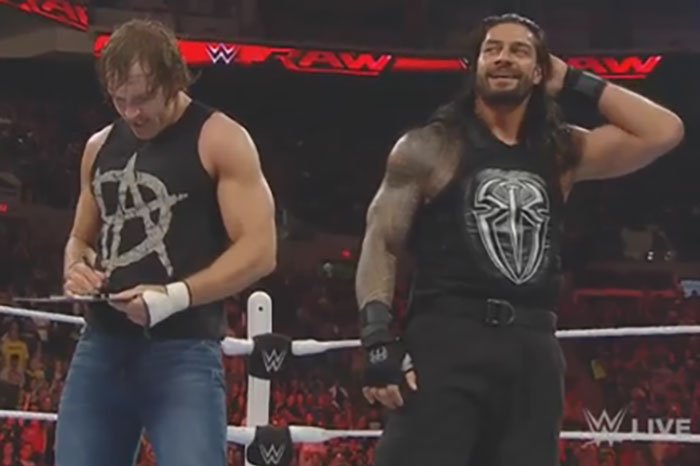 It took just over three hours to sign the contract, but Dean Ambrose will officially challenge Seth Rollins for the WWE World Heavyweight Championship on Sunday night.

With Elimination Chamber just six days away, and available for free to new subscribers to the WWE Network, the participants in all of the matches were front and center on Monday Night Raw live from the Nassau Coliseum in Long Island.

This would be the last WWE event at Nassau Coliseum before it closes its doors for a year and a half to renovate and reopen in December 2016. WWE chairman and CEO, Vince McMahon, even gave a farewell speech to the Coliseum, which wasn’t broadcast on television.

The Coliseum was the first-ever host of Saturday Night’s Main Event and a lot of other WWE history through the decades so the company wanted to make sure it gave its New York fans a great last show. I’d say the fans got their money’s worth.

We had some of the cast of Entourage as the guest hosts for Raw, and they didn’t have much of an impact on the show, which was good. They simply had a couple backstage appearances with the Divas and The Authority, and introduced Zack Ryder as John Cena’s opponent for his U.S. Open Challenge, so they were limited in exposure.

Oh yeah, and Kevin Dillon decided to get in the ring during Cena and Ryder’s match before realizing he needed to get the hell out of there in what made for a somewhat comical moment. With the build for Sunday’s Elimination Chamber event full-throttle and excellent, there wasn’t much need for this guest host stuff, but WWE will take any kind of extra publicity this may garner.

Not many people were too happy when The Authority, with WWE World Heavyweight Champion, Seth Rollins, opened Raw for what seemed like the seventy-second time in a row [it’s probably pretty close to it.] It was more of the same stuff of Rollins saying how he’s going to beat Dean Ambrose Sunday at Elimination Chamber, stuff we’ve already heard before. A lot.

Triple H then said that even though they had a verbal agreement in place for the Rollins-Ambrose match, he needed Ambrose’s signature to make it a done deal. Ambrose obliged, but not without some backup in his old and new best friend, Roman Reigns.

Stephanie McMahon decided to put them in the main event, which happened to be the first match of the night, against Kane and Rollins, where Ambrose pinned the champion. One would assume that means Rollins will defeat Ambrose Sunday at Elimination Chamber, but it’s a good way to get people interested going into Sunday’s event by seeing Ambrose pin Rollins on free television. Pro wrestling 101.

All that was left was for Ambrose to sign on the dotted line, and he was given until the end of the night to do so. However, a backstage skirmish with J & J Security led Ambrose to punch a cameraman thinking it was someone attacking him from behind.

This resulted in Rollins and Triple H having Ambrose arrested and in danger of not making it back to the arena in time to sign the contract to make his match against Rollins for the WWE World Heavyweight Championship official. However, near the end of Raw, published on WWE’s YouTube channel and then broadcast on television, video showing that Rollins was responsible for shoving the cameraman into Ambrose surfaced, bringing into question the legitimacy of Ambrose’s arrest.

We didn’t have to wait long for the story to come full circle, as this led to Ambrose’s apparent release from custody. He drove the police vehicle that was used to take him out of the arena back into the arena and confronted The Authority with help from Reigns.

Ambrose and Reigns would eventually get the upper hand and Ambrose signed the contract before the night was over. Close call, for sure.

It looks like Rusev has moved back to Bulgaria, where he originally hailed from before defecting to Russia. Carrying the Bulgarian flag and his Bulgarian tights, Rusev destroyed R-Truth in a match before begging Lana to come to the ring so he could talk to her. After what seemed like would be a happy ending for Rusev and Lana, Rusev had to go a step too far and demand Lana say those three words: “I was wrong.”

Lana refused and walked away, was met by Dolph Ziggler on the stage, and the two kissed in front of Rusev, which prompted the Bulgarian Brute to throw a fit inside the ring instead of run after Ziggler. Later in the show, Rusev attacked Ziggler after his match as Lana looked on.

Safe to say @RusevBUL is not taking the breakup well... #Raw pic.twitter.com/FhtntAhvAR

As far as the angle used to split Lana and Rusev, I think WWE has booked it really well, despite Ziggler really having no place in the story other than being the “other guy.” With that said, I think the Rusev-Ziggler feud will make for a good subplot in Sunday’s Intercontinental Championship Chamber match.

The Miami Herald’s Scott Fishman may have uncovered the inspiration for this storyline.

United States Champion, John Cena, gave an impassioned promo leading up to his match with NXT Champion, Kevin Owens, at Elimination Chamber on Sunday. Then we had the hometown boy, Long Island’s own Zack Ryder, go toe to toe with Cena for his United States Championship in a fantastic match which ended with Cena once again defeating the challenger.

Storyline friends, both Ryder and Cena raised each other’s arms after the match, and then the cast of Entourage hit the ring and did the same. It was then that Owens made his impact and hit the ring to destroy Cena with another pop-up powerbomb. They’re really pushing Owens hard the last two weeks, but it only makes me believe Cena will be the victor come Sunday night. On the other hand, they’ve made Owens look tremendously strong and hopefully the audience realizes they’re seeing a special performer in Owens. Time will tell.

Once again, it feels like WWE has put the Divas on the backburner, as the match between Paige and Tamina was just there. There was virtually no build that occurred and the Divas Championship will be on the line in a Triple Threat Match on Sunday with Nikki Bella defending her title against Paige and Naomi. Naomi cost Paige the match, but there were no backstage interviews during the broadcast which just reeked of a laissez-faire attitude of which the Divas could not crawl out. Let’s hope for a surprisingly spectacular match at Elimination Chamber.

Each year, WWE puts together a video package honoring the lives lost battling for our freedom, but this year, WWE put together one of the best video packages I’ve ever seen. With superstars joining in unison with a speech from Ronald Reagan, along with stills of the people affected by those lost in combat, I’m not sure there’s ever been a more powerful message WWE has sent in honoring those lost lives. It was truly awesome.

Dean Ambrose and Roman Reigns d. Seth Rollins and Kane by pinfall after Ambrose pinned Rollins with a backslide.

Rusev d. R-Truth by submission via The Accolade.

Sheamus d. Dolph Ziggler by pinfall via a Brogue Kick after Rusev distracted Ziggler. Rusev attacked Ziggler after the match.

Tamina d. Paige by pinfall via a Samoan Drop. Naomi hit Paige from the outside, allowing Tamina to hit the finisher.