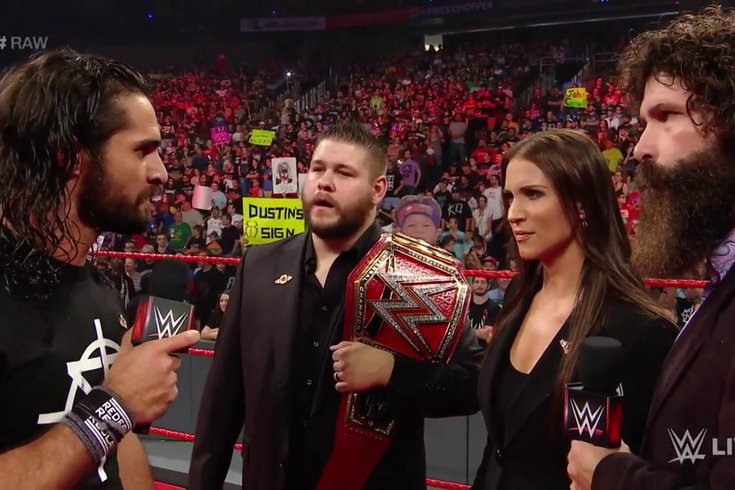 Kevin Owens celebrated Monday night but found himself the possibility of two challengers at the next Raw pay-per-view.

Labor Day signals the unofficial end of summer every year, and there's usually a big episode of Monday Night Raw to go with it. That’s what I was expecting Monday night from the Sprint Center Arena in Kansas City, Mo., especially seven days removed from Kevin Owens becoming the new WWE Universal Champion.

It didn’t feel like that. The road to Clash of Champions began and we have our main event, but other than the opening segment, we saw Bo Dallas get a win and Enzo Amore and Big Cass get beaten by the Shining Stars. It wasn’t very good.

The show opened with Mick Foley confronting Stephanie McMahon backstage earlier in the day with Foley wondering why his boss hasn’t messaged or called him back all week. After last Monday’s ending to Raw, things seemed to be very tense as the Raw commissioner swore she had no idea Triple H would interfere in the main event to crown a new WWE Universal Champion.

The balloons dropped as the celebration for Kevin Owens began shortly after. He made sure to admonish the crowd for chanting, “You deserve it!” at the end of last Monday’s show, and the crowd in Kansas City who began chanting that.

The lines were drawn. Seth Rollins interrupted the celebration and barked at McMahon because he didn’t believe she didn’t know Triple H would interfere in the main event the previous week. He then attacked Owens, who verbally berated him. Fed up with Rollins, the commissioner suspended him indefinitely.

But the general manager stepped in. Foley overturned McMahon’s decision and, instead, rewarded Rollins with a championship match against Owens at Clash of Champions on September 25. He also made Rollins vs. Chris Jericho and Owens vs. Sami Zayn official for the program.

Rollins defeated Jericho in their match with the Pedigree.

As for the main event, that took on an old rivalry of epic proportions. Zayn admitted he was jealous at Owens’ success in a backstage interview before the match, and Owens basked in his own glory. Zayn said he would be the WWE Universal Champion eventually, and that he wouldn’t need Triple H to hand it to him on a silver platter.

It was a good television match – definitely not anything like their previous encounters, one which could be considered a Match of the Year candidate. Owens got the win with a powerbomb, but during his celebration, the music of Roman Reigns hit and the former champion made his way down to the ring and stared down the current champion.

Owens’ tag team partner made his way to the ring behind Reigns and before Jericho could do anything, Foley’s music hit. Despite doing nothing, Reigns found himself booked in a match against Owens courtesy of the general manager for next Monday’s Raw. If Reigns wins that non-title match, he’ll be added to the main event at Clash of Champions, making it a Triple Threat Match.

It makes sense in theory, but Rusev’s been absent for a while. He should return soon and exact revenge on Reigns, who left him with battered ribs at SummerSlam in a match that never even happened. The story between those two certainly isn’t over.

But Rusev could also return at the Clash and cost Reigns the title if Reigns does indeed win next Monday. There are a few different moving parts here, but everything seems to make sense so far. Except for the fact that Foley rewarded Rollins for attacking Owens and Reigns for doing nothing.

Reigns gave Jericho a parting gift after the announcement.

Bayley gets a win over the WWE Women’s Champion

For some reason, WWE hotshotted Bayley vs. the WWE Women’s Champion, Charlotte, on this edition of Raw. I’m not sure why a slow build to a match at Clash of Champions would have been so terrible, but somebody in creative thought it wasn’t necessary to wait. Labor Day holiday? No one will remember? Wins and losses don’t matter?

Who knows. Especially because the Women’s Champion was pinned by Bayley after a miscommunication between Charlotte and Dana Brooke – still in her corner – allowing Bayley to hit the Bayley-to-Belly suplex for the win.

In a certain rematch, I’d lean toward Charlotte. Even though there was no reason to have her get beaten on Monday night, even if it was Bayley.

Sasha Banks had some bad news

Speaking of the women’s division, the former WWE Women’s Champion, and “Boss,” Sasha Banks, made her return to television on Monday night. She took us all on a roller coaster ride, invoking the previous women’s divisions in professional wrestling that were relegated to bra and panties matches and evening gown matches, and was very emotional about it. Everyone thought the worst possible scenario for her – that she was about to retire.

Fresh after costing Charlotte a win against her match vs. Bayley, Brooke made her way to the ring during Banks’ promo and said she was going to finish the job her mentor started. But Banks was more than ready and after a cheap shot attempt by Brooke, Banks locked her in the Bank Statement and said the bad news was for Charlotte. Why, you ask? Because at Clash of Champions, Banks will face Charlotte in a rematch for the Women’s Championship.

That was an awesome segment from Banks all around. She had the crowd in the palm of her hand and never tipped it. Fantastic work.

Heading into the third match of this series, the storyline was Cesaro’s lower back injury – contusions to his lumbar spine to be exact – from last Monday after he was back bodydropped into the LED-laden ring post. All week on social media, Cesaro played up the injury, but was cleared for completion in the ring to continue the best-of-seven series against Sheamus on Monday night.

Maybe he should’ve sat this week out. It was a quick match compared to their previous two and Sheamus notched the win with a Brogue Kick to take a 3-0 series lead. Cesaro will have to now win four matches in a row for a championship opportunity.

• Seth Rollins d. Chris Jericho by pinfall via the Pedigree.

• Nia Jax d. Ann Esposito by pinfall via a powerslam.

• Darren Young w/ Bob Backlund d. Jinder Mahal by pinfall with the Gut Check. Titus O’Neil was on commentary during the match and tried distracting Young, but it didn’t work. The two brawled outside the ring after the match.

• Braun Strowman d. Sin Cara via countout. Strowman attacked Sin Cara on the outside of the ring after the match.