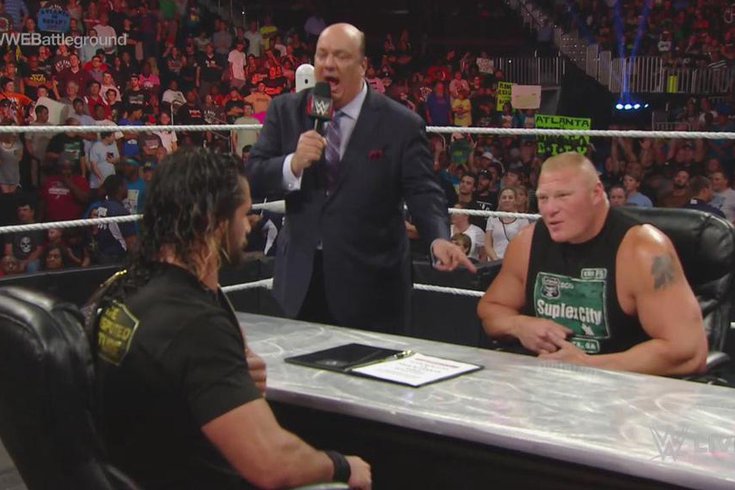 Brock Lesnar and Seth Rollins signed the contract on Monday night for Sunday’s match for the WWE World Heavyweight Championship.

Atlanta’s Philips Arena was the host of the final Raw before Battleground, and it may have been the greatest go-home Raw for a special event in the last few years I can remember. It had everything – good to great storylines, good angles, and some really good matches. Then again, any show with a Lesnar appearance always seems like a good or great show.

With Lesnar single-handedly destroying The Authority just weeks after Seth Rollins had seemingly reformed the group, it now looks like The Authority is no more.

I’ll have your Battleground preview here at The Philly Voice later this week.

Here are the main stories going into Battleground after Monday’s go-home Raw:

With his sights set completely on Battleground this Sunday, Brock Lesnar made his way to the ring to start off Raw, with Paul Heyman in tow, of course. Heyman listed much of Lesnar’s accomplishments, those of which include: defeating Dwayne “The Rock” Johnson at Summerslam 2002, defeating the Undertaker for the first time ever at WrestleMania, decimating John Cena at last year’s Summerslam, and the eventual domination of the WWE World Heavyweight Champion, Seth Rollins, at Battleground.

Rollins, along with Kane, who was back from his vacation to Hawaii with no visible tan at all, interrupted Heyman and got a little testy with The Beast. Probably the best moment of Rollins’ promo was when he flubbed over the word “inanimate,” much to the delight of the crowd and Lesnar, who was laughing in the ring. That didn’t stop Rollins from getting his point across, and that is that he is everything that’s right about WWE. Rollins calls Lesnar a thug, criminal and vandal. Rollins also said he would burn Suplex City to the ground. Lesnar responded, “I can take you to Suplex City tonight, bitch.”

Kane interjected and said he put together a contract signing between Lesnar and Rollins for the main event segment. Nothing ever goes wrong during those. And nothing good did happen – for Kane.

After both Rollins and Lesnar signed the contract for Battleground, Heyman smelled a trap. He was right. Lesnar flipped the table over to find an axe handle lying underneath it. He flipped the table back over, put the axe handle on top of it and let Rollins grab it back before picking up the table and throwing it at him.

Rollins would scamper away during this, but would come back to the ring and attack Kane somewhat randomly in a fit of rage. I’m not sure where that’s going, or if it even needs to go anywhere. I really do not want to see a Rollins-Kane feud. I don’t think anyone does. But I have a feeling… and it’s not a good one.

The Divas division finally has some life! Becky Lynch, Charlotte and NXT Women’s Champion, Sasha Banks, all made their official main roster debut with WWE on Monday night, and I absolutely loved the segment that was booked. It was perfect because it wasn’t before or after a match – it was a segment dedicated solely to introducing the new Divas and honestly, it couldn’t have been more perfect.

The women all brawled in the ring with each of them hitting a couple of signature spots, and it ended with each of the NXT women call-ups taking control of the ring in an awesome submission spot.

We just missed having both the NXT Champion and NXT Women’s Champion on a Monday Night Raw episode together. Damn it, Kevin Owens.

Rusev accepted Cena’s open challenge in a great play off of their past, but Owens didn’t see it that way. He came out with a mic and ran down Rusev, who ran him back down. “Listen you stupid French-American whatever you are. I was here first. And besides you have two stupid first names. Kevin and Owen. Which one is it? Make up your mind.”

But I also loved the fact that Owens was getting in some mic work on others instead of Cena. It shows he can really adapt his promos to anyone he’s working with, and that he’s already found a groove. Cesaro came out and he, Owens and Rusev all brawled as Cena looked on with the slyest grin I’ve ever seen.

And that sly grin is somewhat interesting. Rusev played the sympathetic figure after the Triple Threat Match and Cena acted like the heel who wanted to take advantage of a broken down opponent. Not very Cena-like. Owens came out and attacked Rusev for the DQ, but I don’t think this is the end of Owens-Rusev. And I hope Cesaro is still in the mix, too.

We finally saw some of the aggression I was hoping from Roman Reigns, as he attacked Bray Wyatt before his match with Dean Ambrose. Wyatt retreated after hitting Reigns with his lantern, but it was refreshing to finally see some crazy rage from Reigns. I guess I can’t complain too much, and I’m glad we got to see that on television, even if I think it was a couple weeks late. But, this is the go-home show to Battleground, so it makes complete sense.

Cody Rhodes returned to action as Stardust for the first time since his father, Dusty Rhodes, passed away last month. I didn’t mind Rhodes playing a character and not being “Cody Rhodes” in his first match back. After all, wouldn’t you think The American Dream would want his son to go out and entertain the best way he knows how? I sure as hell think he would. And nobody knows that better than Cody himself.

JBL had a great line paying homage to Dusty, saying Cody could hit the pay window after the match.

• Randy Orton and Ryback (c-IC) d. Sheamus and Big Show by pinfall after Ryback splashed Sheamus after an RKO by Orton. Show chased off The Miz, who was doing commentary.

• Dean Ambrose and Bray Wyatt fought to a No Contest. Roman Reigns attacked Wyatt, but Wyatt eventually got away.

• Prime Time Players (c) and Mark Henry d. The New Day by pinfall after Henry hits Woods with the World’s Strongest Slam. Henry has been both a heel and a face in his recent run on television. Pick one, creative.

• R-Truth d. King Barret by pinfall via the Lie Detector. Yup, that King of the Ring win for Barrett did him absolutely nothing.

• Triple Threat Match for a shot at the United States Championship: Rusev d. Kevin Owens and Cesaro by pinfall via a superkick. Owens left the match and went backstage halfway through.

• Stardust d. Neville by pinfall via a rollup. Stardust held the tights for the advantage.