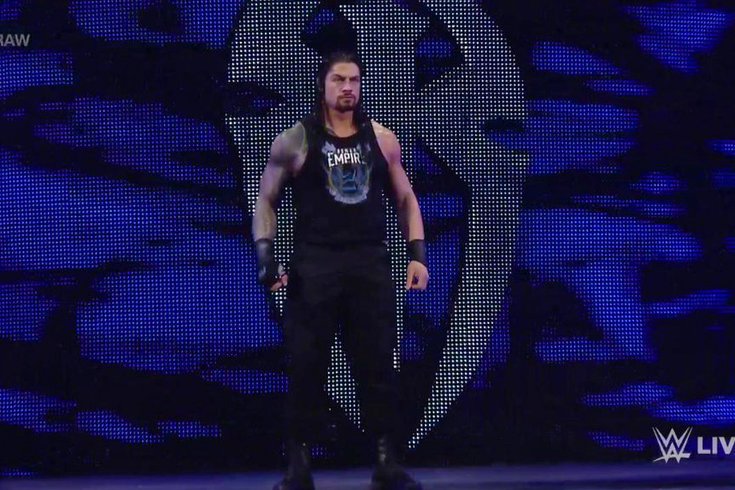 Roman Reigns returned to WWE on Monday night and decided to give the same beating to Triple H that he received three weeks ago.

Days removed from Roadblock in Toronto, WWE brought Raw to the CONSOL Energy Center (yes, the same building that the Philadelphia Flyers currently own), in Pittsburgh on Monday night. Many stars were booked on this week’s episode of Raw, which may be good news for fans heading to the Wells Fargo Center next Monday night for Raw in Philly. Yours truly will be in attendance, and I’m certain it’ll be the greatest wrestling show I’ll ever see. How’s that hype for you?

But, before Raw, FOXSports.com broke the story of the newest Hall of Fame inductee earlier in the day, as Jacqueline will officially head into the WWE Hall of Fame Class of 2016. A classic women’s wrestler in the height of the Attitude Era, Jacqueline’s talents weren’t only put in display in WWE. She’s had a long and illustrious career in the world of professional wrestling, so this honor for her is well-deserved, especially with it happening in her hometown of Dallas during WrestleMania weekend.

The WWE Hall of Fame ceremony will take place Saturday night, April 2nd, and be available live on the WWE Network.

Shane McMahon feels the wrath of the Taker

The Undertaker was in the house in Pittsburgh on Monday night to confront his opponent in Hell in a Cell at WrestleMania, Shane McMahon. But first, Vince McMahon made his was out to the ring to introduce his creation, and Taker came out in what remains one of the best entrances, if not the best, in professional wrestling history.

Before Taker even uttered a word, Shane McMahon made his way out to the ring. Shane O’Mac wasn’t pulling any punches. He called Taker a puppet and the Dead Man’s response was that nobody controls him. Shane then called Taker Vince’s bitch and that did it – Taker went for a chokeslam but Shane countered with punches. As he backed away from Taker, Vince pushed Shane back into him and right into a chokeslam. Taker then set his sights on Vince, who got out of the ring in record time.

We still don’t know why Taker should hate Shane. Maybe he hates the whole McMahon family? But they all hate themselves. It’s all still very weird. Shane calling Taker Vince’s bitch doesn’t even make sense because throughout his entire career, that’s never been accurate. We’ll see what happens next week in Philly. Hopefully, it’s something better.

Reigns returns, annihilates a Triple H into a bloody mess

The WWE World Heavyweight Champion, Triple H, graced Pittsburgh and the WWE Universe with a rather scathing promo saying any hopes that we have of being successful in life are pretty much never going to be realized. Basically, he said we all suck. What a heel.

Dolph Ziggler had heard enough, though. He came out and confronted The Authority and said he wouldn’t quit no matter how many times Stephanie and Triple H would try to force him. He wants a WrestleMania match, and Stephanie granted his wish – as long as he could beat Triple H.

In the 10 o’clock hour, Ziggler and Triple H fought in a really good match. Triple H is really hell bent on getting rid of any ring rust he has, but his matches against Ambrose and Ziggler really show that he doesn’t have much rust at all. There were many a near fall in this match, and it made Ziggler look like a million bucks. It would’ve been better if they booked the finish a different way, which I’ll mention shortly.

Triple H eventually got the win via his patented pedigree finisher, and not long after did Roman Reigns’ music hit and the challenger for the WWE World Heavyweight Championship at WrestleMania came out of the regular stage entrance (weird, right) and made a beeline for the champion in the ring. The two went back and forth before Reigns got the upper hand. They fought backstage where Reigns nailed Triple H with a flat screen television on his back, not too long after busting him wide open.

It was a good segment, but the fans weren’t feeling it as they booed Reigns as soon as he appeared. And there’s an underlying reason for that.

I said it on Twitter after this segment was over and I’ll say it here – having Reigns not involved in the finish of the match – which should have been a surprise Ziggler win over the champion – was one of the poorest booking decisions WWE could have made. Had Reigns arrived before the match was over and Ziggler got the win, and an eventual WrestleMania match (and they didn’t even need to add that stipulation for this match, but they did), the fans likely would have welcomed Reigns back in a much more positive way than they did.

Reigns was booed as soon as he tackled Triple H, and anyone watching could tell the reaction wasn’t going to go the way WWE wanted it to go. The brawl and backstage portion of it was really good, but I’m not sure it’ll do enough for Reigns. Next week in Philly, where he was cheered wildly in December when he won the WWE World Heavyweight Championship from Sheamus, the reaction could be a lot different. WWE’s got a huge problem on their hands heading into WrestleMania.

Heyman keeps Lesnar and Ambrose from probably destroying each other

Dean Ambrose addressed his loss to Triple H on Saturday night at Roadblock, but was rudely interrupted by Paul Heyman and his client, Brock Lesnar. Ambrose tries to convince Lesnar to come to the ring, but Heyman keeps him at bay before heading backstage. The only problem was that he forgot Lesnar, and the Beast stayed on the stage and then started making his way towards the ring.

Ambrose was prepared, though. The Lunatic Fringe pulled out a crowbar he was hiding in his jacket and was ready for a fight. Heyman sprinted back out and stopped Lesnar from getting into the ring and the two had a staredown as they went to a commercial. This match could pleasantly surprise a lot of people at WrestleMania, and I love the way they’re building it.

Later on in the program, Ambrose was backstage admiring his crowbar when he was approached by the Hardcore Legend, Mick Foley. Foley wanted to give Ambrose a little gift from his past, and it turned out to be a barbed wire baseball bat. Thanks, Mick!

Ambrose was quite happy about it.

A match between Chris Jericho and Neville ended abruptly as The Man That Gravity Forgot legitimately injured his ankle early in the match after his foot looked like it got caught in the mat when sliding under the legs of Jericho. Jericho would get himself disqualified by shoving the referee in what was undoubtedly an audible called by the ref and Jericho himself.

AJ Styles would quickly make his way out to the ring and hit Jericho with a Phenomenal Forearm and get a little bit of sweet revenge on his former tag team partner for turning on him last Monday night. Nothing is confirmed just yet for a WrestleMania bout between these two, but I’m sure that a confirmation of a match between the two is not far away.

"Neville sustained a left ankle injury on a baseball slide during his match with Chris Jericho," Dr. Chris Amann told WWE.com. "Initial X-rays reveal a fracture of the ankle. He will undergo further imaging today to determine the extent of the fracture and to determine if surgery will be necessary."

The New Day invoked the Freebird Rules for the first time in a while on Monday night as Xavier Woods and Big E defended the WWE World Tag Team Championships against the League of Nations’ Rusev and Alberto Del Rio. The opening match went almost a half hour in what was a nice change of pace for Raw, which usually opens with a long-winded promo from either Stephanie McMahon or Triple H.

The New Day would retain the tag team titles after Woods rolled up Rusev and grabbed his tights for the pin. But, that was the last good thing to happen for the champions on this night. The League of Nations attacked all three members of The New Day after the match and left them laying in the ring. The group looked strong and needed this type of angle to help them gain some momentum heading into WrestleMania. This certainly won’t hurt New Day because they’re over regardless, so it’ll be interesting to see how they respond to the beatdown.

The seeds were certainly planted for a full-fledged babyface turn for the Tag Team Champions.

Later in the night, the League challenged New Day for a match at WrestleMania. It’ll be interesting to see how they book this one. Non-Title 4-on-3 handicap match? Another Tag Team Title match with two different members of the League? Who knows?

Paige is back… sort of. Lana seems to be getting her nose in a lot of other people’s business right now. I’ve missed Paige.

These seeds have been planted for a while, but Ryback officially challenged Kalisto for a United States Championship match at WrestleMania after his win against Kalisto’s tag team partner, Sin Cara.

The Andre The Giant Memorial Battle Royal will also return at WrestleMania for a third consecutive year. I’m willing to bet this match is on the Kickoff Preshow again this year.

WWE has partnered with the V Foundation with Connor’s Cure.

• WWE World Tag Team Championship: The New Day (c) d. Rusev and Alberto Del Rio by pinfall after Xavier Woods rolled up Rusev and held his tights as he was distracted by Kofi Kingston.

• Sami Zayn d. The Miz by pinfall via the Helluva Kick. Kevin Owens was on commentary during the match.

• The Usos d. Adam Rose and Bo Dallas by pinfall via the big splash off the top rope. Dudley Boyz were on commentary during the match.

• Non-Title: Triple H (c) d. Dolph Ziggler by pinfall via the Pedigree. Roman Reigns came out after the match and beat down Triple H.

• Neville d. Chris Jericho by disqualification after Jericho pushed the referee after a near fall. Neville legitimately hurt his ankle during the match. AJ Styles came out after the match and took out Jericho.