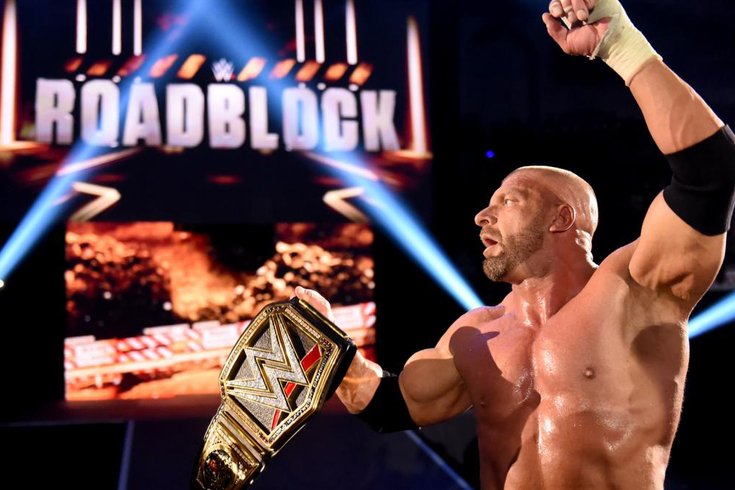 It was a hard-fought battle for Triple H, but he retained his championship after defeating Dean Ambrose on Saturday night.

WWE is on the Road to WrestleMania, but Saturday night in Toronto, there was a huge Roadblock in the way (That’s exactly the reason WWE changed the name of the event from March to WrestleMania to Roadblock, just so I could say that). Triple H defended his WWE World Heavyweight championship against the Lunatic Fringe, Dean Ambrose, in a match in which the outcome could completely change the landscape of WrestleMania on April 3rd.

There were only four scheduled matches confirmed heading into the event, but seven matches took place at Roadblock. The event ran a little under two and a half hours, as three hours was allotted for it on the WWE Network. I have to admit, it was a lot better than I had anticipated.

Here’s what went down at the Ricoh Coliseum on Saturday night:

The New Day came out to start the show for a promo before their tag team title match. They unveiled the official cereal of The New Day called ... Booty O’s!

And they’re now available on WWEShop.com, along with a T-Shirt. Though, it only says the box is available. So don’t expect any cereal to go along with it.

They also made fun of the League of Nations, which was equally as awesome.

The New Day (c) vs. Sheamus and King Barrett

WWE.com didn’t list this match as being for the tag team titles, but it turns out it was. If it was a non-title match, I would’ve picked Sheamus and Barrett to win to set up a future tag team title match, but since the match was for the titles, I didn’t think there was a chance for the champions to lose the titles.

There was a moment where I thought it was possible for the titles to change hands as Big E and Kofi Kingston were going for the double-team Big Ending, but Kofi took a nasty spill in the ring on his neck and was sent to the outside.

Luckily, Kingston was just selling and wasn’t seriously injured and hit Sheamus with a DDT on the outside as Big E hit the Big Ending on Barrett inside the ring and the champions retained their titles.

After the match, The New Day had a confrontation with the NXT Tag Team Champions, The Revival, and then responded on getting called out on Twitter by other League of Nation members, Rusev and Alberto Del Rio.

Chris Jericho cut what could be one of his best promos in a long time and completely turned on the Canadian crowd and said the city of Toronto smelled like an anus. Jericho, who was born in Canada, denounced the country and AJ Styles and really got the crowd to hate him. He’s perfect in his role right now and I’ve now officially bought into a Jericho-Styles feud that will likely culminate at WrestleMania.

Swagger was a weird opponent for Jericho, especially since he’s still a “Real American American,” so it’s not like the crowd was so into him winning as much as just seeing Jericho losing. The match was good, but there was no chance Swagger would win this.

Jericho submitted Swagger to the Walls of Jericho for the win.

NXT took center stage at Roadblock with one of the best tag team matches we’ve seen on a main roster show in a long time. The Revival – Dash and Dawson – put their NXT Tag Team Championships on the line against a tag team who will most likely land on WWE’s main roster after WrestleMania, Enzo Amore and Colin Cassady.

These two teams have developed quite a rivalry in NXT, so showcasing them this way was one of the better ideas this company has had. Unfortunately, Amore and Cass are so over that them not winning the tag team championships seems like one of those decisions NXT may regret at this point.

Amore and Cass need to be on the main roster, and even with the Dudley Boyz returning and The New Day reinvigorating the WWE World Tag Team Championships, the entire tag team division is in shambles right now. There are no rivalries that matter, and there’s only one match per show involving a tag team feud, unless you count the six-man and eight-man tags that are completely thrown together and annoying since we see them week after week after week.

But I digress. Amore and Cass came close to becoming the new champions, but Dash and Dawson would retain the titles after hitting the Shatter Machine on Amore.

Your winners and NEW NXT Tag Team Champions: The Revival

This match was born out of heat between Charlotte and Natalya from earlier in the day.

Natalya put up a great fight in Canada and was teased winning the Divas title by locking the Sharpshooter on Charlotte and even kicking out of Charlotte’s Natural Selection. It was a great way to build her and hopefully, she can be a part of this Divas revolution with Charlotte, Sasha Banks, Becky Lynch, Paige [wherever she is] and many others.

The end of the match was the worst part of it, as Charlotte grabbed her father’s hands to try and break the Sharpshooter, but Ric Flair never grabbed her hands to pull her to or under the ropes. Natalya had to improvise and go after Flair, who got on the apron, swung and apparently missed, and was promptly rolled up by Charlotte who gained leverage for the pin by putting her feet on the bottom rope in the most awkward pin ever. Okay, maybe not ever. But it was still bad.

Bray Wyatt cut a promo before the match saying that both he and Luke Harper would slay the Beast. But what he didn’t mention is that he wouldn’t participate in the match at all, effectively making me call out WWE for false advertising the Lesnar/Wyatt match. But the fact of the matter is that nobody cares because everyone knew Lesnar wasn’t losing.

Though, it might be for the best. Wyatt told me last week he didn’t know what he had in store for WrestleMania just yet and that he was disappointed his match against Lesnar wasn’t on the grandest stage of them all. Is there a chance it will be now? Will Wyatt somehow get involved in the Lesnar/Ambrose storyline now? Stay tuned.

Lesnar suplexed Harper about 1,248 times before hitting him with the F5 for the win. Regardless of how that sounds, Harper looked pretty legitimate in there against Lesnar and this might be the launching point of the next phase of his career. He could be doing so much more than he is right now, no offense to Wyatt.

WWE gave the Canadian crowd a nice surprise as they booked fellow Canadian, Sami Zayn, on the card. He faced Stardust in a match that went a lot longer than I anticipated it would go, but at least the right guy won in the end.

Though, why wouldn’t they just put Zayn against Jericho earlier in the night than Swagger? The whole USA/Canada thing would have made for some great storyline telling on this night. But, alas, it seems like nobody in WWE creative cares about that.

Zayn would strike Stardust with the Helluva Kick and pin him for the win.

With both Triple H and Ambrose needing to look strong heading into their respective matches at WrestleMania, this match brought some intrigue, although there was no way I expected Ambrose to win outright and claim the WWE World Title.

Triple H was introduced first, which was interesting to say the least. Generally, champions are introduced last. WWE has used the champion’s entrance first more than they used to, but I was surprised to see the champion enter before Ambrose.

There was some good wrestling here, as Ambrose worked on Triple H’s knee and Triple H worked on the core of Ambrose. The turning point in the match was when Ambrose hit Dirty Deeds on Triple H, but the way he pinned him made his foot – according to the referee – clear under the bottom rope, which deems a pin illegal at that point. Conveniently, the ref noticed it at the 2.9 second mark of the pin, and with Triple H not kicking out, everyone in the building thought Ambrose just became the WWE World Heavyweight Champion. Now that’s how you book a near fall.

A bit later on in the match, Ambrose hit an elbow from the top rope onto Triple H outside of the ring, and then placed him onto the announced table. He jumped back in the ring to break the ten count from the referee, a highly underrated spot in pro wrestling matches nowadays, and then climbed the barricade and leaped onto an empty table as Triple H moved out of the way and was able to get back in the ring.

Ambrose made it back in the ring at 9.9 seconds, but ran right into a pedigree from Triple H, and the champion would retain his title in a really good main event.

I was wondering how they would book Ambrose in this match, and he comes out of it looking strong, which is pretty much what I expected. Heading into WrestleMania against the Beast, Ambrose needed some credibility in a loss, and that’s exactly what this was.

As for Triple H, he needed a win heading into his match against Roman Reigns in the main event at WrestleMania. He made Ambrose look good while soundly defeating him, making Reigns’ challenge against him look even tougher in the eyes of the fans.

Will we see Reigns return to television this Monday night? After two weeks of being absent due to the heinous attack by Triple H, Reigns needs to get back on television to build to his match against the champion at WrestleMania. We’re three weeks away from the biggest moment in his life. If he doesn’t show up on Raw, that’d be a major mistake.

There was a lot of good stuff on this show, especially The New Day, Enzo and Cass, Chris Jericho’s scathing promo and the main event. It built pretty well towards WrestleMania. We’ll see how Raw can do the same on Monday night.