WWE Raw Roundup: The Road to WrestleMania ends in a tug of war 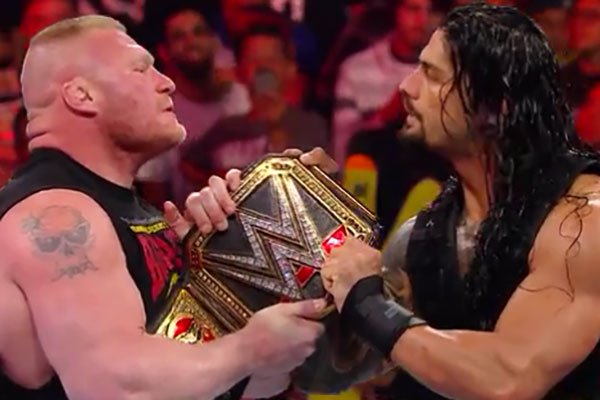 The Road to WrestleMania’s final stop was in Los Angeles at the Staples Center for Raw on Monday night. With SmackDown this week being a heavy recap show, Raw was the final program to further storylines heading into WWE’s Super Bowl this Sunday, and it did just that. We have big matches set for not only the pay-per-view, but also the WrestleMania kickoff show, where the WWE Tag Team Championship will be up for grabs.

We won’t have a SmackDown Rundown for you on Friday morning, but we’ll have a special column giving all of my predictions and thoughts on WrestleMania 31. I’ll also be on SportsRadio 94WIP on Thursday night at 8pm with Brian Haddad to talk about WrestleMania. Be sure to tune in and listen!

The program opened with an iconic moment as Sting made an appearance to kick off Monday Night Raw for the first time ever. Of course, he was interrupted by Stephanie McMahon, and minutes later, Triple H.

Sting made sure that everyone knew that he wasn’t there to fight for WCW; even intimating that such a cause would be ridiculous. He simply wants to tear down Triple H. Fair enough. While the stars looked like they would physically get into it with each other, with Sting wielding his bat and Triple H wielding his sledgehammer, the two didn’t touch.

That’s old school pro wrestling booking that builds more and more anticipation before a huge match. While both men have gotten physical with each other leading up to their match at WrestleMania, it was a good visual to not see them touch each other before their encounter on Sunday.

On the other hand, WWE World Heavyweight Champion Brock Lesnar and Roman Reigns absolutely needed some physical contact heading into their clash in the WrestleMania main event for the WWE World Heavyweight Championship. One would have assumed that since we hadn't seen them physically involved at all that we would have seen some fireworks Monday night.

Instead, we saw a tug of war with the WWE World Heavyweight title belt. Literally, we saw a tug of war. I’m not sure why WWE creative came up with that idea, but it’s probably one of the worst ones I’ve ever seen play out on television. It’s clear WWE didn’t want any physical contact between the two heading into their encounter at WrestleMania, much like Sting and Triple H, but that was the wrong move for Monday night.

This build has been among the most abysmal I’ve ever seen for such a big event and big match that I’m actually of the belief that Vince McMahon may actually just be getting too old for this.

While Sting and Triple H have already had physical contact, Lesnar and Reigns have not. This is the ultimate opportunity for WWE to add pay-per-view and network buys, and they did almost nothing with it. A tug of war with a championship belt isn’t going to make people want to tune in to see the WrestleMania main event.

If anything, it probably turned a lot of people off of WrestleMania entirely. I was inundated on Twitter last night with tweets and messages saying that segment completely dropped the ball and that they might not even watch WrestleMania.

While I ultimately think that’s an overreaction, there’s no overreaction to realizing how bad the build has been for this so-called “mega push” for Reigns. Paul Heyman is a genius with a microphone, but even he couldn’t save the segment Monday night. This build has been among the most abysmal I’ve ever seen for such a big event and big match that I’m actually of the belief that Vince McMahon may actually just be getting too old for this.

It’ll take a miracle for Sunday’s main event to even turn out good. Here’s hoping there’s a miracle left.

"At @WrestleMania, #Undertaker ... you can finally REST IN PEACE!" - @WWEBrayWyatt #RAW pic.twitter.com/Sa8AnmYP7e

Bray Wyatt gave perhaps his greatest promo in his career thus far on Monday night, and has single-handedly built a match with The Undertaker at WrestleMania from scratch. I’m not sure you’ll find anybody else that can do what Wyatt has been able to do the last couple months in building this into a hugely anticipated match at WrestleMania.

United States Champion Rusev destroyed John Cena before their match, which Booking 101 says Cena will avenge himself at WrestleMania and defeat Rusev. I’m not so sure that’ll happen.

Rusev made a resounding statement Monday night and completely destroyed Cena after he ran out after his match and the two brawled. WWE has made Cena look incredibly vulnerable against Rusev – the one superstar who they’ve allowed to dominate Cena. I’m not so sure Cena will get his win back on Sunday, and I don’t think he should. Rusev has been an absolute monster superstar over the last year, and there’s no reason to stop his momentum

The Intercontinental Championship Ladder Match is set to steal the show Sunday night, and I have no doubts that it will. With the likes of Daniel Bryan, Dolph Ziggler, Luke Harper, Dean Ambrose and Stardust, there’s plenty of talent in this match to quite possibly make it a Match of the Year candidate already.

This could be the new WWE tag team champions HulkaSnoopMania brother. HH pic.twitter.com/j4f4KiSlEK

Hulk Hogan made a surprise appearance, during a segment with Snoop Dogg no less. Hogan and Dogg rid the ring of Curtis Axel and then posed for the audience.

If you have the WWE Network, you can watch the entire 2015 Hall of Fame ceremony on Saturday night at 8pm.

ESPN’s Bill Simmons was in the broadcast booth during the 10-Man Tag Team Match hyping the Andre The Giant Memorial Battle Royal. Jon Gruden also predicted the winner of the battle royal in a special episode of Gruden’s QB Camp. The celebrity factor isn’t in full swing this WrestleMania season, but this was fine for what it was.

Handicap Match: Randy Orton d. Seth Rollins and J & J Security [Jamie Noble and Joey Mercury] by pinfall via RKO to Noble. The fans voted for the match via the WWE app, as Kane and Big Show were the other possible opponents for Orton.

Divas Championship Match: Nikki Bella (c) d. Paige by pinfall via the Rack Attack. A.J. Lee, Paige’s WrestleMania partner, accidentally hit her with an elbow outside the ring before Nikki capitalized. Paige and A.J. then brawled after the match.

Non-Title Match: United States Champion Rusev d. Jack Swagger by submission via The Accolade. John Cena ran in after the match and he and Rusev brawled.

Dolph Ziggler d. Daniel Bryan by pinfall via the Zig Zag. Dean Ambrose was the special guest referee, as voted on by the fans on the WWE app. Ambrose gave the Dirty Deeds to Ziggler after the match. All seven superstars for WrestleMania’s Intercontinental Championship Ladder Match hit the ring and a huge brawl ensued.