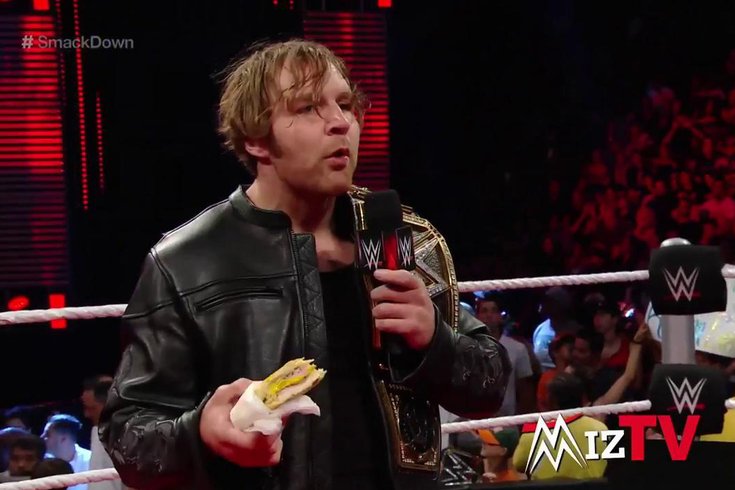 The last day of June brought us SmackDown at the AmericanAirlines Arena in Miami. This edition of SmackDown could have been subtitled “Championship Edition” because there was quite a bit of focus on championships Thursday night. Only one title was on the line, but three champions were in action on a fun program.

With only three weeks left until SmackDown goes live on Tuesdays, it’s been a much better program as of late. Sure, not many storyline-progressing angles happen on the show, but it’s still an entertaining WWE program and rarely has those “Ugh!” moments we often see on Raw every Monday night. There aren’t many, if any, on SmackDown. And that’s the beauty of following this television program.

Rusev vs. who for the United States Championship?

Interestingly enough, SmackDown began with pre-taped promos from four superstars who were about to compete in a Fatal Four Way match to determine the number one contender to Rusev’s United States Championship. Cesaro, Apollo Crews, Sheamus and Alberto Del Rio all were determined to become Rusev’s opponent and the old school feel to the promos to begin the show was very nostalgic.

As for the match, it was a good television match and a different way to start off WWE programming. We’ve been so used to someone coming out to the ring and conducting a promo and somebody interrupting them for so long, that I forgot how nice it was for the show to just begin with a match.

Sheamus and Del Rio, former friends and now foes, worked together a bit before turning on each other. Sheamus and Crews just kind of disappeared at the end of the match after Cesaro countered Del Rio with a Big Swing and then the Sharpshooter to get the win.

After the match, Del Rio attacked Cesaro and shoved him into the steel ring steps outside the ring before leaving. Following that, the United States Champion came down as Cesaro was laying injured on the outside of the ring and challenged him then and there instead of later in the night.

After a commercial break, the Swiss Superman obliged Rusev’s request and despite selling his rib injury courtesy of Del Rio, gave Rusev a competitive match. With how WWE has built Rusev back up into a legitimate contender, it was good to see Cesaro get as much offense in the match while selling a rib injury.

Backstage, Renee Young informed Rusev he’d be defending his United States Championship on the July 4th edition of Raw coming up this Monday against Titus O’Neil.

Miz TV returned to SmackDown as the current Intercontinental Champion, The Miz, and his wife, Maryse, welcomed the WWE Champion Dean Ambrose. However, Ambrose made his appearance sooner than anticipated, setting the stage for one of the more entertaining segments of Miz TV in a long time.

Ambrose mentioned Miz’s new movie, “Maroon 5 Battleground,” to which the Intercontinental Champion hastily replied it was, “Marine 5: Battleground.” Ambrose then took out a Cuban sandwich and began eating it in the ring, much to the disgust of Maryse and Miz, who remarked, “Who brings a sandwich to a talk show?”

"Who brings a sandwich to a talk show?" #SmackDown #WWE pic.twitter.com/FuwiDivQF3

Ambrose cited his busy schedule and not having time to eat as to why he was eating then and offered Miz a bite, but he declined because it “wasn’t organic.”

So much brilliance in this segment. I don’t like The Miz as the Intercontinental Champion, but I’ll be damned if he’s not an entertaining character right now. Once Ambrose took Miz’s suit jacket and wiped his mouth with it, all the gloves were off. Maryse grabbed the jacket and threw it on Ambrose’s head and Miz kicked him right in the kisser before leaving the ring. That set up the night’s main event.

We’ve seen plenty of Champion vs. Champion matches over the years, but there were no titles on the line in this one. Ambrose and Miz had a good main event and the WWE Champion got the win after hitting the Intercontinental Champion with Dirty Deeds. That made this Flyers fan in Miami very happy.

I’d like to see more interaction between these two just because they are pretty entertaining together.

The New Day and Bray Wyatt continue the verbal joust

After BraunStrowman and Erick Rowan destroyed two local Miami jobbers, The New Day interrupted their post-match victory celebration with a promo that looked ever so familiar.

Kofi Kingston and Big E had Rowan’s infamous sheep masks, full with rainbow unicorn horns through them. Once again, they were making plenty of jokes at the expense of the Wyatts, except for Xavier Woods. On Raw and on SmackDown, he’s looked like he’s in another world. And whether he eventually “snaps out of it” or this is the beginning of a New Day breakup, he’s doing a good job in making us think.

Wyatt warned them that all they could do is pray and run. Because that’s always helped other guys like John Cena and Roman Reigns who have effectively squashed any heat Wyatt’s had. Now that he’s back with his family, will they have New Day get one over on him, much like Daniel Bryan did two and a half years ago when he joined the Wyatts just to turn on them a few weeks later?

I suggest not making Wyatt look like a fool again. But it may be too late for that.

The Boss sends another message to Charlotte

Summer Rae didn’t get a chance to wrestle on Monday night after her opponent, Becky Lynch, attacked Natalya at the announcing table. However, she walked right into a Sasha Banks promo backstage after Dana Brooke defeated Billie Kay, and the fight was on.

Banks, who’s set her sights on the WWE Women’s Championship that Charlotte has held since last September, submitted Rae in a somewhat competitive match with the Bank Statement. There’s no debating who should be the next WWE Women’s Champion, and she’s The Boss.

• Braun Strowman/Erick Rowan d. Aaron Hill/Mike Duwatti by pinfall after Strowman slammed Duwatti onto Hill and pinned both of them in a squash.