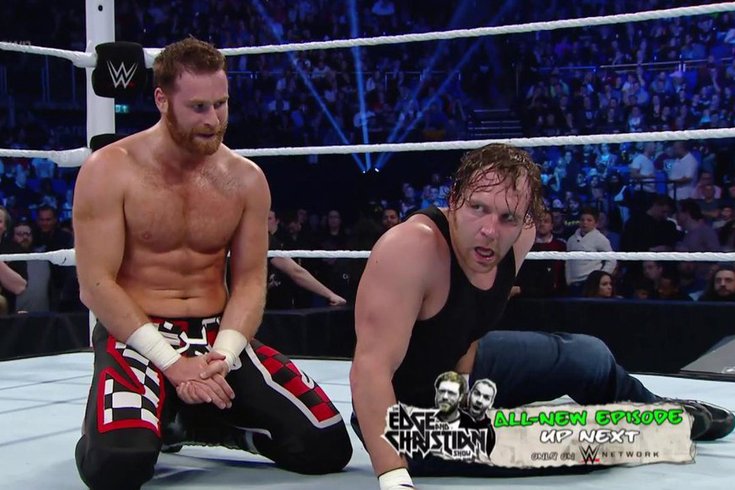 They’re a dream team of sorts, but Dean Ambrose and Sami Zayn couldn’t get the win on Thursday night.

Unfortunately, Thursday got off to a rough start with the news that former WWE superstar, Chyna (aka Joanie Laurer) had passed away. Many former and current WWE employees took to social media to pay their respects to one of the biggest pioneers for women in the wrestling industry. Chyna should be inducted into the WWE Hall of Fame eventually, but it’s heartbreaking to know she won’t be able to see it happen.

With that news fresh on everyone’s minds on Thursday night, SmackDown aired on the USA Network, emanating from the O2 Arena in London once again.

Owens, Jericho get a big win over their rivals

However, it wouldn’t be a happy ending for the UK crowd. Owens and Jericho got the win after Jericho crotched Ambrose on the top rope while he was going for a high-risk maneuver, and Owens took advantage and pinned him. It was an interesting choice for an ending, especially with Ambrose getting pinned over Zayn.

I just know the two matches featuring these guys at Payback will be fantastic.

Miz TV opened the show and featured AJ Styles, who’s been a guest before on the show. Maryse joined her husband once again, and the two played off each other so well like they usually do that it made this segment a lot better than it had any right to be.

The segment pretty much set up a match between Styles and Miz, but not before Miz pestered him about how his friends Luke Gallows and Karl Anderson attacked Roman Reigns and the Usos. Much like he did on Monday night, Styled denied having anything to do with the attacks. Miz kept peppering him, saying, “You didn’t tell them do do it, but did you tell them not to?” in a sort of leading accusation, to which apparently made Maryse all hot and bothered and the two made out. Again. Which they do every show now.

After they were finished, Miz turned his attention back to Styles, but the Phenomenal One met him with a barrage of punches and kicks before leaving the ring. The two would meet in a match later on in the evening.

Miz is underrated in the ring at times, but I’ve just found him boring ever since his storyline with Damien Sandow was finished. Now, he’s getting more and more entertaining with Maryse on board. That couldn’t help him get a win on Thursday night, though.

That’s because Gallows and Anderson made their presence felt again, preventing Miz from heading backstage during the match. Styles capitalized and got the win with the Phenomenal Forearm. Hmmm…

Speaking of Gallows and Anderson, they announced they’ll make their in-ring debut this Monday on Raw against the Usos.

After the match, Miz confronted Shane McMahon, who didn’t make an appearance on television, in the ring. It was quite entertaining.

Finalists in tag team tournament confront each other

Enzo Amore and Colin Cassady and The Vaudevillains had a promo battle ahead of their match at Payback to determine the No. 1 contenders for New Day’s WWE World Tag Team Championships. At first, I thought one of these teams should win the titles, but now I’m not so sure.

That’s not to say neither team can carry the titles with prestige, but New Day is still so hot right now that taking the titles off them might be a counterproductive move at this point. It’s awesome that so many new tag teams have been making their way to the main roster, but it’s absolutely not time yet for New Day to rid themselves of the titles.

Amore and Cass and The Vaudevillains will be a great match, especially since both teams have so much knowledge of each other due to their time in NXT. I’m just wondering if they’ll cut these teams off at the knees because of the success of The New Day, or if they’ll decide the trio is so over that they don’t need the tag team titles, and drop them to one of these new teams.

I wouldn’t really mind if that’s the direction WWE goes, but it’s so hard to tell sometimes.

Paige gets a big win in home country

Natalya and Paige teamed together to defeat Naomi and Tamina in tag team action. Paige got a huge positive reaction as she’s from Norwich which isn’t too far from London. She technically got the win for her team as she made Naomi submit to the PTO.

Ryback and Kalisto met in a rematch from WrestleMania, only Kalisto’s United States Championship wasn’t on the line. Ah, did you forget about the U.S. Title? I sure did. Ryback got the win, most likely because it was a non-title match. But why are these guys still wrestling each other? Is Ryback going to eventually get the championship? If so, why? I mean, sure, it’s not like Kalisto defends the championship like John Cena used to do, but still. The secondary titles need credibility and neither of them has that right now.

Also, the Intercontinental Champion and the United States Champion were both pinned on the same show in non-title matches Thursday night. Way to build up your champions, WWE.

• Baron Corbin vs. Dolph Ziggler never started as Corbin attacked Ziggler before the match and hit him with the End of Days outside of the ring.

• Non-Title: AJ Styles d. The Miz (c-IC) by pinfall via the Phenomenal Forearm. Gallows and Anderson came out to prevent Miz from leaving, allowing Styles to get the win.

• Natalya/Paige d. Naomi/Tamina by submission after Paige got Naomi to submit to the PTO. Natalya hooked Tamina in the Sharpshooter at the same time.

• R-Truth d. Fandango by pinfall via his What’s Up finisher. Mauro Ranallo called it the Flatliner, so who knows what it’s called anymore? Goldust was the special guest referee.

• Chris Jericho/Kevin Owens d. Dean Ambrose/Sami Zayn by pinfall when Owens pinned Ambrose after Jericho crotched him on the top rope while Ambrose was going for a high-risk maneuver.