WWE SmackDown rundown: Reigns and Ambrose set their sights on the championship 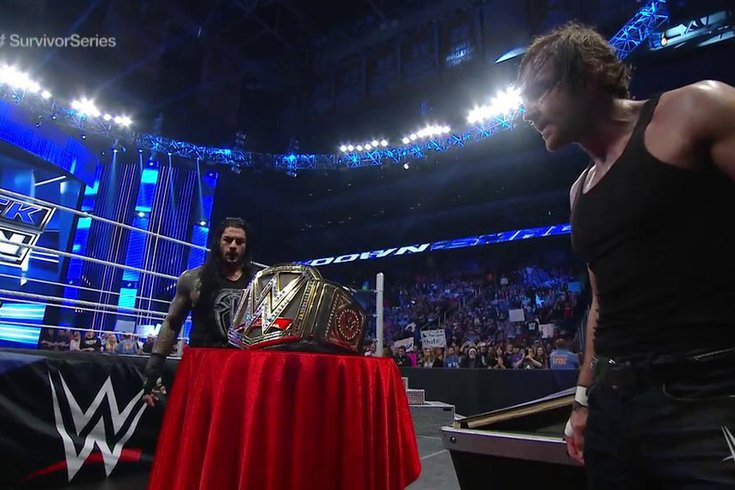 Best friends Roman Reigns and Dean Ambrose may find themselves squaring off with each other for the WWE World Heavyweight Championship at Survivor Series on Sunday.

Off the heels of one of the most controversial angles ever on WWE television, the crew was in Knoxville, TN at the Thompson Boling Arena for WWE SmackDown on Thursday night. Charlotte and Paige were both in the arena – did their paths cross? Also, the Final Four for the WWE World Heavyweight Championship tournament were in the main event in a tag team affair. What team came out on top? Did the Brothers of Destruction get any revenge on the Wyatt Family from Monday’s Raw?

Miz TV was the centerpiece of the program as we head to Sunday night. The Final Four of the WWE World Heavyweight Championship tournament took part in the opening segment, and who really was surprised by that? Kevin Owens, Alberto Del Rio, Dean Ambrose and Roman Reigns all made their way to the ring

It was your generic pre-PPV promo between adversaries, except when a special guest showed up.

R-Truth, who apparently thought he was part of the tournament and had a chance to win the title on Sunday night, interrupted and made sure we knew he would walk away from the Survivor Series as WWE World Heavyweight Champion. Interesting. This isn’t the first time R-Truth has had a comedy segment like this, as he did the same thing during the Money in the Bank promo earlier this year when he was not even involved in the match.

Later on in the night, before the main event of Reigns and Ambrose teaming up to take on Owens and Del Rio, the former Shield members had a chat backstage saying if their paths cross, it’ll just be business as usual. This is clearly foreshadowing to one of these guys turning heel and joining The Authority, right!? I mean, it would make the most sense, and would be a great angle since it’ll be one major face switching sides. Rollins was the last to do so. This could be big. I can’t wait.

The good guys got the win and had a little staredown with the championship as SmackDown left the air.

Bray Wyatt and Braun Strowman gave strong promos on Thursday night, leading me to think they’ll be the two representing the Wyatt Family on Sunday night against the Brothers of Destruction. There was nothing really new revealed by way of their promos, but The Undertaker and Kane decided to play some mind games with the master of mind games, and used Wyatt’s own druids against him, the opposite of what happened on Monday night.

I used to think this would be a great match. I still think this will be a good match, I’m just not sure I care about the story anymore. And, in wrestling, and sports entertainment, the story needs to be good. We’ll see if something big happens on Sunday to make this entire storyline worthwhile, because right now, I’m completely underwhelmed.

Charlotte was in action right after the controversial angle involving her and Paige on Raw, taking on Brie Bella in a non-title match. I thought it would be interesting to see how she reacts in the ring with her first match since that angle, but it didn’t look like it affected her doing her job at all. In fact, WWE replayed the angle, without edits, before the match began. They’re really going to ride this angle as long as they can, and I can’t blame them. Charlotte got some loud cheers from the audience, if you ignore the fact that WWE could have piped in cheers from the speakers.

"When it comes to winning back my championship, there is NO line I won't cross!" - @RealPaigeWWE #SmackDown pic.twitter.com/Sofi2y7GNn

Paige did have a promo after Charlotte’s match, saying the champion was immature and champions don’t let words get under their skin. Paige said a true champion crosses the line and she’ll do whatever it takes to win back her championship. Move over Owens, we may have the best heel in the business right now in the Divas division.

Why is The New Day not in action at Survivor Series? A traditional 5-on-5 elimination match was announced by WWE.com earlier this week, but no participants have been announced yet. I could see the trio being in the match with two more partners, going against the likes of The Usos, The Dudleyz and Ryback, or something like that.

• Cesaro d. The Miz by submission via a crossface.

• Neville and the Dudley Boyz d. Stardust and The Ascension by pinfall via the 3D on Viktor.

• Tyler Breeze d. Zack Ryder by pinfall via the Killswitch.

• Big E d. Kalisto by pinfall via a running splash. Ryback came out after the match to make the save.