Yes, the Eagles are already paying Sam Bradford and Chase Daniel a lot. So what? 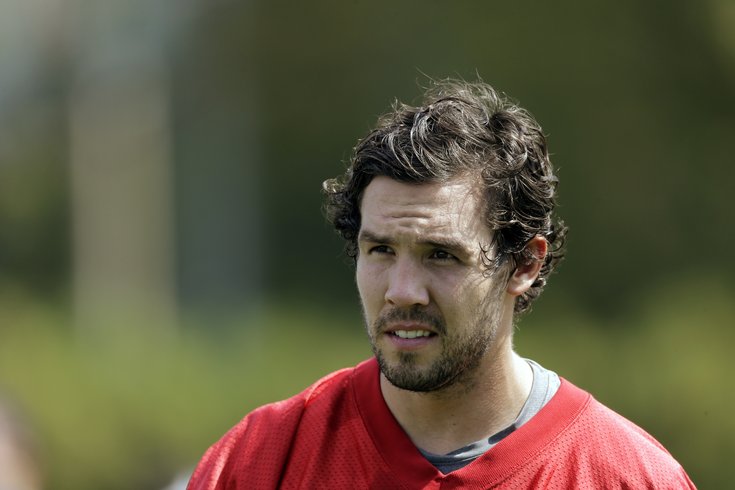 Sam Bradford has collected over $473 billion dollars over his six-year NFL career.

As we know, back in March the Eagles signed Sam Bradford to a two-year deal worth $36 million, $22 million of which is guaranteed. That deal puts Bradford among the top half of starting quarterbacks in the NFL, earnings-wise, even though he has never been close to the top half of the league's performers at his position.

Soon after in free agency, the Eagles then went out and signed the Chiefs' Chase Daniel to a lucrative deal. His deal is a three-year contract worth $21 million ($12 million guaranteed). That number can escalate to $36 million in incentives based on playing time, wins, and playoff appearances, although he would need to be the starting quarterback to reach those incentives.

That is a lot of money to allocate to a pair of quarterbacks with 13 combined years in the league and 26 combined career wins.

After the Eagles draft either Carson Wentz or Jared Goff in the 2016 NFL Draft, their new rookie quarterback will count for just under $5 million against the 2016 salary cap. That will move the Eagles up to somewhere around seventh in total salary cap allocated to the quarterback position in the NFL in 2016.

With the Eagles paying their current quarterbacks as much as they already are, why on Earth would they trade up to the No. 2 overall pick to draft (and pay) yet another quarterback?

The answer – After seeing how the Eagles' offseason has played out, the allocation of dollars to the three quarterbacks on the roster makes perfect sense. Let's review them one-by-one:

As noted above, Bradford signed a two-year deal, but it functions a lot more like a one-year deal because all of his guaranteed money will have been paid in the first year of his contract. It is the type of contract that showed at the time that the Eagles did not think of Bradford as their long-term solution at quarterback. That was later confirmed when the Eagles traded up to the No. 2 overall pick, where they hope they'll find that long-term answer.

The Eagles were able to achieve a shorter, less risky deal long-term by paying him a figure higher than many of his more successful peers. That was the trade-off for being able to escape his contract with manageable pain after one year, and no pain after two.

Bradford gives the Eagles the best chance to stay competitive in a weak NFC East, in 2016.

Next offseason, assuming Wentz/Goff has progressed to an acceptable level, the Eagles can move on from Bradford, with the newbie taking over as the starter. Barring another Bradford ACL tear or similar catastrophe, the Eagles will likely be able to trade him for a draft pick commensurate with his level of performance in 2016.

If they are able to do so, Bradford will count for just $5.5 million in dead money against the 2017 cap.

Daniel's contract will pay him $7 million per season over the next three years. That is a pricey figure for a backup, however, that is the unfortunate cost of signing free agents on the open market. In Daniel, the Eagles have their long-term answer at the No. 2 quarterback spot. If the Eagles want to let Wentz/Goff sit for a year, Daniel will likely serve as the backup for Bradford in 2016, and then for the newbie in 2017.

Since the completion of the last collective bargaining agreement, the NFL now has a rookie salary pool, in which contract numbers are essentially predetermined. No matter who the Eagles select at pick No. 2, whether that be Carson Wentz, Jared Goff, or a punter, that player's cap number will look like this over the next four years, as estimated by overthecap.com:

That is a far cry from the days of outlandish rookie quarterback contracts, Bradford, for example, signed a six-year deal worth $76 million in 2010.

Assuming the Eagles are indeed able to trade Bradford next offseason, here is how the quarterback cap numbers will look over the next three years:

Yes, the cost of the Eagles' quarterbacks will be in the top 10 among NFL teams in 2016, but it will be closer to the middle of the road in 2017 if the Eagles can deal Bradford, and then among the league's lower numbers in 2018.

Wentz/Goff will ideally be the starting quarterback in 2017 and beyond, Daniel will be slated as the long-term No. 2, and Bradford the guy who can maintain short-term competence, albeit at a high cost.

After seeing how the Eagles' offseason has played out, the allocation of dollars to the three quarterbacks on the roster makes perfectly reasonable sense.