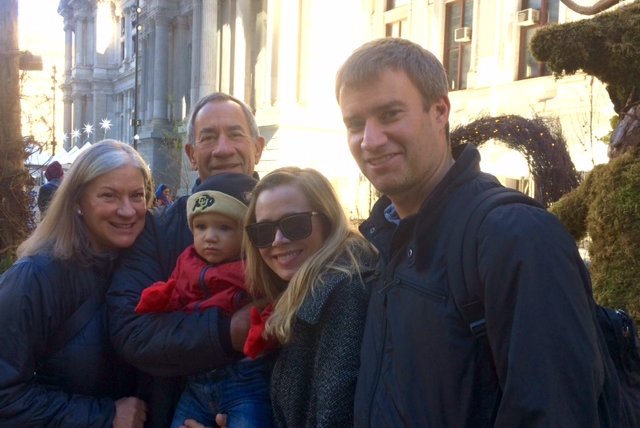 The Dorr family - former Philadelphians in from California -- found the Garden Maze on Dilworth Park a great diversion Saturday. The pop-up garden remains until Feb 24.

For Annamarie Wilson, the newest installation on Dilworth Plaza in front of City Hall in Philadelphia really is a-maze-ing.

“Her mind is blown by it all,” explained her dad, Danny Wilson, who watched the mini-maze going up over the past few days and knew he’d be visiting with his family from their home in South Philly.

Wilson watched as Annamarie went rocketing off through the America's Garden Capital Maze on it first Saturday in operation.

“She doesn’t get that it is all so short that she can just step over it,” said Wilson as Annamarie sprinted back to take yet another cellphone photo with her father.

“She likes it for the photos. She’s been shouting ‘Happy face!’ and ‘Sad face!’” he explained as they grinned for the camera. 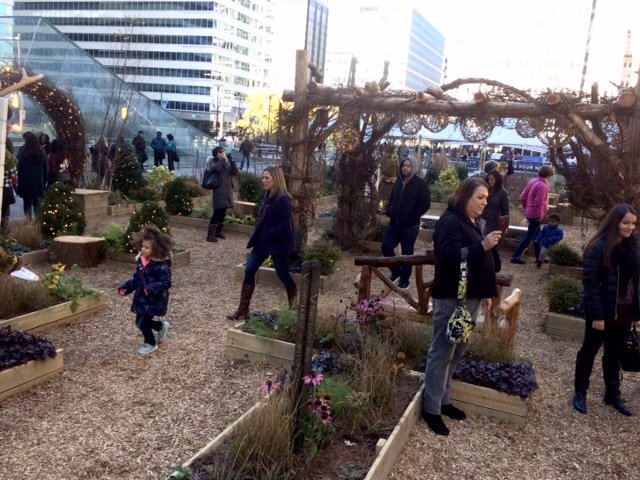 While touted as a maze, the new installation is more of a winter garden then a true maze.

The garden maze was constructed by Groundswell Design Group, the organization behind the hugely successful Spruce Street Harbor Park and Independence Beer Garden.

It is meant to showcase all 32 public gardens, arboreta and historic landscapes located within 30 miles of Philadelphia by displaying topiaries from each.

The maze, open through Feb. 26, features twinkling lights, archways made from branches and other seasonal plants.

The maze, which also serves as a pop-up winter garden, ends at a decorated gazebo, where Mike Grant, Philly’s ubiquitous Philly Jesus, planted himself for a time on Saturday.

While Wilson only planned to spend an hour or so at the maze, he’ll be back soon for ice skating, which is also already open, and for the Christmas Village, which will be on the North Apron and the courtyard of City Hall, moved from Love Park due to construction. 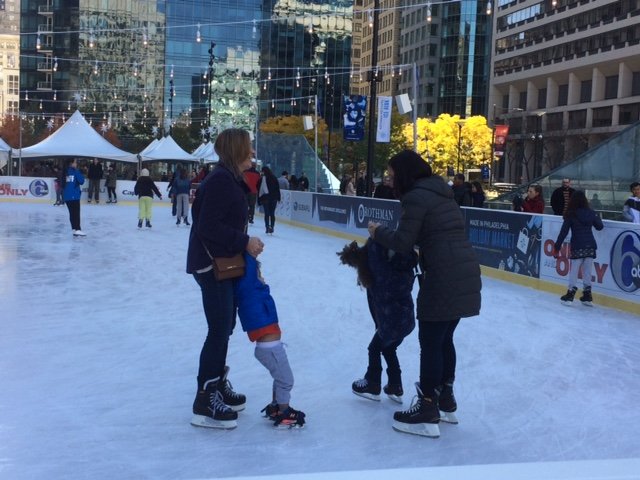 The ice rink at Dilworth Plaza is also open.

The market will open daily from Thanksgiving to Christmas Eve, with a special preview weekend Nov. 19-20.

Wilson said he’s tried in the past few years to shop exclusively at the market for Christmas because it features local goods.

University of Pennsylvania students Lokesh Shah of Cherry Hill, Sophia Ly of Arkansas and Caroline Wong, fundraising for a medical charity in Tanzania, decided the maze was a strong draw, so they set up shop nearby.

Wong said she’s heard from other students that the skating was a blast and she hoped to come back.

The Dorr family – Sid, Merv, Courtney, Ethan and 20-month-old Colton – saw the maze from their hotel room window at the Ritz-Carlton, which is just across the street.

Enjoying their serendipitous find, the Californians who are former Philadelphians plunged through the maze, a warm-up for their plans to take in the Eagles game on Sunday.