Here's how 30 minutes of cycling can boost your health 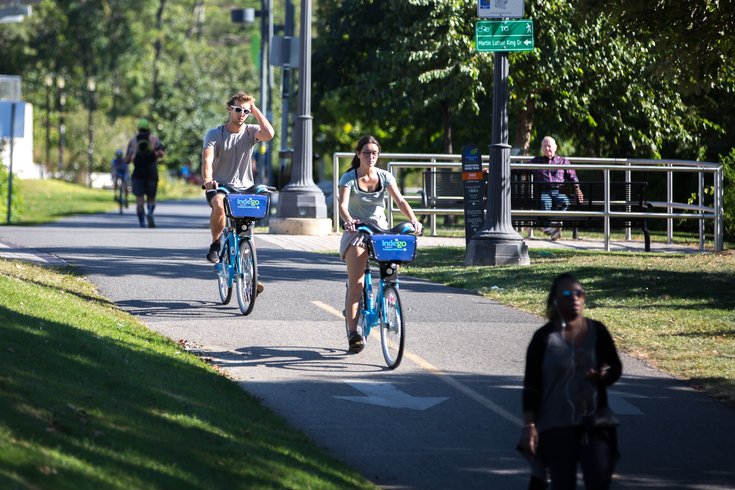 Cyclists use Indego bikeshare bikes on the Schuylkill River Trail.

Cycling is simple to integrate into your daily lifestyle. Easy on the environment, family-friendly, and a perfect means of daily exercise — it’s a popular activity for a reason. However, there are additional benefits from cycling that you probably don’t know about and they’re backed by science. Biking is proven to boost brainpower, leading you and your family to a long, healthy life together.

A study from 2015 found that regular biking increases white matter in the brain. White matter connects different regions of gray matter within the cerebrum to one another — the more white matter, the faster connections and information can travel throughout the brain. Bigger, more connected brain matter bodes for a longer, better life.

Cycling regularly can improve memory and problem-solving skills by up to 20 percent both in the short term and the long term. A recent study in the Journal of Clinical and Diagnostic Research found that individuals scored higher on tests measuring memory, reasoning and planning after spinning on a stationary bike for 30 minutes. If scores improved after just one session, imagine the possibilities after a lifetime of cycling. Evidence largely suggests that cycling benefits your ability to retain information and lead a more efficient lifestyle.

Benefits for young and old

An improved increase in brain function is beneficial for both the elderly seeking to combat memory loss and children looking to improve school performance.

For those entering old age, cycling can protect against an aging brain. Arthur Kramer, a neuroscientist at the University of Illinois at Urbana-Champaign, astoundingly found that after only three months of exercise, volunteers between the ages of 60 and 79 had the brain volume of those three years younger.

Similarly, more kids than ever before are commonly diagnosed with ADHD. Cycling has been commonly linked to abating ADHD, which is particularly hopeful for families seeking to avoid medication. Many pro cyclists agree that “at pro races and masters’ events it’s not uncommon to hear jokes about cyclists ADHD-like characteristics.” John Ratey, a professor at Harvard Medical School has treated and studied ADHD for more than 20 years and imparts that, “a bout of exercise is like taking a little bit of Prozac and a little bit of Ritalin.” Regular exercise raises the baseline levels of norepinephrine and dopamine which both Ritalin and Adderall target.

Along with increasing norepinephrine and dopamine, biking also helps with mental health and beating the blues. James Blumenthal, professor of behavioral medicine at Duke University, imparts that “exercise works as well as psychotherapy and antidepressants in the treatment of depression.” Similarly, biking helps guide a calmer, relaxed lifestyle and can help lower stress levels by limiting adrenaline and cortisol levels.

Some even refer to biking as fertilizer for the brain. A recent study that tested volunteers with Type 2 diabetes or metabolic syndrome found that after three months of regular exercise on a stationary bike, their BDNF (brain-derived neurotrophic factor) levels were higher. BDNF is integral to maintaining and creating neurons and can diminish the risk of neurological diseases like Alzheimer’s and Parkinson’s.

Whether you hit the gym or the open road, just 30 minutes of cycling a day can offer untold benefits to your health. Enjoyable, convenient, and easy to do — take your whole family on one of the many traffic-free bike routes around Philadelphia. The benefits are all encompassing and encourage long-lasting habits to foster ultimate brain health. Just be sure to always wear a helmet!

Next time you’re in Philadelphia, hop on Indego, Philly’s bike share program that makes biking simple and convenient. Independence Blue Cross is proud to sponsor Indego and put better health at your fingertips like never before.