Ten N.J. attractions Chris Christie should visit now that his presidential quest is over

With his presidential ambitions destroyed, here are a few places the Gov. can check out now that he's home for good

Save for four years “studying” at the University of Delaware and 15 months working at the Florence (S.C.) Morning News, I lived in New Jersey for the first 27 years of my life (don’t @ me with Jersey jokes; heard ‘em all before). Which is to say that I have a pretty good feel for what the Garden State has to offer.

Though my time there did not overlap with Chris Christie’s governorship, today is the perfect day to share suggestions for places he could now visit since he’s (all but assuredly) returning “home” from the presidential campaign trail in perpetuity.

He couldn’t have seen Donald Trump coming along and seizing the loud-mouth mantle from him, even if the “real estate mogul” left behind a trail of four bankruptcy-protection filings in the southeastern part of his state.

Christie’s probably bummed about that, among many things today, so here are 10 places he could visit to take his mind off his failed campaign to lead a nation.

Think of it as a chance to retroactively embrace the state that elected him to office in the first place!

1. Atlantic City Boardwalk (near the Atlantic Ocean, at the end of the Atlantic City Expressway): Listen, I’m sure you don’t want to be reminded about that dude who’s currently leading the Republican primary field and all, and that dust-up on the Seaside Heights jawn probably lingers as a tense moment ...

... but the views of expansive south-facing beaches in A.C. can be breathtaking. (If you go outside of the casinos that remain open!) Might I suggest strolling down to the Irish Pub (164 St. James Place, 08404) to take advantage of their Poor Richard Special ($4 for a soup and sandwich at lunch) or $9 for Daily Blackboard dinners. The place is so charming it makes me miss working down there!

2. Liberty Science Center (Liberty State Park, 222 Jersey City Boulevard, Jersey City, 07305): Yeah, yeah, I know you’ve had some contentious run-ins with teachers’ unions and all. Starting Friday, though, this really cool spot will feature a four-day “Science, Sabers and Star Wars” educational event. Dress as your favorite character – mine remains Boba Fett; who’s yours?! – and you’ll get a $5 discount! May the force be with you, Chris.

3. High Point State Park (1480 Route 23, Sussex, 07461): You know what always breaks me out of low-point doldrums? The breathtaking scenery that only nature can provide. And check this out: The view from 1,803 feet above sea level “is a spectacular panorama of rich farmland and forest, soft hills and lush valleys in three states.” I’m sure you need to take a deep breath and unwind after these frantic past few months of travel and glad-handing. It’s only $5 for residents on weekdays and $10 on weekends. Don’t worry: Though people were complaining about your absence, you still qualify for those perks. I think. You might want to check into that. 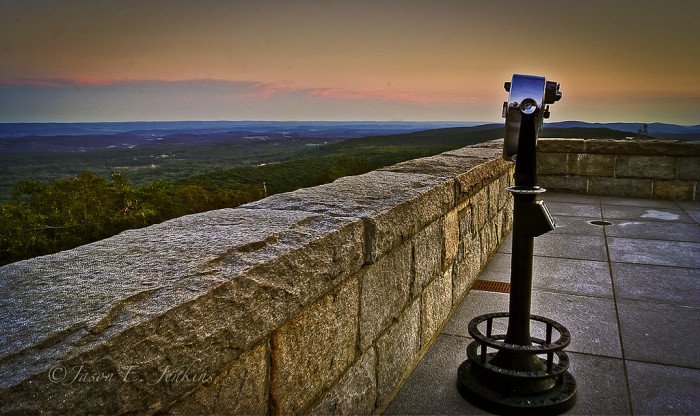 The view from High Point Monument.

4. Battleship New Jersey Museum and Memorial (62 Battleship Place, 08103): I know you’ve paid close attention to Camden during your time in New Jersey office. I also know you’re acutely aware of the Battleship New Jersey’s existence on its waterfront. But did you know you could “Live Like a Sailor” – stow your gear in a locker, sleep in a bunk, “chow down” in the mess hall and buy a personalized “Dog Tag” – during an overnight encampment aboard the ship that was commissioned for service in World War II, Korea and Vietnam? It’s a pretty good way to honor the troops who served aboard that vessel and you re-acclimate to somewhat-civilian life!

5. Perks Place, Franco’s Place, McMillan’s Bakery (237, 53 and 15 Haddon Ave., 08108, respectively) and Tom Fischer’s Tavern (18 W. Cuthbert Boulevard): You probably haven’t heard of these places but – hoo boy – you don’t know what you’re missing. Having grown up in the Westmont section of Haddon Township 08108 (Go Hawks!!!!), this is the holy trinity of haircuts, panzarottis and cream donuts. Let’s start with the grooming: Billy Harner is the proprietor of Perks Place. You may remember him as The Human Perkulator, aka the crooner behind the hit song “Sally Sayin’ Something.” Check it out:

Anyway, Perk is a Township legend, and I’m proud to say that he cut my hair for a good long while.

While Franco’s Place has since moved from its red-shack location right next to Perks Place, it’s the place responsible for the life-changing deliciousness that only original panzarottis can provide. Trust me on this. Top it off a couple blocks away at McMillan’s with the best cream donut in the world. If you still have time visiting Twp., stop by Tom Fischer’s Tavern around the corner on Cuthbert. It’s, simply put, the best place around. Drop my name; I'll make sure they know you can have a drink on me.

6. Mysterious Tuckerton Christmas Tree (Great Bay Boulevard, 08087): Here’s a strange nugget that I was steered toward on WeirdNJ.com; perhaps you can help figure out what’s going on with it. After traversing desolate roadways near salt marshes sits “a surprising sight to see in the middle of nowhere: an evergreen shrub standing there in all its verdant beauty, its red, silver, gold and green ornaments gleaming brightly against the backdrop of a steely grey winter sky.” Nobody seems to know who’s behind it. Perhaps you could commit yourself to determining the source of Christmas joy!

7. Freefall Adventures (300 Dahlia Ave., Williamstown, 08094): No, this isn't a snarky slight of how your campaign played out. I’m telling you, Chris, one of the most exhilarating moments in my life was setting foot out of an airplane some 13,500 feet up in the sky over Cross Keys Airport, free-falling for a minute toward earth and then, luckily, activating a parachute for many minutes of head-clearing reflection while drifting toward the ground. The views: Amazing. The rush: Otherworldly. You probably need a little bit of distraction right about now. I can think of no better way to do it. It’s about $200 for the jump but totally splurge $130 for the video package. It’s well worth it. You’ll feel like a new man afterward.

8. The Stone Pony (913 Ocean Ave., Asbury Park, 07712): You’re a big Bruce guy, right? Well, use your gubernatorial sway to find out when he’s planning his next drop-in at the legendary Asbury Park mainstay and prepare to rock ‘n roll, my man. Here’s some backstory that I’m sure a super fan like you already knows (link!) all about.

9. Trenton Punk Rock Flea Market (675 S. Clinton Ave., 08611): You work in Trenton. Well guess what: The Trenton Punk Rock Flea Market returns on April 2 and 3 this year, and that’s totally the place to go for comic books, horror memorabilia, classic video games and more! Yeah, yeah, yeah, that whole “Shop With The Devil” vibe might not have played too well in the Presidential campaign. But guess what: You don’t have to worry about that anymore! Yay!

10. Drumthwacket (354 Stockton St., Princeton, 08540): I know you live at your family pad in Mendham Township, but many of your predecessors called the Governor’s Mansion their home. If you’re into that kind of thing, the elegant Greek Revival and Colonial Georgian architecture will take your breath away! It’s open most Wednesdays for guided tours at 1 p.m., but if you’re planning to bring a group of 20 of more people, you can register for visits 9:45 a.m., 10:45 a.m. and 11:45 a.m. (Oh yeah, there’s an Easter Egg Hunt coming up on March 19, too).

So, there you have it, Governor. As a fellow Blue Hen, I'm sorry things didn't pan out, but maybe these suggestions will help cushion the blow to your campaign, ego and disposition. Chin up, buddy.