100 girls-choir singers to Hillary: Let us sing the anthem on nomination night

Coming from all 50 states, they hope to be on the Wells Fargo Center stage on a politically historic night 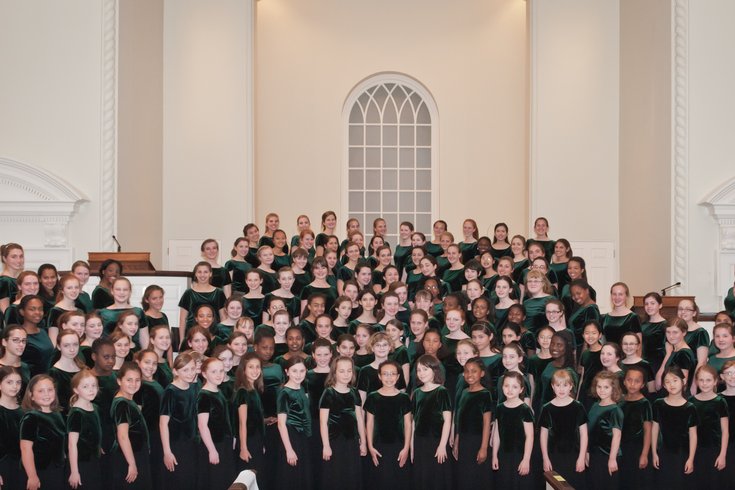 The Pennsylvania Girlchoir will host peers from all 50 states during next week's 'Let Freedom SING!' Girlchoir National Convention. They will perform throughout the city during DNC week and hope to get invited on stage by Hillary Clinton.

They want to sing the National Anthem at the Wells Fargo Center on the night that Hillary Clinton gives her historic nomination-acceptance speech next week, but first comes the tough task of being selected over the likes of Beyonce, Katy Perry and a local boy whose voice wowed Pope Francis.

Next week, 100 choral singers from across the country will bring their talents to the “Let Freedom SING!” Girlchoir National Convention “in an effort to raise a bipartisan voice through song.”

A pair of “singer delegates” were selected from each state. Mostly high-school girls (though a 9-year-old and 86-year-old Holocaust survivor will be among them), they will arrive in town starting Sunday to meet for the first time ever. Then, they'll prepare for the “Let Freedom SING!” concert next Wednesday at Arcadia University.

Throughout the DNC week leading up to that performance, they will put on a collection of “pop up performances” throughout Philadelphia.

To hear Pennsylvania Girlchoir Artistic Director Steven M. Fisher tell it, the ultimate goal of those involved in the event he created is to take the stage on a historic night in American politics.

“I’ve been petitioning the DNC, asking if we can sing the national anthem on Nomination Night. From what I’ve heard, our competition is Beyonce and Katy Perry,” Fisher told PhillyVoice on Thursday. “As awesome as they are, I think we have something to offer that’s more unique: It's what unity sounds like, bringing all 50 states together in a way that only choral music can.

“I would hope that the DNC sees the value of youth and unity that the choir represents. My contacts at the host committee and DNC know it’s going on, and that the girls’ hope is to sing there.”

The gathering itself is not formally associated with DNC events, which will overtake Philadelphia next week, but the timing was intentional.

The singers will rehearse at Arcadia University in Glenside in the mornings, and then travel to the city to perform in a unique “flash mob” variation some afternoons and nights. Already, they’ve been invited to perform at a Tuesday event at the Philadelphia Museum of Art also featuring Ben Folds and Ben Vereen, Fisher said.

"I love singing more than anything, so singing with girls from all 50 states is going to be awesome!" said Niya Whiters, a singer-delegate hailing from West Philadelphia.

Organizers want everybody to know that this is a non-partisan event, even though just one political party’s convention is in town.

“I’d grown tired of the constant partisanship, and thought it would be cool to do any event that brings people together from all 50 states in an effort to inspire others,” he said. “Choral music is the antithesis of politics, which is all individual, or personality driven. It’s not about the soloist; it’s about the group. There will be no discussing politics, because that could end up getting pretty contentious.”

Local organizers reached out to the top girls’ choir in each state, relying upon them to nominate two of their best singers. The girls’ families pay for themselves to get here – ironically, Hawaii and Alaska’s participants were the easiest from which to get commitments – and have the option of staying at a Pennsylvania Girlchoir host home.

In spirit, there’s a close parallel between this gathering, and how 14-year-old Keystone State Boychoir performer Bobby Hill’s vocals stopped Pope Francis in his tracks during his visit last September. (The local choirs fall under the same umbrella.) In fact, Hill’s name is among those in the mix for anthem-duty consideration.

Asked about the girls' mission, a spokesman for the local Clinton campaign office deferred comment to the DNC organizing committees, a call to which wasn't immediately returned. But that won't deter Fisher and the 100 singers.

“Whether it’s with Bobby or Beyonce, we’d be happy to share the limelight, but we would love it to be just the girls on that historic night," Fisher said. "We’re absolutely confident that if word of this trickles up to the nominee, she’ll think it’s a no-brainer.”