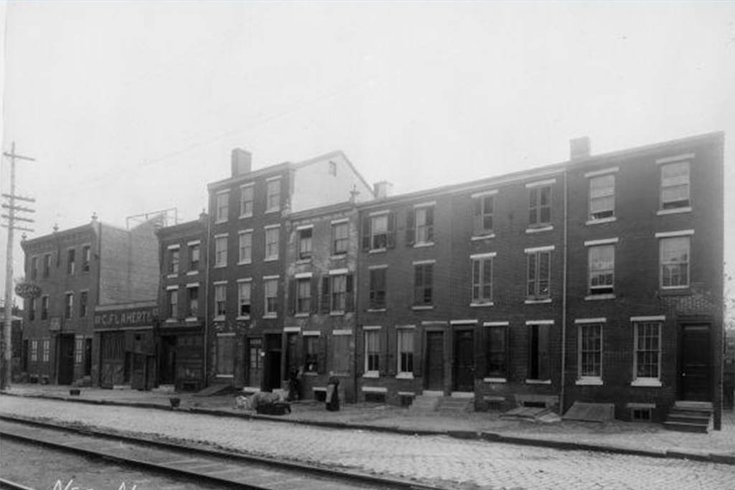 The 800 block of Washington Avenue in South Philadelphia, less than a year before a man started shooting along the block.

One hundred years ago today, a mass shooting rattled residents in South Philadelphia. Fortunately, only one person, a blind peddler, was killed.

The Harrisburg Telegraph from Harrisburg, Pa. carried an Associated Press story about the incident at the bottom of its front page of its Saturday, March 4, 1916 edition:

Stands in Phila. Doorway With Repeating Gun and Wounds Two Other Men and Women

Subdued and Arrested by Policemen After Terrific Struggle

By the Associated Press

A man believed to be insane stood to-day in the doorway of a house in the southern section of the city with a repeating rifle in his hands and before he was overpowered he shot and killed one man and wounded two men and two women.

Mrs. Mary Genovese and Mrs. Catherine Jacobs were wounded when a man opened fire on a South Philadelphia street on March 4, 1916.

Without any warning, the man, who is Anthonia Pronogo, 29 years old, emerged from the house and taking his stand on the doorstep, raised his rifle and shot at everyone who came within range.

One of his victims was a blind peddler who was shot through the body and dropped dead after running a short distance.

Pronogo gave battle to policemen but was subdued and arrested.

The Philadelphia WWI Years web site, which identified the shooter as Antonio Pringo, gave the following additional details, some differing from the AP report:

A man armed with a shotgun opened fire as he stood on the steps of the boarding house he lived in at 831 Washington Ave. (in what would be Bella Vista today) this morning. When the shooting was over 1 man was dead and 5 others seriously wounded. The murderer is Antonio Pringo. The dead man was identified as Samuel Gunhelsen, a blind broom peddler. The other victims are Mrs. Mary Genovese and Mrs. Catherine Jacobs, Mr. Samuel Shields, Mrs. Jennie Schmuckler and Mr. Charles Vidrin.

Pringo began by shooting wildly up and down the street from the steps of the house. When the shooting started neighbors and hucksters in the street ran for cover but some were hit by the pellets. Some men in the neighborhood heard the shots and headed toward the street. When they saw what was happening they gathered at the corner and decided to charge the shooter en masse. Pringo saw this and retreated back inside the house. He then ran out the back door onto League Street. There he saw the blind broom salesman and shot him in the chest killing him instantly. Pringo then went back into the house. By then police had arrived. They entered the dwelling and disarmed him. After bringing him outside the police had to surround Pringo while they waited for the patrol wagon because the men of the neighborhood were begging for a chance to deal with him themselves.

Police believe Pringo is demented. He told them he bought the gun today to kill a man who attacked him this morning. He said the attack was the result of a feud that started many years ago in Naples, Italy. He is being held at the 7th & Carpenter Police Station.