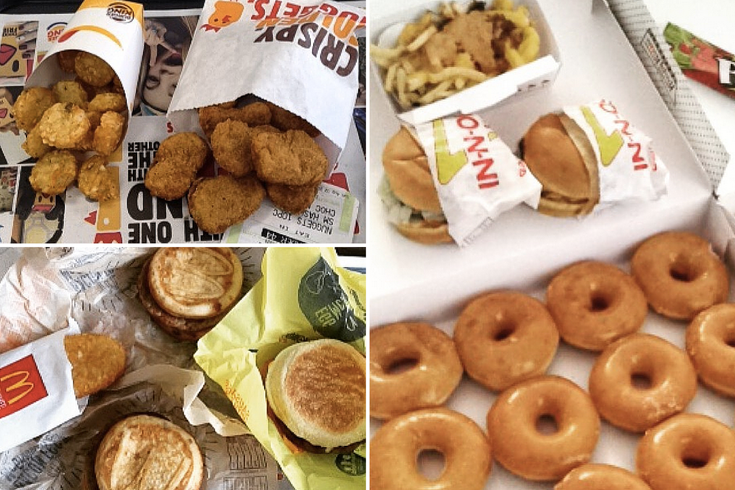 Even before smashing in 62 wieners to win Nathan’s 2015 title, Stonie gained worldwide recognition and more than 100 million views on YouTube for his self-engineered extreme-eating feats. He’s battled brain freeze and cholesterol overload to wolf down 12 pints of Ben & Jerry’s (13,400 calories) at one shot. He’s devoured 100 Eggo waffles drenched in milk and maple syrup in just over 36 minutes, considerably less time than it must have taken to toast them all.

Even more spellbinding than the sheer volume of food Stonie consumes in such short, gut-busting bursts is the fact that he’s somehow magically able to metabolize all those macronutrients. This is a young man who gobbled 23,000 calories of pumpkin pie in eight minutes to set the world record in April. And yet, amazingly, he’s still lithe enough to grind out a 17-minute, 43-second 5K. The mysterious aura of a man who has his pie and eats it too is what keeps Stonie’s admirers hooked. The first question they ask their hero, whenever they get the chance, is, “How do you stay so skinny after all those meals?”

In a Q&A video for his fans, Stonie admits the question is “kind of like impossible to answer.” Even so, he gives it his best shot.

“First off, it’s not like a magic pill or anything. I don’t pop a pill or do something like that, and I don’t have a crazy metabolism, despite what all of you think. It’s just diet and exercise. You know, I go to the gym a ton.”

He continues to shed light on his training diet.

“I know it sounds cliché, but I eat a lot of vegetables, whole grains, high-fiber bread and cereals, some fruits here and there, not a big fan. Mainly healthy fats like nuts, fish oils, lots of protein, like protein powders. I do a lot of supplements. Chicken breast, and I eat a lot of fish. I love my fish.”

Recently, comedian and filmmaker Barry Rothbart told Off-Ramp his competitive-eating documentary "Hungry" was “going to be a comedy piece, but then it turned into more of this look into this strange, niche world."

The film chronicles competitive eating’s biggest (and smallest) celebrities, chiefly 128-pound Takeru Kobayashi, who took the competitive-eating world by storm when he doubled Nathan’s hot dog eating record from 25 to 50 dogs back in 2001. And yet, Rothbart’s investigation into the dark underbelly of competitive eating apparently fails to answer “the only question on anybody’s mind at Nathan’s”: How do you get the contest out of your system?

According to Rothbart, "They don’t talk about it. We really wanted to find that out. It’s a pride thing. It’s very strange how they don’t want to talk about it."

Rothbart further honed in on our collective fascination with competitive eating.

He’s right. We all know what it’s like to overindulge, the shame of undoing “just” that top button, the pain of late gestational grade stomach distention, the desperate need to loosen a valve that doesn’t exist so neatly in human anatomy. According to research from the Calorie Control Council, the average American consumes 4,500 calories, nearly two days' worth of energy, during Thanksgiving Day alone. We all know how awful it feels to wake up the next morning, bloated, hungover and broke, minus all the Black Friday cash we spent as our wretched food coma ran its course. We know how our clothes (hardly) fit, how wrecked our gastrointestinal systems feel in the aftermath. It takes a year to forget our holiday digestive anguish before we’re ready and willing to go through it again.

Imagine scarfing five times your annual Thanksgiving feast in pumpkin pie alone. Stonie crammed 20 pounds and 13 ounces (83.5 slices) of the stuff down his throat in less time than it takes to preheat an oven. Every agonizing minute of Stonie’s eating feats is filmed. Whatever happens after isn’t. But, you know, he goes to the gym a ton. He does a lot of supplements. 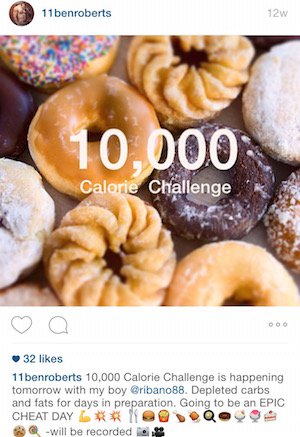 If Stonie’s gastric masochism sounds extreme, you might be surprised to hear about the 10,000 Calorie Challenge gaining momentum amongst the super-jacked, ultra-lean breed of YouTube fitness gurus with millions of subscribers. The essential rule of the challenge is simple: Eat 10,000 calories over the course of a single day. Liquid calories are frowned upon, however, they are acceptable. At least one dozen Dunkin’ Donuts should be demolished, if feasible. Wowing an audience means filming your (sped-up) food consumption with as little interruption and/or editing as possible, which means some 10,000 Calorie Challenge videos are more than an hour long.

Members of the 10,000 Calorie Challenge club echo Stonie’s diet and exercise philosophy: If you train hard and “eat clean” most of the time, you can cram yourself chock-full of junk food whenever your fitness plan permits a “cheat day.” 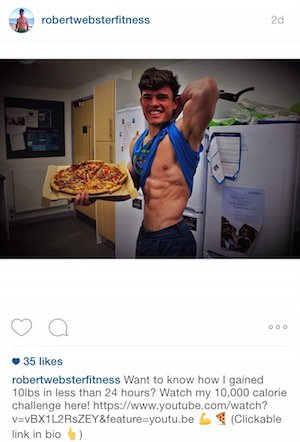 Lifestyle/fitness/wellness vlogger Josie Mai, who promotes intuitive eating and "moderation not deprivation," typically follows a 1,500-calorie diet and routinely offers her 37,000-plus fanbase tips on how to build pronounced glutes and break the cycle of binge eating. According to Mai, she took on the 10,000 Calorie Challenge during the holiday season so she could “get it over with” before spending the next four weeks prepping her body for a cruise. Her 10,000 Calorie Challenge vlog begins at McDonald’s.

“I haven’t had breakfast at McDonald’s for a long time, and now I’m about to stuff my face,” she says before digging into her 1,350-calorie “Big Breakfast” spread.

Throughout her 10,000-calorie cheat day (during which she visits the gym to “make some glute day gains” between frantic trips to fast-food restaurants), Mai obsesses over her shape in front of a full-length mirror and repeatedly laments her “chipmunk cheeks.” 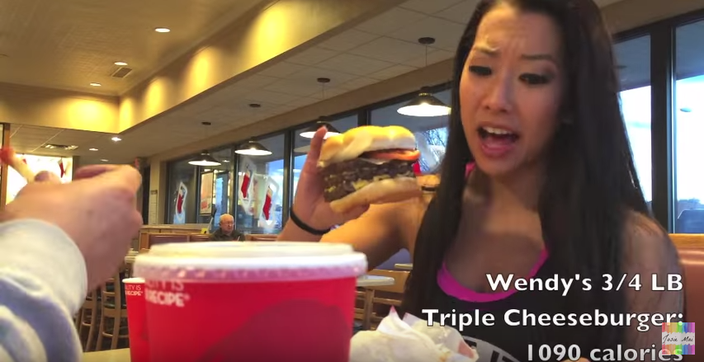 Bikini competitor Autumn Henderson-Brazie put fellow food and fitness extremists to shame when she attempted 20,000 calories in 24 hours. She began her "cheat day" like any other, with coffee, fasted training and a fat burner, because she’s “got to stay lean, right?” She then proceeded to stuff herself full of donuts, pizza, Chinese food, meal replacement bars/shakes and pounds upon pounds of candy, before capping off the evening with a slab of German chocolate cake. (Spoiler alert: Henderson-Brazie only made it to 15,887 calories. She tracked every last morsel in the MyFitnessPal app, with which she’s apparently all too familiar.)

At first glance, it might seem like the 10,000 Calorie Challenge, which demands participants binge eat, could be the antidote to the Collarbone Challenge and its twisted sister, the Belly Button Challenge, which encourage participants to starve. And yet, when you consider its roots, the 10,000 Calorie Challenge can be reduced to one side of the binge/starve combo young people are routinely served by their favorite Internet fitness stars. It’s easy to see how fans of Stonie and Mai could be duped into believing “all or nothing” is the way to achieve and maintain physical perfection.

Such perfection isn’t simply a matter of professing to “eat clean” and “detox,” while scrupulously tracking calories down to the last packet of ketchup, it’s also about creating the illusion that you’re not afraid to gorge yourself to the edge of what’s humanly possible, that you’re superhuman enough to survive with your svelte physique unscathed.