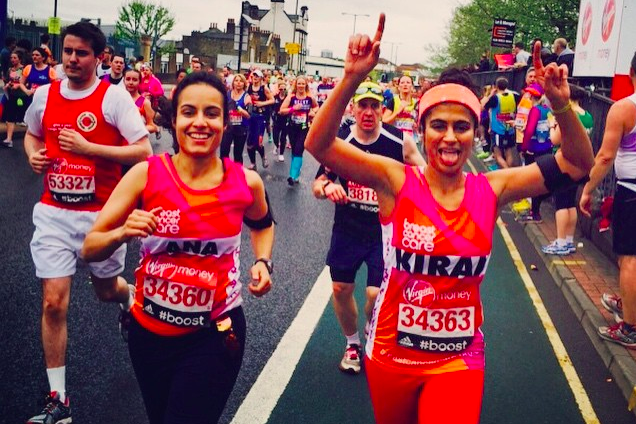 This week, Kiran Gandhi, a Harvard Business grad and traveling drummer for M.I.A., made headlines for running the 2015 London Marathon while menstruating freely.

I’ll be the last to argue periods aren’t a big deal. For most women, they’re a huge deal. Periods are a considerable source of pain, fatigue and distress. There’s not much we can do to change that. But they’re also a significant source of shame and embarrassment, and there’s a whole lot we can do to cease adding insult to injury.

This week, Kiran Gandhi, a Harvard Business grad and traveling drummer for M.I.A., made headlines for running the 2015 London Marathon while menstruating freely. Gandhi, who ran with friends to raise more than $6,000 for breast cancer care, wrote in a post on her personal website that she “ran with blood dripping down [her] legs for sisters [in the developing world] who don’t have access to tampons and sisters who, despite cramping and pain, hide it away and pretend like it doesn’t exist.”

“I thought, if there’s one person society won’t f--- with, it’s a marathon runner. If there’s one way to transcend oppression, it’s to run a marathon in whatever way you want.”

Gandhi is right. Marathons are well-known public demonstrations for overcoming illness, injury and injustice. No matter how many tens of thousands of runners toe the line at an event like the London Marathon, every single one of them is running for more than kicks and giggles. They’re running for cancer research. They’re running for charity. Amputees with cutting-edge prosthetics boldly inspire the masses, while others, like this person clad in a mankini, might simply pique our interest. Amidst all the tutus and superhero costumes, blood and other body fluids are just another part of the marathon experience. Snot rockets and digestive issues are frequent. Porta-potties are few and far between. Men racing in shirts they didn’t train in quickly realize bloody nipples happen.

Marathons celebrate what it means to be human. They are blood, and guts, and glory.

And yet it seems no marathoner has ever been hit with the backlash Gandhi received, simply for choosing to run during her period, without a tampon, in support of the millions of women around the world who can’t attend school or work because they don’t have access to feminine-care products during their “week of shame.” Because they’re ostracized for enduring what is healthy and natural. Because they’re regarded as gross and disgusting.

Western women (and, of course, men) were quick to hurl these same insults at Gandhi herself. Legions called Gandhi “gross” and “disgusting.” Some suggested she might even spread Ebola. One woman tweeted that she’d received violent threats for voicing her support of Gandhi on social media.

Such contempt is tinged with hateful shades of irony. Only a few decades ago, women weren’t allowed to run the marathon at all, for fear their uteruses would fall out. But even now that women’s participation in marathons is rapidly outpacing men’s, even though most women in developed nations have access to affordable feminine-care products that allow them to go about their daily, active lives, the residual shame associated with menstruation remains. If you have any doubt about that, just ask Donald Trump.

Gandhi’s protest wasn’t perfect. After all, it was spur-of-the-moment. Gandhi wrote that, as a first-time marathoner, she thought “It would have been way too uncomfortable to worry about a tampon for 26.2 miles,” which simply isn’t true for millions of female runners around the world. Gandhi also has yet to align herself with one of the many global organizations dedicated to raising supplies and awareness for girls fighting to overcome menstrual stigmas so they may attend school and enter the workforce. And yet, I believe what Gandhi did was heroic, because, by refusing to experience shame herself, she exposed the shame suffered by millions of others.

The public outcry surrounding Gandhi’s act is both unjustified and terribly significant. Some people fear her demonstration will incite a sort of zombie apocalypse, during which millions of crazed, infectious women abandon feminine-care products altogether and menstruate freely in the streets. That’s obviously never going to happen. However, maybe Gandhi will inspire millions of women (and men) to take a hard look at the culturally ingrained disgust we feel toward menstruation. Maybe the next time a woman begins menstruating while running a marathon, or while out to eat or at a movie, she won’t feel panic or mortification. Maybe, if all the people currently defaming Gandhi on the Internet were to spend their time and effort donating a few dollars to end widespread menstrual taboos, we might begin to repair much of the world’s economy.

You might say Gandhi is attention-seeking. You might deem her protest ineffective. But when you call her gross and disgusting, you only prove her point. To that effect, Kiran Gandhi’s marathon menstruation was a smashing success.