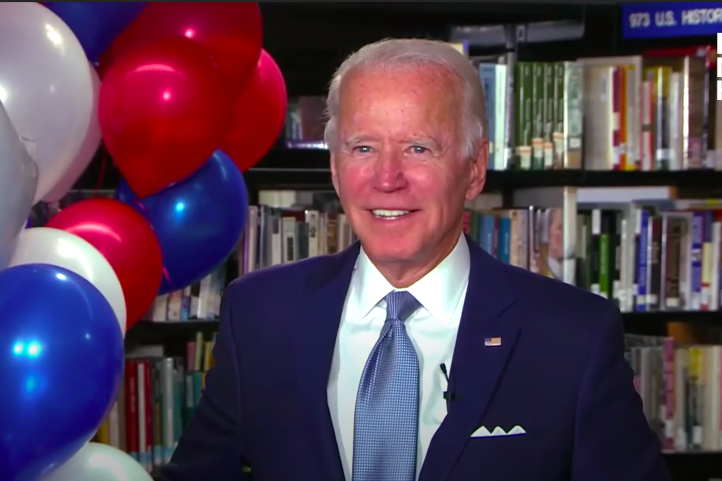 Joe Biden celebrated his formal nomination as the Democratic Party's presidential candidate Tuesday with his wife, Jill, and grandchildren at Brandywine High School in Wilmington, Delaware.

The family appeared in the school's library — in the U.S. History section, no less — after delegates from 57 states and territories announced their support of the former vice president in a virtual roll call.

Jill Biden, who taught at the school in the early 1990s, delivered her marquee speech in Room 232 — her former classroom. She discussed her husband's traumatic past, citing the deaths of his first wife, Neilia, and their 1-year-old daughter, Naomi, who both died in a car crash in 1972, and the loss of his son, Beau, to cancer in 2015.

Biden's ability to rise above his grief makes him the best candidate for the presidency amid the coronavirus pandemic, she said.

"How do you make a broken family whole?," Jill Biden asked. "The same way you make a nation whole. With love and understanding — and with small acts of kindness. With bravery. With unwavering faith."

"Joe’s purpose has always driven him forward," she added. "His strength of will is unstoppable. And his faith is unshakable — because it’s not in politicians or political parties — or even himself. It’s in the providence of God. His faith is in you — in us."

Colin Powell, a retired general and former secretary of state under George W. Bush, endorsed Biden, saying he would "unite us" as president. Cindy McCain, widow of the late Republican Sen. John McCain, did not formally endorse Biden, but she talked positively of McCain's friendship with Biden.

Delegates delivered their vote tallies in pre-recorded speeches during the virtual roll call.

Pennsylvania Sen. Bob Casey stood outside Biden's childhood home in Scranton. He delivered a heartfelt story of Biden's father losing his job when the Democratic nominee was just a child. Many working families are experiencing similar fears, Casey said.

"But Joe Biden has a plan to help them, and to help our country 'Build Back Better,' creating millions of good-paying jobs so more parents will be able to tell their kids what Joe’s dad said to him all those years ago, 'It's gonna be OK,'" Casey said.