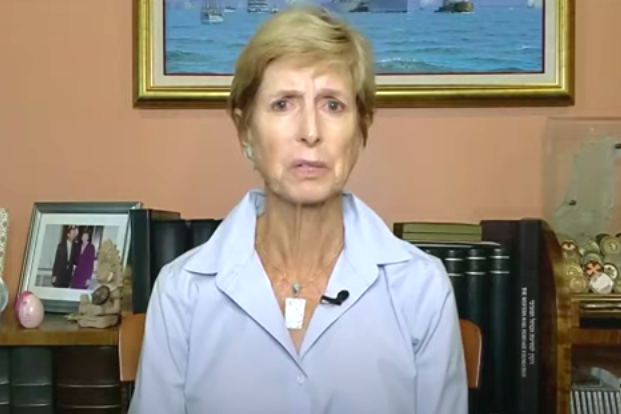 Former New Jersey Gov. Christine Todd Whitman was among the notable Republicans who crossed the aisle during the first night of the Democratic National Convention on Monday and showed their support for Joe Biden.

Whitman and others spoke out against President Donald Trump being re-elected to a second term, during a portion of the convention called "We the People Putting Country Over Party." Much of their criticism of the president referenced Trump's response to the COVID-19 crisis.

"What am I doing here? I'm a lifelong Republican," Whitman, 73, said. "My parents were introduced at the Republican National Convention by their parents. That's how far back it goes."

Whitman served two terms as New Jersey's governor from 1994 to 2001 and was the Environmental Protection Agency administrator under President George W. Bush.

She has split from the Republican party before. In the 2016 election Whitman backed Hillary Clinton. She also has been critical of the Trump administration's environmental policies; accused Trump of compared Trump to Adolf Hitler; and penned a 2018 op-ed arguing the president is "unfit for office." And last week Whitman tweeted that Trump was undermining democracy for his unfounded attacks on mail-in voting and failure to fund the U.S. Post Office.

"But this isn't about a Republican or Democrat," Whitman said. "This is about a person, a person decent enough, stable enough, strong enough, to get our economy back on track. A person who can work with everyone, Democrats and Republicans, to get things done. Donald Trump isn't that person. Joe Biden is."

Other Republican women such as Meg Whitman, a businesswoman and the current CEO of Quibi, and Susan Molinari, a former member of the U.S. House of Representatives, also endorsed Biden.

Former Ohio Gov. John Kasich, a Republican, also spoke in support of Biden. Kasich was a primary challenger against Trump in 2016. He has been a frequent critic of the current administration since then.

The DNC is taking place virtually from Aug. 17 to Aug. 20 due to COVID-19. The first night of the DNC consisted of a series of virtual videos and was hosted by actress Eva Longoria to show support for Biden.