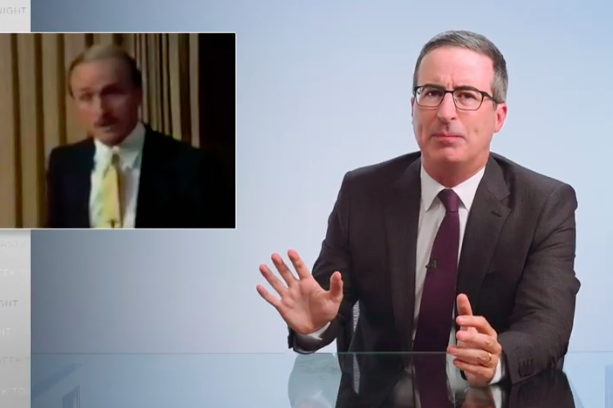 A former Philadelphia assistant district attorney was featured prominently Sunday night in the latest episode of HBO's "Last Week Tonight," in which host John Oliver dug up an old jury selection training video that showed instances of overt racial bias.

Oliver's latest deep dive examined the flaws of jury selection in the United States, where the process often excludes certain populations in order to influence the likelihood of obtaining a conviction, both indirectly and directly.

The segment pointed to a leaked 1986 video in which then-assistant D.A. Jack McMahon educated young prosecutors on the importance of avoiding some Black jurors, particularly "intelligent" Black jurors and Black women. (The relevant portion of the video starts at about the 9:50 mark).

"Another factor, I'll tell you, in selecting Blacks — you don't want the real educated ones," McMahon said. "Again, this goes across the board of all races. You don't want smart people. But if you're sitting down and you're going to take Blacks, you want older Blacks."

At another point in the video, McMahon singled out Black women.

Oliver said his team reached out to McMahon, who was "very upset" and lamented in an email that, "... everyone has tried to some how make this racist."

In the email, which was only partially quoted, McMahon expressed that, "... the best jury is bi-racial."

When PhillyVoice contacted McMahon on Monday afternoon, he provided a bulleted response to his appearance on "Last Week Tonight" and Oliver's characterization of the video:

4) Times change and the (Batson vs. Kentucky case), in my experience as (a) defense attorney for 31 years, is not as prevalent today

Later in the segment, Oliver pointed to a review of felony cases tried by McMahon, which found that Black jurors were removed at such a high rate that the odds of it happening by chance were "less than one in a quadrillion."

This is not the first time McMahon's video has resurfaced in recent years concerning the problem of racial bias in jury selection.

In 2015, a Georgia death penalty case from a 1987 homicide reached the U.S. Supreme Court over questions about the exclusion of Black jurors. The Black defendant, who had been convicted of murder, was sentenced to death by an all-white jury. The Supreme Court ultimately ruled in 2016 that racial bias was at play in eliminating Black prospective jurors, thus violating the Constitution under Batson vs. Kentucky (1986).

An amicus brief filed with the Supreme Court in the Georgia case touched on the Philly training video:

Prosecutorial race discrimination is sometimes frighteningly overt. In 1986, Jack McMahon, an assistant district attorney in Philadelphia, created a training film teaching prosecutors to exclude young blacks from juries. He explains in the video that “blacks from the low-income areas are less likely to convict”; “you don’t want those people on your jury”; “it may appear as if you’re being racist, but again, you’re just being realistic” ....

In 1997, McMahon ran a Republican campaign for Philadelphia District Attorney against incumbent Lynn Abraham, who had faced her own share of racial bias accusations. In the midst of the campaign, Abraham leaked the full hour-long training video in which McMahon discussed excluding Black jurors, among other strategies to consider in jury selection.

At the time, McMahon called Abraham's leak "trickery," complaining during a press conference that the D.A. was "risking the conviction of 36 murderers, including cop-killers, just for her own political gain," The New York Times reported.

"This good person and this good candidate will not cower to the transparent trickery of this district attorney, this life-long politician," McMahon said. "I have been stopped in the street by many African-Americans who wanted to shake my hand. They know how I've battled racism."

During his 12 years in the Philadelphia District Attorney's Office, McMahon spent the majority of his time in the Homicide Unit prosecuting high publicity murders, including gang-related cases and police killings.

McMahon went into private practice in 1990 and has served as a criminal defense attorney ever since. His list of high profile clients includes Kermit Gosnell, the West Philadelphia abortion doctor who was sentenced to life in prison in 2013 for the murder of three late-term fetuses.

"If there is a high profile case in this area or difficult complex case then there is a good chance you will see Mr. McMahon involved," the attorney's website says. "It is this wide ranging experience and skill that makes Mr. McMahon quite possibly the 'best' criminal defense lawyer in this area."