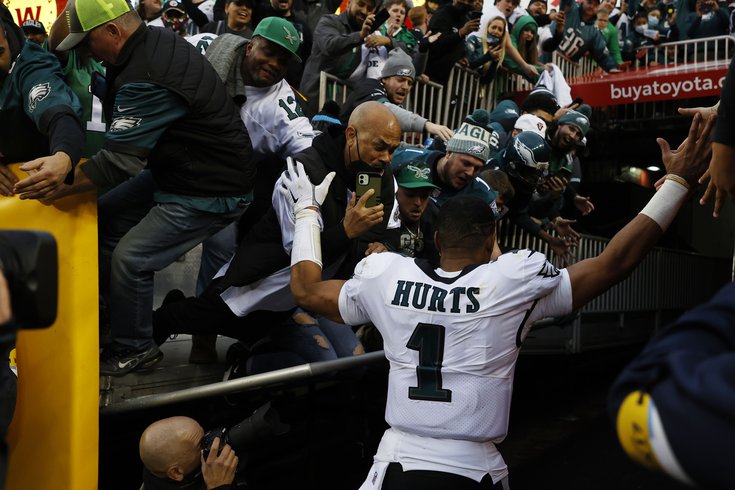 The weather may be terrible in the Philly area, switching between rain and snow, but I'm thinking of better days and vacations to come in the fall.

For Eagles fans wanting to take to the road to follow their squad this upcoming season, where's the best spot to hit?

I had previously written that the Eagles squaring off with the Cardinals in Mexico City, where the Cards will host a game this upcoming season, would top the list if that's how the schedule played. This is the list I came up with in late February with my reasoning:

1. Arizona Cardinals (Weather would be welcomed!)

2. Indianapolis Colts (If Carson Wentz is still under center for them.)

4. Houston Texans (Rub it in their fans faces about Philly having James Harden?)

6. Dallas Cowboys (How far are Eagles fans willing to go in enemy territory?)

8. Washington Commanders (That’s the consensus worst stadium in the NFL.)

Even if the Eagles play Arizona in the team's normal home site, that point about the weather remains apt and keeps them in the top spot. Selfishly, my soon-to-be in-laws live in Tucson and I wouldn’t mind killing two birds with one stone by visiting them and attending the Eagles-Cardinals game.

Indianapolis falls to the bottom of the list in the aftermath of the Carson Wentz trade which sent the former Eagles QB to Washington. It's a rough weather area, especially if this game is in November or December. Who’s going to be their quarterback anyway? Marcus Mariota? Sam Ehlinger? The latter option would be hilarious given that Ehlinger broke a bunch of Nick Foles' passing records at Westlake High School in Texas. Wentz sadly can't escape that shadow, can he?

Anyway, the juice factor has been lost for a trip to Indianapolis. The idea of getting the legendary shrimp cocktail at St. Elmo Steak House is enticing, but it’ll be a hard pass unless I’m there for work-related reasons.

Chicago remains strong. I’m not some huge traveler, but in my limited experience, Chicago might be my favorite non-Philly city. It stays high up.

Houston? It is what it is. I’m assuming decent weather. It’s a huge and thriving city, so I’m expecting it to be at least an okay vacation destination.

Giants, Cowboys and Lions? Bleh. Road trips against divisional foes have always felt a little risky to me for Eagles fans. Does karma rear its head? I’ve gotten pushback on having Detroit low in my previous rankings, but, hey, someone has to be seventh on the list. I’ll defer to those who’ve been to the Motor City though. It’s only fair.

The Commanders trip is obviously that high because of the Wentz factor. If the Eagles were to open their season in Landover against the Commanders, that’s really kicking things off with a bang in Wentz’s first game against his old team. If the Eagles host Wentz and the Commanders before they play them on the road, they might fall in the rankings because that initial fire is subdued a bit after the first meeting.

Yes, that stadium is a disaster and it’s in the middle of nowhere in the DMV with unfathomably bad roads leading there from the surrounding area. Still. It’s Wentz’s first game against the Birds. That takes precedent.

I still really need to get back to Chicago. Here's hoping that the Bears game takes place in September or October rather than December or January.

I’m banking on doing another road trip ranking once the official NFL schedule trickles out over the next month or two.