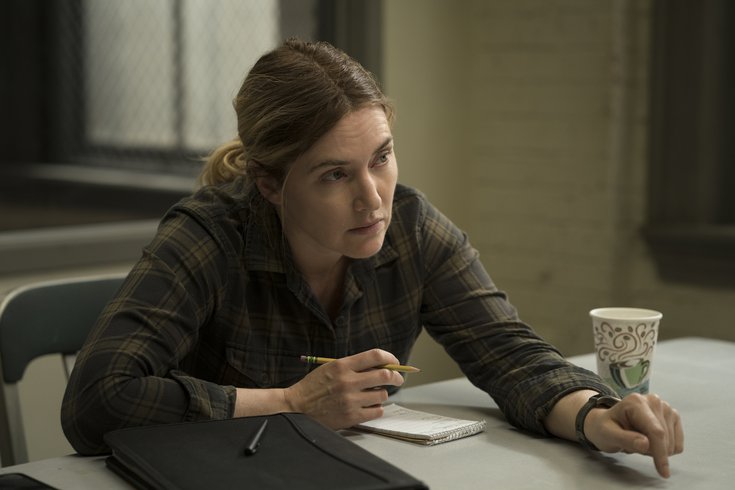 Kate Winslet's portrayal of detective Mare Sheehan in 'Mare of Easttown' earned her a Golden Globe nomination for best performance by an actress in a limited TV series.

More accolades could be coming soon for "Mare of Easttown."

The murder-mystery show was nominated Monday for two Golden Globe Awards this year, including for best limited TV series.

Kate Winslet's portrayal of detective Mare Sheehan earned her a nomination for best performance by an actress in a limited TV series.

Set and filmed in Philadelphia's western suburbs, "Mare of Easttown" tells the story of Winslet's character as she seeks to solve a murder and two missing persons cases while navigating through struggles in her personal life. The seven-episode series is available to stream on HBO Max.

Winslet's performance as Sheehan earned the British actress a spot on Time Magazine's "100 Most Influential People" list this year.

Winslet has already captured four Golden Globes in her career, having won most recently in 2016 for her performance in "Steve Jobs." Her last victory in the best performance by an actress in a limited TV series category came in 2012 for "Mildred Pierce."

Will Smith may finally walk away with the first Golden Globe Award of his career after the West Philly native was nominated for best actor in a drama film for his performance in "King Richard." The film earned three other Golden Globe nominations, including for best drama movie.

Starring Smith as Richard Williams, "King Richard" tells the story of Serena and Venus Williams' father, who trained both of them as young girls and served as a driving force for their success in professional tennis. The film is still in theaters and available to stream on HBO Max.

Chester County native Adam McKay's newest film, "Don't Look Up," earned four Golden Globe nominations too, including for best screenplay and best musical or comedy motion picture. McKay has yet to win a Golden Globe Award in his career too.

DiCaprio and Lawrence play two astronomers who must warn society that a comet the size of Mount Everest will hit Earth in six months and destroy the planet. However, the scientists find that nobody seems too worried about the apocalyptic threat.

DiCaprio and Lawrence's performances have earned each a nomination for best actor and actress in a musical or comedy film. Last week, the film garnered six Critics' Choice Award nominations.

"Don't Look Up" debuted in select theaters last Friday and will premiere on Netflix Dec. 24.

The most film nominations this year went to both "The Power of the Dog" and "Belfast" with seven apiece. The HBO drama "Succession" led the way on the television side with five nominations.

The 2022 Golden Globe Awards will take place Jan. 9, but the 79th annual event will not be televised. NBC, which had previously aired the ceremony, declined to participate this year amid allegations of diversity issues within the Hollywood Foreign Press Association, the organization behind the awards show. The HFPA has been criticized across the entertainment industry for its lack of Black members and nominees.

Below is a complete list of the 2022 Golden Globe Award nominations.

Best Performance by an Actor in a Television Series — Drama

Best Performance by an Actress in a Television Series — Drama

Best Television Limited Series or Motion Picture Made for Television

Best Performance by an Actress in a Supporting Role in a Series, Limited Series or Motion Picture Made for Television

Best Performance by an Actor in a Supporting Role in a Series, Limited Series or Motion Picture Made for Television

• "Be Alive" from "King Richard" — Beyoncé Knowles-Carter, Dixson
• "Dos Orugitas" from "Encanto" — Lin-Manuel Miranda
• "Down to Joy" from "Belfast" — Van Morrison
• "Here I Am (Singing My Way Home)" from "Respect" — Jamie Alexander Hartman, Jennifer Hudson, Carole King
• "No Time to Die" from "No Time to Die" — Billie Eilish, Finneas O'Connell

Best Actor in a Supporting Role in Any Motion Picture

Best Actress in a Supporting Role in Any Motion Picture

Best Actor in a Motion Picture — Musical or Comedy

• Mahershala Ali, "Swan Song"
• Javier Bardem, "Being the Ricardos"
• Benedict Cumberbatch, "The Power of the Dog"
• Will Smith, "King Richard"
• Denzel Washington, "The Tragedy of Macbeth"

Best Actress in a Motion Picture — Musical or Comedy