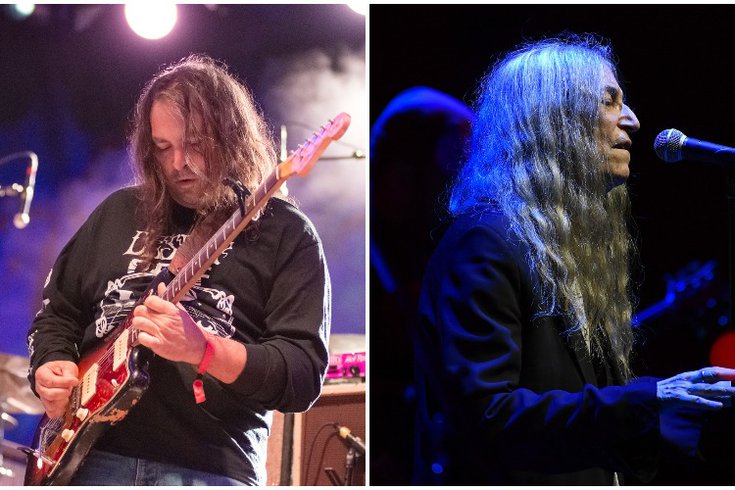 The War on Drugs and Patti Smith will headline the 2022 XPoNential Music Festival this September on the Camden waterfront.

WXPN's XPoNential Music Festival returns to the Camden waterfront in September, featuring a pair of rock artists with deep ties to the Philadelphia region.

The War on Drugs and Patti Smith kick off the three-day concert at the Waterfront Music Pavilion on Friday, Sept. 16. They will be joined on opening day by the rock band Geese.

Then at the pavilion on Saturday, Sept. 17, there will be performances by Nathaniel Rateliff & The Night Sweats, The Revivalists and the Philly brass band Snacktime.

There will be more acts taking the stage at nearby Wiggins Park in Camden on Sept. 16-18. Among the notable artists are Jenny Lewis, Taj Mahal, Kathleen Edwards and Valerie June.

Ticket packages for the 2022 XPoNential Music Fest go on sale Friday at 10 a.m. Three-day passes that provide access to all festival performances at the Waterfront Music Pavilion and Wiggins Park start at $108 for WXPN members, $216 for the general public and $15 for children ages 2-12.

One-day tickets to the shows at Waterfront Music Pavilion or Wiggins Park range from $50-$75 for adults. One-day passes for children ages 2-12 are $5.

This will be the 29th year that WXPN has hosted its own music festival. The concert became the XPoNential Music Festival in 2007.

We're back! The XPoNential Music Festival presented by @subaru_usa returns to the Camden Waterfront on Sept 16, 17 and 18! We have an INCREDIBLE lineup this year! Join us at Wiggins Park and and @MusicWaterfront Pavilion. Details available now at https://t.co/EjF3mZLsNU! #XPNFest pic.twitter.com/ViqciaBhOr

The War on Drugs' has performed four times at the XPoNential Music Festival, most recently in 2018. The Philly indie rock band is on its 2022 world tour and already performed at The Met Philadelphia in January.

The War on Drugs released its fifth studio album, "I Don't Live Here Anymore," in October. The 10-track album was recorded at seven different studios over three years. The band has described the album as "an uncommon rock album about one of our most common but daunting processes – resilience in the face of despair – and an expression of rock ’n’ roll’s power to translate our own experience into songs we can share and words that direct our gaze toward the possibility of what is to come."

Pitchfork and The Guardian have included "I Don't Live Here Anymore" among their lists of the 50 best albums of 2021.

This will be Patti Smith's third performance at a WXPN event, with her most recent appearance coming at the All About The Music Festival in 2005. The Rock & Roll Hall of Famer headlined the radio station's Singer Songwriter Weekend at Penn's Landing in 2000.

Before becoming the "punk poet laureate" in New York in the 1970s with her hit debut album "Horses," Smith spent some of her childhood living in the city's Germantown neighborhood before moving across the river to Pitman and Deptford, both in Gloucester County.