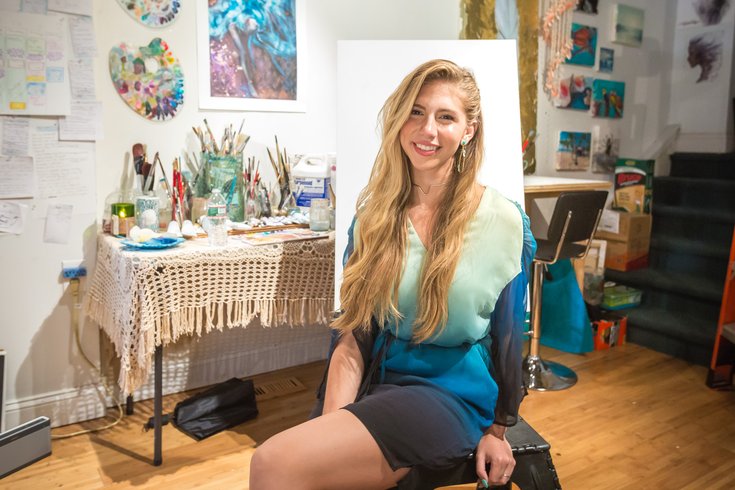 Artist Lindsay Rapp in the studio of her Old City gallery.

Stroll into Lindsay Rapp Gallery at Second and Arch streets, the outpost of Clearwater, Florida-native artist Lindsay Rapp, and it's not difficult to imagine where its wall-to-wall blue paintings draw their inspiration: In vibe, any onlooker half expects to hear ocean waves rolling in the distance.

It's part of a connection Rapp, a 25-year-old Pennsylvania Academy of Fine Arts alum, said she felt with the ocean only after moving to the concrete-laden streets of Philadelphia.

"I wasn’t aware of my connection with the ocean until I was removed from being around it every day," Rapp told PhillyVoice. "I miss it a lot. But, I feel like that actually has really helped my artwork — I paint a lot from memories and nostalgia of having my lifestyle around the water, the beach. I'm very emotionally-based."

Her art gallery has swum to the surface in the past year as a standout in an arts district that's experienced loss in recent years; Artists' House and Rosenfeld galleries, among other nearby artist locales, shut their doors. Take a gander at many pieces of art in the gallery, and you'll likely find — almost refreshingly — a red sticker on it indicating it's been sold already. 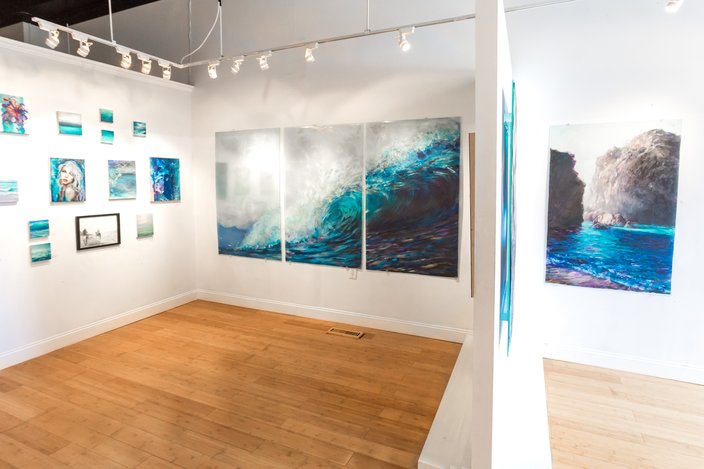 Inside the Lindsay Rapp Gallery, located at 60 N. Second St. in Old City.

"I’ve sold quite a bit — I’m pretty happy with how everything has been going here," she said. "I actually need to paint a lot more now to refill the gallery ... I try to give people a positive message, a positive feeling. I like people to pull something from their own lives from the images. But obviously, I have my own life experiences I put into the images.

"Each painting has a different message, but I guess the common theme is of water and women. “

The technical precision of the women painted is a result of PAFA's model-intensive program, she explained. That, and an innate skill she's built upon since her pre-school teacher noticed her "drawing fingernails" on stick figures, as others "had arms sticking out of their heads."

On display for September is a lineup of friends and family she's painted (including an impressively three-dimensional portrayal of a ballerina dancing on the floor of a pool), but also one less-model-oriented painting of a ship. 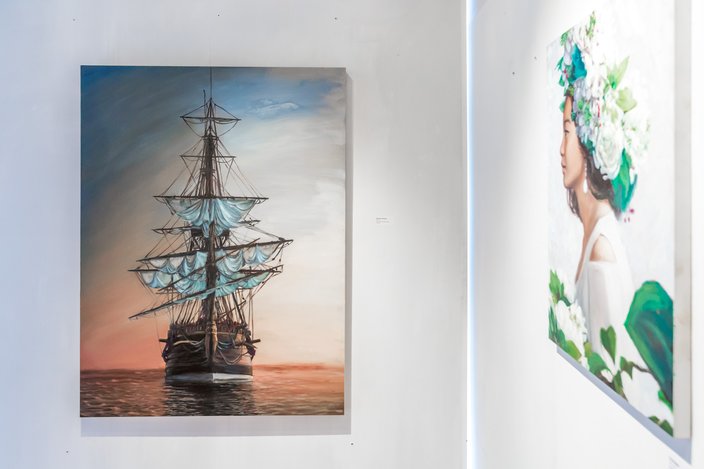 "That one was inspired by my dad, actually. There’s a poem called ‘Gone from my Sight' that really comforted him when he lost his father, and it’s about how when a ship goes over the horizon, it’s not necessarily gone, it’s just out from sight. I wanted to kind of paint something that was a positive view on that — something comforting, not thinking about something going away, but over the horizon. Arriving."

Rapp intends to re-up for another year at the space, so don't expect it to shutter anytime soon. She described the area as "not competitive at all," and a reason why she sticks around.

"If one shop does well, then everyone does well; they bring more people," she said.

Lindsay Rapp Gallery operates Tuesday through Thursday, 1 p.m. to 4 p.m., and Fridays from 6 p.m. to 9 p.m. Keep an eye out for a new collection of paintings to adorn the walls in the month ahead as she replaces many of her sold pieces.