5 healthy food switches and where to try them in Philly 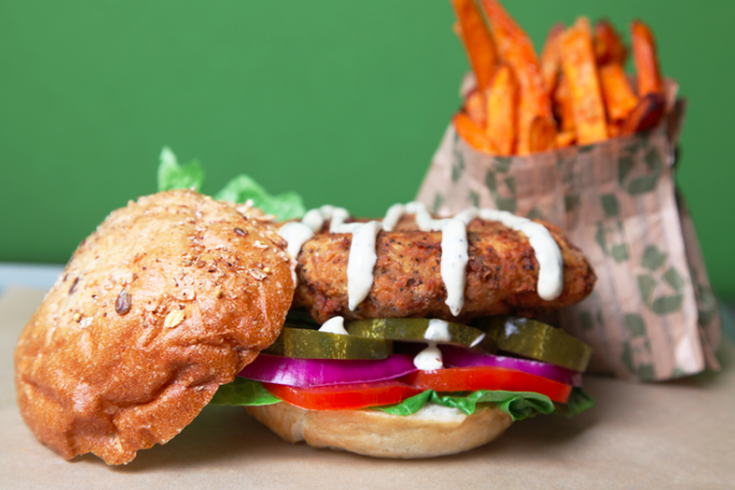 Sweet potato fries, like the ones offered at HipCityVeg, can be a fun replacement for french fries.

Once summer rolls around, everyone starts promising that this is gonna be the season when they start exercising every day (OK, maybe every other day, or — you know what, let's aim for once a week, definitely at least once a week) and also eating right. There are endless articles telling you what kinds of food you should eat (whole grains! superfoods! omega-3!) but here's something more important: What foods do you want to eat?

Eating well is easier when you're actually excited about the stuff you're putting in your mouth. So consider simple switches you can make in your diet that won't just be healthier, but more fun, more fresh and just plain different from the general routine. Here are five healthy switches to consider:

1. Pour out red wine instead of beer

Numerous studies have shown a link between moderate drinking of any kind of alcohol and heart health (key word: moderate!), but scientists are particularly intrigued by a compound in red wine called resveratrol.

The Mayo Clinic notes that several studies in lab animals have suggested that resveratrol protects blood vessels and helps lower cholesterol. One 2015 study found that mice on a high-fat diet stored less fat in the liver and had lower blood sugar after they were given a powder made from pinot noir grapes. Naturally, you'll want to take a class at Pinot Boutique in Old City to learn more — purely for your health, of course.

2. Go from white to technicolor

White rice is just about the plainest food you can eat on the planet. Luckily, there are as many alternatives to the white stuff as there are colors in the rainbow. You can try brown rice, "forbidden" black rice (which actually turns purple when you cook it), red rice, multi-grain rice studded with barley or quinoa...all offer a different kind of culinary adventure, but the main advantage of the more colorful kinds of rice is that they are whole grains rather than refined grains and thus have retained more dietary fiber and other important nutrients.

At Hai Street Kitchen, which has two brick-and-mortar locations and a food truck in Philly, you can order any sushi roll or bowl with whole grains.

3. Chickpeas instead of animal protein

Touted as "the unsung heroes of our food chain," beans are as high in protein, fiber and vitamins as they are low in fat, making them an awesome way to get the most bang for your caloric buck. The U.S. Department of Agriculture's nutritional guidelines recommend 1.5 cups of legumes (beans or peas) per week, so it's well worth your while to try to replace some meat dishes with legume-based protein instead.

One legume-licious dish to try: the Panelle sandwich at Paesano's, a sandwich joint in South Philly and Northern Liberties. It's a Sicilian-style chickpea pancake with roasted tomatoes, fennel pepperoncino and "Godzuki," a house-made dressing whipped up from sour cream and hot sauce.

All right, nowadays everyone is offering sweet potato fries on the menu, but if you haven't tried them yet, you seriously need to. Consider: One cup of sweet potatoes has 377 percent of your daily recommended serving of vitamin A. 377 percent! Plus, sweet potato fries make for better leftovers: They don't get all dry and chewy like day-old french fries do.

The most popular sweet potato fries in Philly are probably at HipCityVeg, which has outposts in Rittenhouse Square and University City.

5. A surprise instead of the usual shopping trip

The best way to shake up your routine and get yourself to finally start eating fruits and veggies: Let the farm decide what's going on your plate. CSAs (Community Supported Agriculture) or farm-share boxes give you a box of produce from local farms each week. What's inside is a surprise — you'll get whatever's in season — so you'll find yourself trying new things every week. (Hey, it got me to cook a rutabaga for the first time.)

The most affordable farm-share option in the Philadelphia region is "Farm to Families," which is sponsored by St. Christopher's Foundation for Children. The goal of the program is to make fresh food affordable for everyone, which is why the Foundation offers subsidies for low-income people. A box with five different kinds of fruits and vegetables costs $14 at full price or $10 subsidized, and unlike most farm-shares, you're not obligated to buy a box every week for the whole season.

You can pick up a box at 1825 Frankford Ave. in Kensington, at St. Christopher's Hospital for Children in North Philadelphia or at St. Mary Medical Center in both Levittown and Bensalem. Click here to learn more.