97.5 The Fanatic's Anthony Gargano off the airwaves for second day 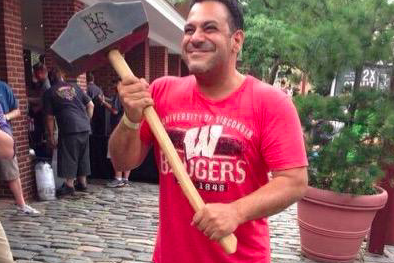 For a second straight day, 97.5 The Fanatic morning host Anthony Gargano was not on the air Wednesday, leading some to speculate whether his absence is directly tied to the departure of live update anchor Maureen Williams.

A station source told Crossing Broad on Monday that Williams, a former Gargano colleague at Sportsradio 94WIP, had been let go for reasons that weren't immediately clear. Williams and Gargano joined 97.5 The Fanatic at the same time in what was described as a "package deal," to the extent such arrangements exist in business.

"I’m hearing that Gargano obviously wasn’t thrilled with the news and has taken at least tomorrow off, though I didn’t get the sense it was (a) storming out sort of scenario," Crossing Broad's Kyle Scott wrote Monday.

Gargano was not on the air Tuesday and was missing again Wednesday as Eytan Shander, Geoff Mosher and Joe Tordy co-hosted the morning slot. Jamie Lynch, Gargano's co-host, is on vacation this week. His previous, third co-host Jon Marks took over WIP's night slot in February.

The show's ratings remain well behind the WIP morning show hosted by Angelo Cataldi, whose future with the station remains undecided after more than 25 years on the air. His contract is up at the end of the year.

97.5 The Fanatic, formerly owned by parent company Greater Media, was part of a portfolio of 17 stations sold last year to Beasley Media Group, which posted a 90 percent increase in year-over-year revenue since the acquisition, according to the company's fourth-quarter earnings statement.

On a stand-alone basis, however, revenue from Greater Media's former stations declined by 6.1 percent, or about $2.3 million, during the same period. About 60 percent of that decline was attributable to the Philadelphia market.

Sources told the Inquirer that Gargano is expected to miss the rest of the week. Regardless, Thursday's afternoon's guests will include ESPN's Tim McManus and PhillyVoice's own Jimmy Kempski.

We have a BIG Eagles show tomorrow! From 10-12 we will have @JimmyKempski in studio and from 12-2 @Tim_McManus will join us! Don't miss it!