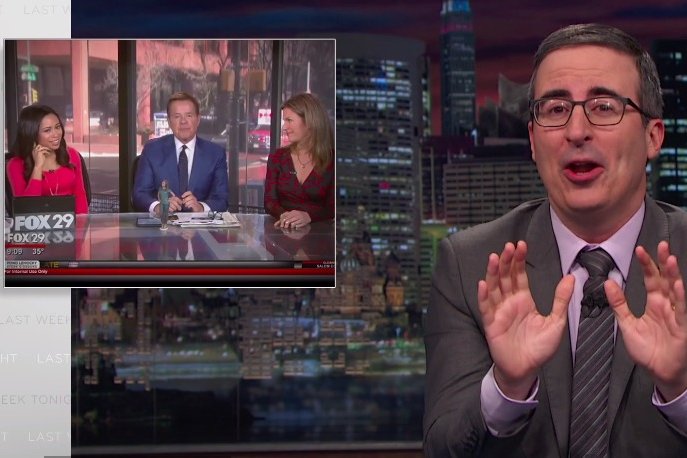 Morning news viewers in Philadelphia are well-acquainted with Jerrick's eccentric personality. The general template for "Good Day Philadelphia," if you boil it all down, surrounds a kooky dad type (Jerrick) who only sort of tries to understand the world of his talented millennial co-host (Alex Holley) because it's usually funnier that way.

We say "usually" because Jerrick has been known to skirt lines in the past. When he blurted out that Kellyanne Conway was "good at bull****" for coining the term "alternative facts," most people seemed to think that was hilarious. FOX29 still suspended him for a week. He used explicit language on-air. You can't do that.

This time, Jerrick walked right into the eye of the #MeToo storm and essentially asked to be torn to shreds.

Only Jerrick can say whether the impact of these clips going national is more than he bargained for with his attempt at humor. Maybe in another time, Jerrick's lascivious act might have been seen and dismissed as primarily that — a provocative and avuncular riff on gender — but for him to be unaware this is a how-to on creating PR nightmares in 2018 is either pretty incredible or he doesn't really give a damn.

An attempt to reach FOX29 for comment earlier Monday was not returned. Jerrick hasn't publicly commented on Oliver's criticism and Holley, whose patience for Jerrick's unpredictability should win her medals, hasn't thrown her co-anchor under the bus now that (or just because) this has become a story.

Without defending a word Jerrick said, it really is all-too-easy to forget that local viewers didn't bat much of an eye at the segment when it aired Thursday morning, judging by social media posts on March 8.

Fast forward to Monday and the reactions on Twitter are mostly calling for Jerrick's head. There are some people standing up for him by suggesting you really have to know him (and presumably Holley and Karen Hepp's professional relationship with him) in order to get that this is part of what the show permits for entertainment, up to a point. Many, many others want Jerrick to be fired.

Here's a look at what's being said.

Hey @MikeFOX29 saw ya on @HBO Last Week Tonight with @iamjohnoliver last night , I think you must go! #TimesUp

Hey @LastWeekTonight and John Oliver, you’re just mad that @MikeFOX29 is both more famous and humorous than you are! Don’t be so peanut butter and jealous! #teamMike

@FOX29philly I am appalled by your anchor Mike Jerrick’s behavior on #InternationalWomensDay !! He should be out of a job especially considering the #MeToo movement. What he did was absolutely sexual harassment at work. Disgusting. 🤮

@MikeJerrick is a coward who would rather delete/lock down all his social media than stop being creepy (ON AIR even!!) towards his female coworkers. Glad to see that’s working out so well for you Mikey boy

I'm sorry. He is just kidding. this is what's wrong . Women who find this offensive....

Hi from this Philly expat just seeing the footage from #internationalwomensday2018 on @LastWeekTonight re: @FOX29philly omfg did you guys fire #mikeJerrick yet? Disgusting!!!!!! pic.twitter.com/efcQu6QEbU

Imagine you’re #mikejerrick and you went to sleep because you have to be on the air at 5am... and you see that your phone has 999 notifications

I disagree with this view on Mike Jerrick. I am a liberal woman that can understand how some would see this as offensive but if you understood Mikes on air personality...you would know that he is like a comedian and the viewers should not take his on air jokes seriously.

Jerrick is the man

I'm a big fan of all of the female anchors, journalists and on air talent on @FOX29philly. Please do the right thing and get rid of Mike Jerrick. Your employees and dedicated viewers deserve better. We've been creeped out by him for years. Enough is enough.

@FOX29philly Mike Jerrick is an embarrassment to the city. Fire him. Don't think twice. #firemikejerrick #fire@mikefox29

Mike Jerrick getting roasted on a national level....finally!!!!!!

@FOX29philly Now that pervert Mike Jerrick has been made famous for all the wrong reasons by @LastWeekTonight, maybe its time to address whats painfully obvious to all of us who have suffered through countless minutes of his akward "interactions" and stop pretending its okay

John Oliver has earned himself a reputation for being aggressive about flagging disrespect toward women, at least as much as he has for objecting to anything else ethically wrong. He memorably caught Dustin Hoffman off guard last year with a pointed series of questions about sexual harassment allegations. Oliver later said he regretted the timing of his interrogation.

We've seen Oliver do follow-up segments about locally inspired subjects that struck a nerve, such as the model train display he had built for Scranton's WNEP-TV. It's fair to ask whether he'll revisit this incident once new information comes to light from FOX29 and Jerrick, a family man who's now famous for reasons he'd probably rather not be.