Against backdrop of U.S. history, 69 immigrants trade in green cards for citizenship

'I feel different,' said an Algerian native. 'I feel like I belong in this country now' 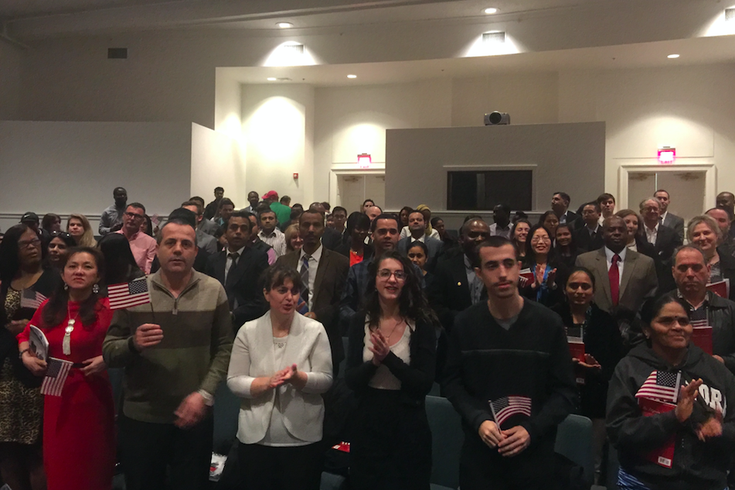 At Washington Crossing Historical Park, 69 people took the Oath of Allegiance during a ceremony that made them American citizens on Tuesday, February 21, 2017.

On the eve of what would have been George Washington’s 285th birthday, 69 “lawful permanent residents” walked into the Washington Crossing Historical Park visitors center on Tuesday and handed over their green cards.

Just after 2:40 p.m. – following a few tense moments of sitting in an auditorium without the precious cards indicating their status – they raised their right hands, swore an oath and became American citizens.

In the parlance of a heated age when immigration stands as a hot-button issue, these newly minted Americans did it “the right way,” even though their paths to citizenship don’t line up exactly with those under debate and subject to presidential executive orders.

Before a stage with a painting of Washington crossing the Delaware River as the backdrop (not to mention a real-life impersonator looking on), their monumental life moments came after a “Call of Countries” from which they came months – if not years – ago.

They represented 35 countries in all, from Algeria to Vietnam – with China, Mexico, Pakistan, Russia, Serbia, Syria and Ukraine in between.

Their oaths of citizenship were met by a loud round of applause, the first welcome message as citizens and a patriotic video scored with “America the Beautiful.”

“I’m proud to call you all Americans,” said “Gen. George Washington” before leading the new citizens in their first Pledge of Allegiance as such.

“I feel different. Something changed. I feel like I belong in this country now.” – Lynda Bengali, Algerian native and new American citizen

One by one, they walked to the front of the room, received their certificates of naturalization and a commemorative coin from Washington Crossing Historic Park before the ceremony came to an end just after 3 p.m.

There was cookies and water outside the auditorium for those who didn’t have to rush off and get back to work after the mid-afternoon ceremony. Smiles were abundant, as well.

Vendant Tiwari, a 20-year-old from India, had started the citizenship process just six months ago. 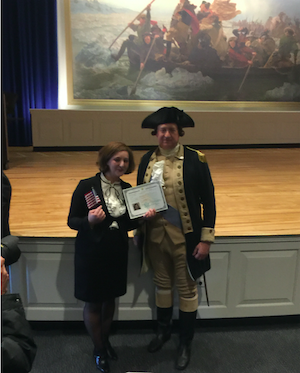 After taking the Oath of Allegiance and receiving her certificate of naturalization on Tuesday, February 21, 2017, Lynda Benali (formerly of Algeria) posed for a picture with Gen. George Washington at Washington Crossing Historic Park.

Akakpo, from Benin, agreed. He’s waited 16 years for the moment.

For Lynda Benali, getting that certificate means she apply more easily for jobs to finally put to use the engineering degree she received in her Algerian homeland.

She came to the United States in August 2010 and quickly learned her degree meant very little to prospective employers in this country.

Her educational route looped her back into a cycle where she needed to learn American English (as opposed to the British variant she mastered at home). Now living in North Wales, Montgomery County, she’s a day care teacher/bus driver.

“I feel different,” she said after the ceremony. “Something changed. I feel like I belong in this country now.”