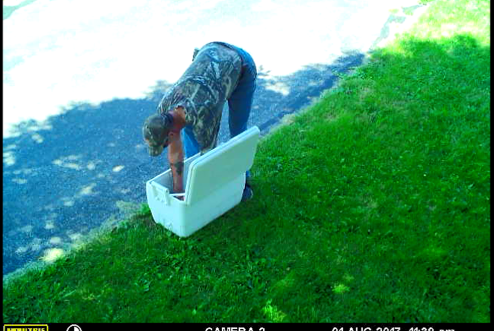 This dude allegedly steals eggs from a family's roadside stand in Pennsylvania.

A dozen eggs will set you back about three bucks, which is what makes one man's alleged petty theft in Berks County extra petty.

State police said Wednesday they're trying to identify the man who was allegedly caught on camera looking through a family's roadside cooler in Hereford Township.

According to police, this guy may be a serial egg thief:

The victim sells eggs from a cooler outside of her residence that her family and children help raise. On 08/01/17 a dozen eggs and approximately $6 in change were stolen from the cooler. Due to the numerous thefts, they have only been leaving out a dozen eggs at a time.

The victims have captured his image from previous dates as well when eggs and cash had been stolen.

He could apparently afford a tattoo on his arm that "looks like a bull's head," police said. Just go buy your own eggs, man.