Analyzing the advantages and disadvantages of the Eagles' 2022 schedule 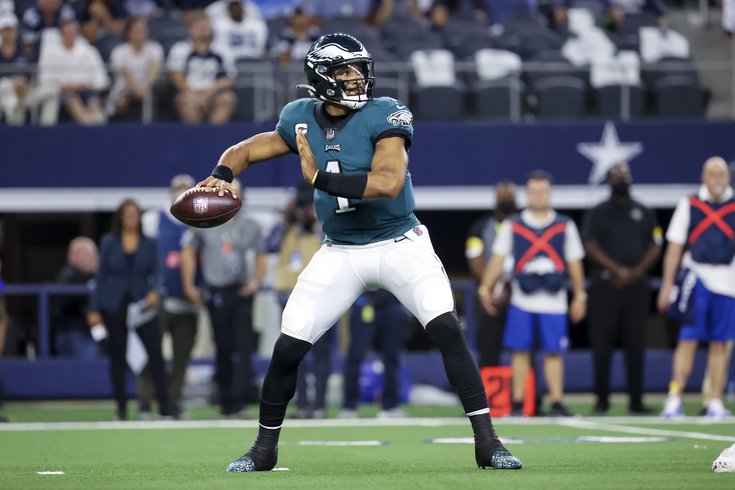 Jalen Hurts and the Eagles will face the Cowboys on short rest in Dallas on Christmas Eve.

The Philadelphia Eagles' 2022 schedule is set, so now we'll take a deeper look at the advantages and disadvantages of this year's slate of games.

In recent years, the Eagles have generally gotten favorable schedules. This year, I believe the disadvantages caught up a bit.

The NFC East teams all play each other twice, as you're aware. They also play the entirety of the NFC North and the AFC South, a pair of pretty bad divisions. As such, the four NFC East teams have the four easiest schedules in the NFL.

The NFC East teams each have three games on their schedules that their divisional rivals don't. The Eagles have a second-place schedule, and as such, they play second-place teams in the NFC West, the NFC South, and the AFC North. Those teams are the Cardinals, Saints, and Steelers. The NFC East teams drew the following floating opponents this year:

There's a decent argument to be made that all three of the Cardinals, Saints, and Steelers could see dropoffs in win totals from 2021 to 2022.

Ideally, you would prefer to get your weaker opponents early in the season, in my opinion. Or perhaps better stated, you would prefer to get your stronger opponents later in the season. Why? Well, because the NFL is a league that depends so much on injury luck, early-season good teams becoming late-season bad teams is a more common occurrence than early-season bad teams becoming late-season good teams. And so, you may as well get the bad teams early and the good teams late, since the good teams might lose a quarterback or something.

A counter-argument to this logic is that the Eagles got their weakest opponents late in the season, and those games became exceedingly easy after some of those teams suffered debilitating injuries. For example, the Eagles beat already-bad teams like the Commanders and Giants, who lost their quarterbacks and had to start guys like Garrett Gilbert and Jake Fromm. Of course, they had to climb out of an early 2-5 hole to make the playoffs because they had their harder opponents upfront.

I still very much believe you'd rather get the bottom-feeders early on.

• Getting two home games to close the season is a nice advantage, should the Eagles make the playoffs.

If they make the playoffs this season, they won't be travel-weary for their first matchup.

• The Eagles play one team coming off of their bye week, which isn't an advantage really, but it's fine. That team is the Bears.

• The Eagles have road games on three straight weekends, a major disadvantage that schedule makers try to avoid. Oh, and they occur late in the season, in Weeks 14, 15, and 16. Oh, and the third game of that three-game stretch occurs on a short week of rest against the Eagles' most dangerous divisional rival, the Cowboys, and on Christmas Eve, no less. It's worth noting that the first game in that three-game stretch is just a bus ride to North Jersey, but the Eagles still got screwed here, in my opinion.

• The Eagles have four road games on short rest.

Their Thursday night game is not only on the road, but it's also a semi-long distance flight. Typically, the NFL tries to keep travel distances short on short-week Thursday games, but they did the Eagles no favors making them fly to Houston. On the bright side, as our Evan Macy noted last week, the Eagles are only leaving the eastern time zone four times and are traveling a total of 13,940 miles in totality — which is the ninth fewest miles traveled for any NFL team. Of course, being on the east coast among a cluster of other NFL teams, the Eagles are usually among the least-traveled teams.