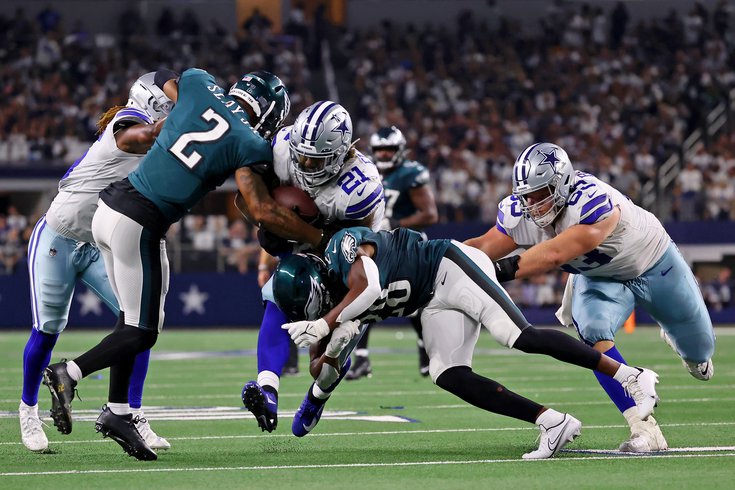 Dallas Cowboys running back Ezekiel Elliott runs with the ball while being tackled by Philadelphia Eagles cornerback Darius Slay and safety Anthony Harris.

While we await NFL schedule leaks and the eventual full slate of games for the Eagles to be released next week, there are already a few huge advantages the team already knows it will have in 2022.

First, even after earning a wild card spot last year and finishing second in the NFC East, Philadelphia sports the third easiest schedule to come next year, based on 2021 records. Not surprisingly, with the Giants and Commanders still mired in rebuilds, the NFC East brings up the rear when it comes to early SOS.

The Eagles non conference opponents are the Packers, Jaguars, Vikings, Steelers, and Titans at home, and the Cardinals, Bears, Lions, Texans, and Colts on the road. Only the Packers and Titans were contenders last year, and the Titans will — of course — be without star wideout A.J. Brown who was traded to the Eagles on draft day.

According to Sharpe Football Analysis, which takes into account expected wins and not past wins, the Eagles have the third easiest slate of games, behind only Washington and Chicago.

But wait, it gets even better for the 2022 Eagles. According to some math done by bookies.com, the Eagles are only leaving the eastern time zone four times and are traveling a total of 13,940 miles in totality — which is the ninth fewest miles traveled for any NFL team. This low number is in part due to the Eagles missing out on the Mexico City game against Arizona, but also helped by some relatively easy non-conference trips to Detroit, Chicago, Indianapolis and Houston. Philly only goes west of the central time zone one time. They may not be the most exciting cities to travel to from Philadelphia, but the Eagles will certainly take any advantage they can get.

The full slate of games, including the order of opponents, the days of the week, and the times of day will be released next Thursday night, with leaks likely to start trickling in during the hours before the 8 p.m. schedule reveal. If we hear any more about the Eagles 2022 schedule we'll be sure to update you.