Are fitness transformations a form of fat shaming?

Last Friday, the Internet went wild over a new “skinny acceptance” initiative called “Project Harpoon,” whose creators Photoshop pictures of plus size models and celebrities like Melissa McCarthy, Rebel Wilson, and Tess Holliday to fit culturally imposed beauty standards. Project Harpoon even sunk so low as to nab Instagram photos from everyday women and digitally hack them to pieces, too.

The group’s accounts have since been removed from Facebook and Instagram for violating community guidelines that prohibit bullying. And yet the movement’s signature hashtag, #thinnerbeauty, persists on social media, where #thinnerbeauty advocates are becoming increasingly vocal about what they deem healthy and attractive. 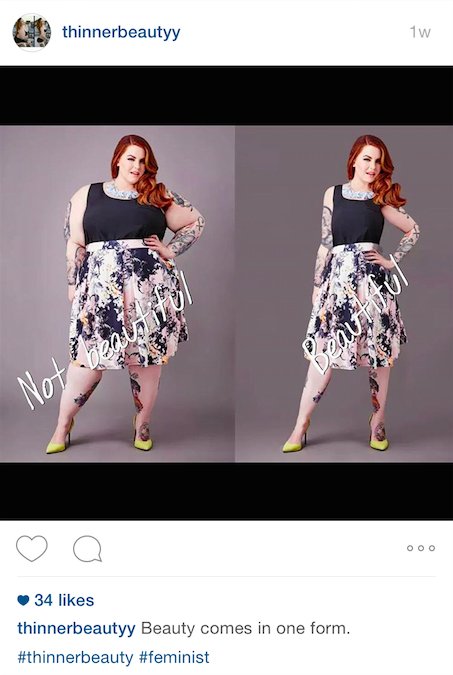 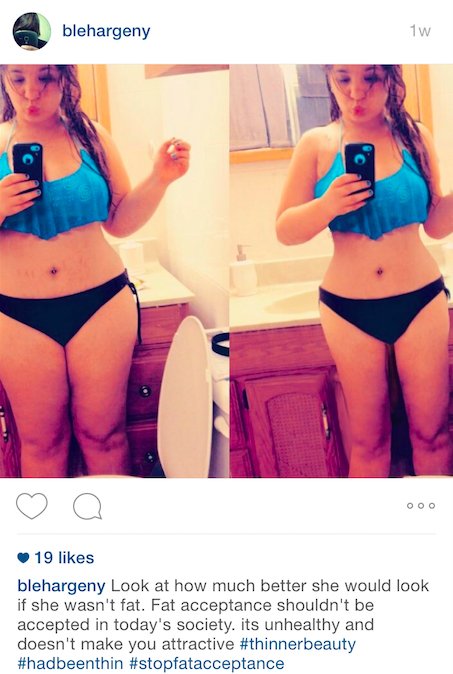 Because inside of every fat girl, there's an attractive woman trying to get out. #thinnerbeauty

The notion that “inside every fat girl, there’s a thin girl dying to escape” isn’t new. Lots of women grew up fantasizing about what it would be like to pare their jiggly bits the way you trim a piece of meat. It’s why the idea of liposuction is so viscerally appealing to those obsessed with spot-reducing “problem areas.” As our lives increasing shift into digital territory, however, brisk Photoshop jobs suffice for invasive plastic surgery. Hardly anyone admits using blemish smoothing, slenderizing “selfie-enhancer” apps, despite their exploding popularity. Yet, when it comes to real life weight loss transformations, people are more than happy to spotlight their former “imperfections.”

The Huffington Post’s Alanna Vagianos called Project Harpoon’s campaign “despicable” and “unacceptable.” I agree. There’s something devastatingly sad about viewing side-by-side before & afters that imply thinner is more beautiful. Our collective horror with Project Harpoon seems to stem from the fact that Photoshopping a woman’s body (especially without her consent) to fit subjective beauty standards is a sick thing to do. It is. And yet, after viewing so many #thinnerbeauty before & afters, I’m reminded of the countless weight loss/fitness side-by-sides I’ve seen men and women post of themselves online. Though these “after” shots are the byproduct of “real life” perseverance at the gym and are (presumably) untouched, their message rings the same as #thinnerbeauty’s doctored “improvements:” your thinner self is your better self.

English reality TV personality Charlotte Crosby, the brain behind “Charlotte Crosby's 3 Minute Belly Blitz” exercise DVD, frequently posts before & after shots of her weight loss transformation for her 3.4M Instagram followers. The captions she writes about her own “before” images are spiteful as Project Harpoon’s plus size vitriol.

“Erghh who is that monster standing next to me!?!? Oh! wait that’s me! so happy with the new improved me,” Crosby captioned a photograph of her trimmer self positively gasping next to a life-size cardboard cutout of her fuller self in a bikini. 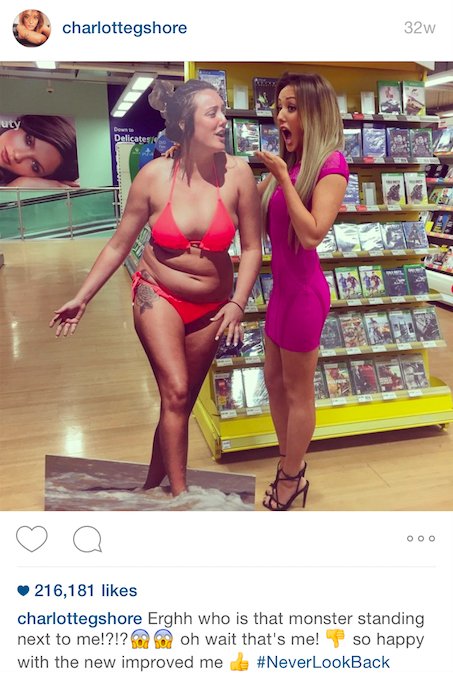 “Why do I feel like #BigCharlotte is trying to eat me on here” she captioned a similar photograph staged to promote her #3MinuteBellyBlitz routine.

In another photo, Crosby displays just how much she hates “Big Charlotte” by ripping the cutout’s head off. 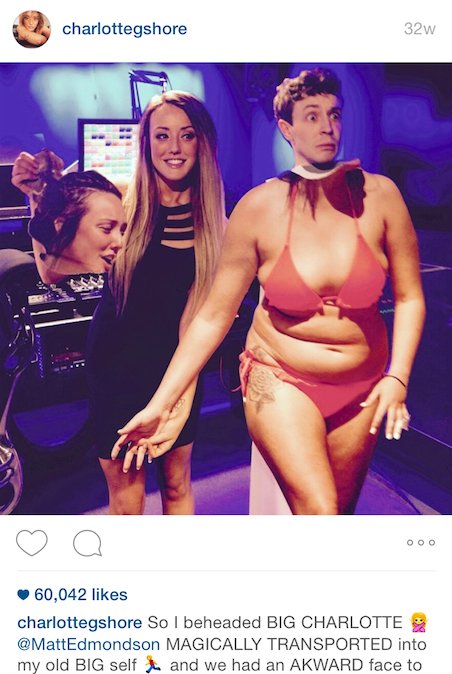 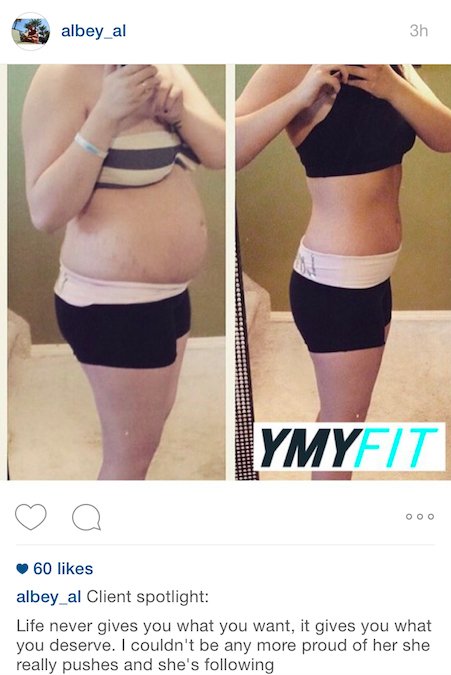 “Left was a few years ago taken at a custard shop & the right was 2 days ago before I took my pup on a walk for #LISS So happy I #FINALLY have a grasp on nutrition & health (though there is plenty more to learn). #Cheers to taking care of your body!” 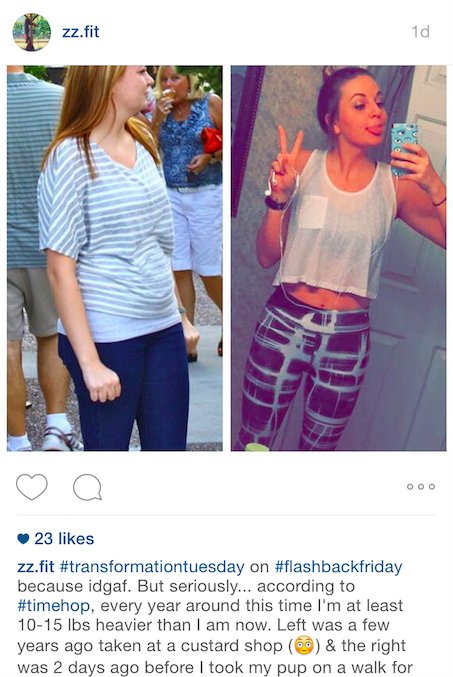 I think it’s completely okay if a person wants to work out to change her body for athletic or aesthetic reasons. Everyone deserves to be comfortable in her own skin, whatever an individual’s preferred body composition may be. Fitness transformations undoubtedly take a lot of hard work and are certainly worth celebrating, too. If you ask me, the more people posting confident gym selfies, the better. But there’s a way to appreciate your new body without reflecting on your former shape with disdain. Without ostracizing millions of others who might possess a figure similar to the one you’ve deemed unworthy.

Just because a woman has become more thin or fit, doesn’t mean she’s become more beautiful or more attractive. It doesn’t mean she objectively works harder or should have more self-worth than her former, fuller self. Plus size people aren’t thin people trapped in fat suits. They’re not caterpillars in cocoons. Their lives shouldn’t be reduced to some sort of latency period spent waiting, and dreaming, and hoping to lose weight. Yet, before and after weight loss juxtapositions insinuate all of the above, whether they’re Photoshopped or not. Whether they’re posted with or without their subjects’ consent.

Whether they’re framed as positive or negative reinforcement, fitness transformations can fat shame all the same.