He made eight stops on his Friday morning mission 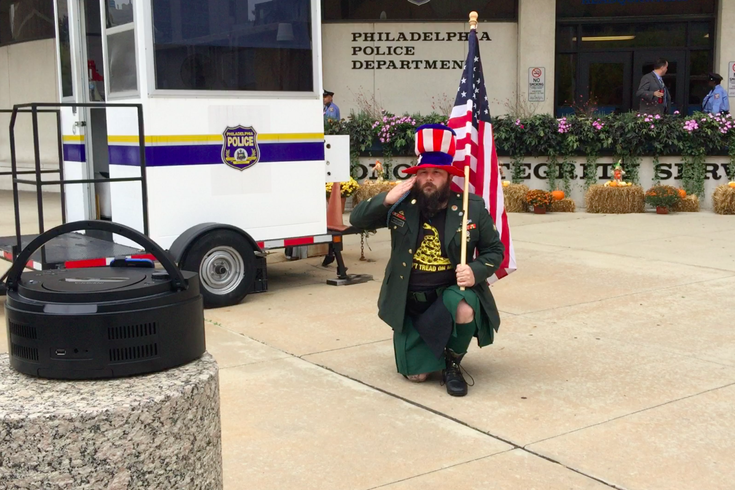 When the sun rose amid a cloudy Friday morning sky, U.S. Army infantry veteran Chris Mueller set out on a trip that would take him to police stations in Upper Moreland, Abington, Cheltenham and Philadelphia.

The 32-year-old Mueller wore his Army jacket, a “Don’t Tread on Me” T-shirt, a kilt and a novelty Uncle Sam-inspired hat. He carried an American flag and battery-operated boom box to each stop.

At each of his eight destinations, he set up his phone to record video for Facebook posts, then took a knee and saluted as the national anthem played through the boom-box speakers. (At Philadelphia's City Hall, where he closed his tour, Mueller played the Jimi Hendrix version.)

It was a one-man roving protest against police brutality, and how the issue has been grossly misrepresented as being non-patriotic when it’s anything but, he said.

“At 3 in the morning one day a couple weeks back, I was trying to think of a way to piss as many people as I can off to draw attention to an important issue,” he said outside the 22nd and 23rd Police District headquarters in North Philadelphia. 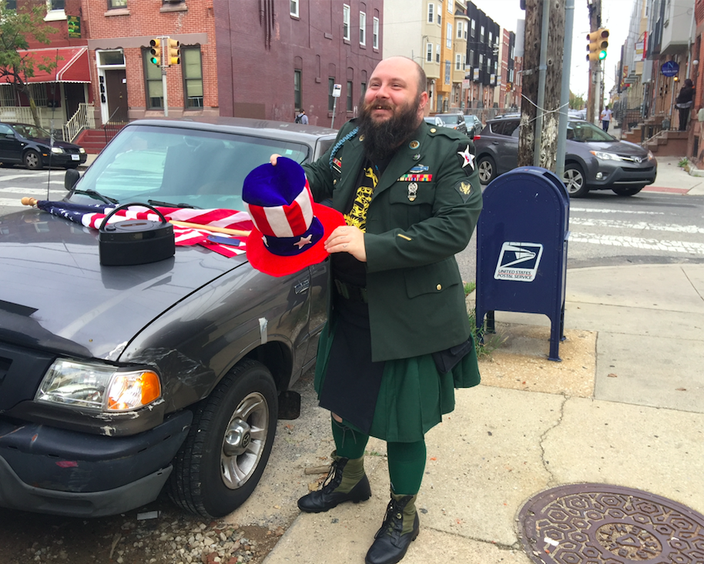 Chris Mueller said he hopes that his Friday protests inspire others to 'take a knee' outside local police stations as part of a 'peaceful protest against police brutality.'

That he’s a military veteran aligning with fellow anthem-kneeling protesters could only bolster that cause as well, he hoped. Those taking a knee aren't protesting the military, the flag or the nation, despite it being presented as such by critics, he noted.

“[Former San Francisco 49ers quarterback] Colin Kaepernick was using the platform he had to bring attention to police brutality and they misrepresented what he was trying to say to further separate and divide us,” Mueller said. “Kaepernick is being 100 percent patriotic by standing up for what he believes in.”

Some NFL players kneeling during the national anthem before games has become a hot button issue.

“I'd like to see people doing this everywhere.” – Chris Mueller

Mueller didn’t face much pushback beyond officers in his suburban stops looking out the windows trying to figure out what he was doing and being told during his protest outside the Roundhouse that he shouldn’t do so right by the entrance.

He said his message was simple: Police departments should engage citizens who say they’re scared to interact with officers in their communities.

He hopes his effort inspires others to do the same.

“I'd like to see people doing this everywhere,” said Mueller, who drove up and down Broad Street in June with fake body bags in the bed of his pickup truck to draw attention to returning veterans’ troubles with medications prescribed to help with their PTSD.

“This is a peaceful protest," he continued. "We're supposed to peacefully protest for things we believe in in America.”