Painter said he added a shadow to represent the Lewinsky scandal 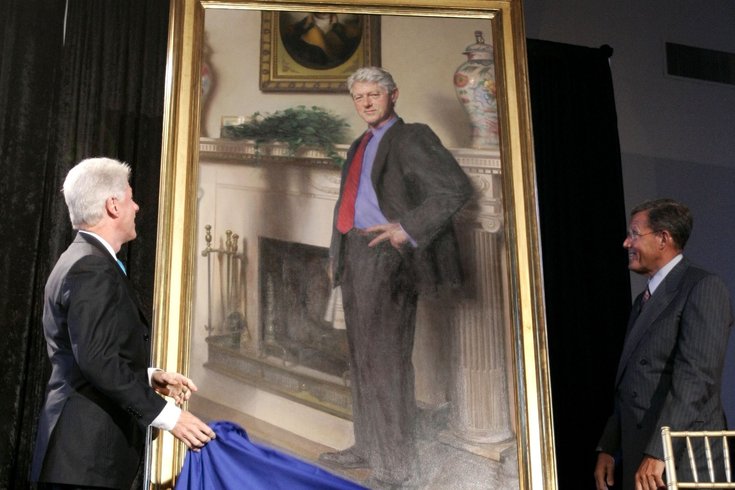 Former President Bill Clinton, left, looking up at his portrait after Lawrence M. Small, secretary of the Smithsonian Institution, right, helped him remove the drape at the Smithsonian Castle Building in Washington, D.C.

In the National Portrait Gallery hangs a painting of the 42nd president. Looming a little to the left of former President Bill Clinton is a shadow — and the portrait's creator said it's meant to represent Monica Lewinsky.
Bucks County artist Nelson Shanks said he couldn't ignore the Lewinsky scandal that ultimately lead to the impeachment of Clinton, philly.com reported, calling him "the most famous liar of all time."
"I put a shadow coming into the painting and it does two things. It actually literally represents a shadow from a blue dress that I had on a mannequin, that I had there while I was painting it, but not when he was there. It is also a bit of a metaphor in that it represents a shadow on the office he held, or on him."
Shanks claims the Clintons know about the shadow's meaning and hate the painting and want it removed from the National Portrait Gallery — but a spokesperson denied the claim.
Shanks said it was the most difficult portrait he's ever painted.
Click here for the full story.