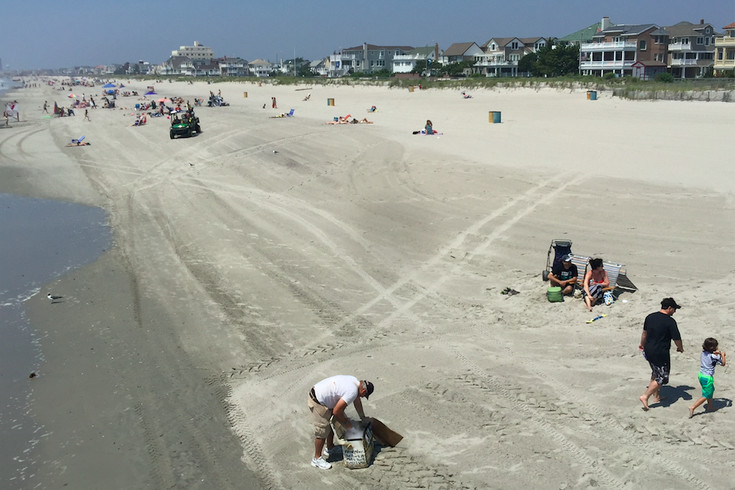 The beach, as seen from the Ventnor Fishing Pier on Friday, June 30, 2017, before the Fourth of July long-weekend onslaught descends.

New Jersey officials closed the ocean to swimmers on nearly a dozen beaches in Atlantic City and Ventnor on Wednesday, along with several other back bay and river beaches in Ocean County.

Elevated bacteria levels caused the state Department of Environmental Protection to close three beaches and issue dozens of water quality advisories for others on Tuesday.

While more than a dozen advisories were lifted Wednesday, including in Ocean City and North Wildwood, officials closed beaches between Fredericksburg and Jackson avenues to bathers in Ventnor. In Atlantic City, bathers were barred from the water at Georgia and Missouri avenues near Boardwalk Hall, as well as North Carolina and Pennsylvania avenues near Steel Pier. Four beaches in the southern part of the city were also closed to swimmers.


Some other beaches in Atlantic City and Margate are also temporarily closed for beach replenishment, Hajna said.

The closures and advisories follow several rounds of heavy rain this week that caused pollution runoff into drainage that leads to ocean and bay outfalls, DEP spokesman Larry Hajna said.

"This is a little unusual where we've gotten so much heavy rain," Hajna said. "It's been a wet summer, and the testing we're doing is picking up bacteria that's carried typically from animal waste such as gulls and geese."

Overall, closures grew from three on Tuesday to nine on Wednesday, and then to 15 Wednesday afternoon, including 11 in Ventnor and Atlantic City combined.

The DEP issues an advisory when water samples – usually collected by county or local officials and sent to a lab for testing – exceed standard levels for enterococci, a bacteria found in human and animal waste.

But the department closes beaches if two consecutive samples collected at the same beach exceed 104 colonies of Enterococci per 100 millimeters, Hajna said.

The DEP keeps a running tab of testing results and any advisories or closings at www.njbeaches.org.

The following beaches are under advisory: