By Bryan Bierman
PhillyVoice Contributor
Bad For You Beef Jerky 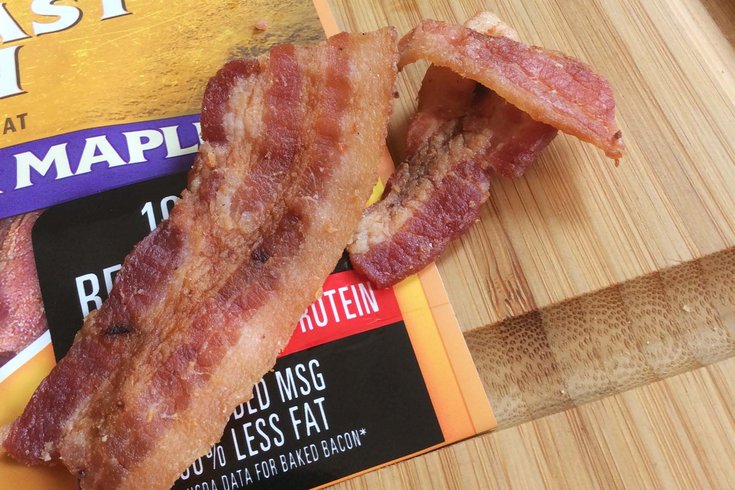 Whether it’s as an on-the-go treat, a quick shot of protein or one of the essential food groups for doomsday preppers, jerky’s rising popularity is one of the snack world’s biggest success stories of the past 10 years.

Jerky is as pure meat as you can get, getting rid of all that lame non-meat stuff like water that always holds meat back from its true meat potential. Jerky is for those who need meat now and don’t care if they have to chew it like gum for 16 minutes in order to swallow it; for those who are hungry for a months-old piece of dried cow that will also cut your gums up a little.

Not only can jerky be prepared in an almost endless amount of ways, the best part is that you can make it from pretty much any animal. Sure, there’s beef jerky and turkey jerky, but the real fun is the more exotic jerky, the Super Black Market Jerky. If you know the right people, you can get jerky anything.

You know how the world is run by lizard people who are alien shapeshifters inhabiting our celebrities and world leaders?

They’re called Reptilians and their meat is delicious.

Some people may question why they would make jerky out of breakfast meats. On the contrary, this solves the problem for people like me who want to eat jerky in the morning but don’t want to be judged publicly for doing so.
I opened the Brown Sugar & Maple Breakfast Bacon first. There’s actually some controversy about whether or not bacon jerky is just cold, leaner-cut bacon but I will leave that to the Bacon Council to sort out. It certainly smells like bacon, with the overwhelming aroma of brown sugar and maple syrup. It tastes like bacon too, albeit a little chewier and less greasy. The sugar coating was often only hinted at, so sweet bacon lovers beware. 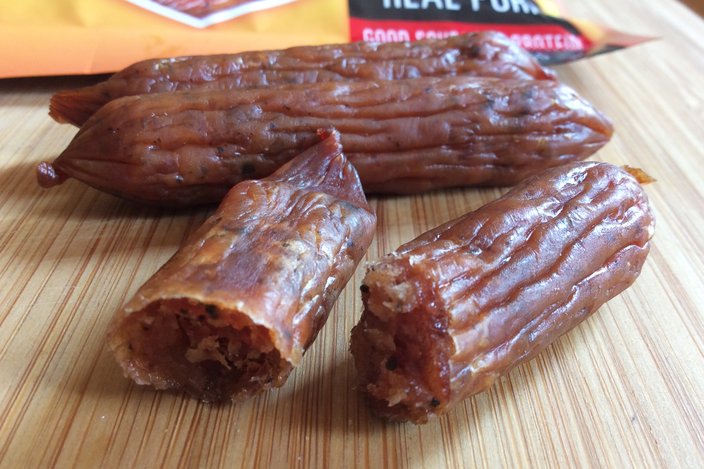 The Original Breakfast Sausage comes in little sausage logs, which, again, are not too greasy to the touch. With the Breakfast Bacon, I had a rough idea of what I was getting into. However, I would be lying if I said I wasn’t nervous biting on that first sausage.

To my surprise, it wasn’t bad. It tasted like a Jimmy Dean sausage with the added jerky smokiness flavoring. The applesauce added a subtle sweetness that I wasn’t expecting. It’s probably on par with a sausage you would get on a fast food breakfast sandwich.

What originally caught my eye about the A.M. jerky was on the back of the packaging. It says that both can be heated up in the microwave for 10 seconds to eat it warm. This was especially intriguing/disgusting. 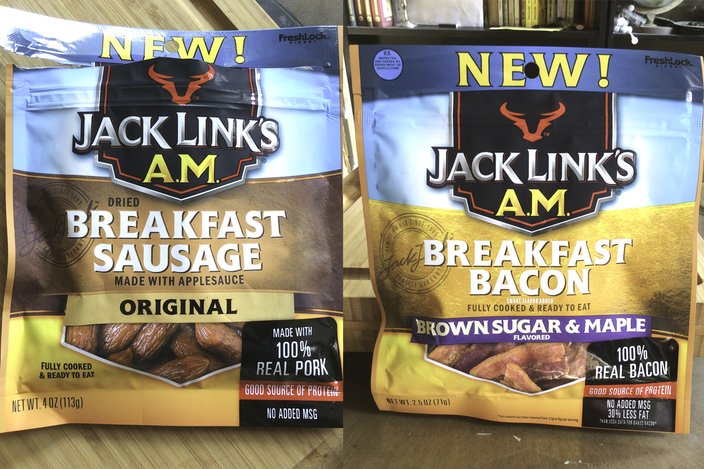 In what shouldn’t have been a shock, the Breakfast Bacon was better heated up. The brown sugar was more evenly melted and the texture of the bacon changed a bit as well. This was more or less the precooked bacon you can microwave at home. The Breakfast Sausage was not better heated up. While it wasn’t a significant detriment, the lukewarm mushiness of the applesauce and meat was not very appealing texture or taste wise.

Verdict: I did not have high hopes for this, but it exceeded my low expectations. If breakfast meat jerky interests you, then follow your heart. Fear the wrath of judgment no longer.