The company's founder Dave Portnoy visited Philly this week in honor of the bar opening at 1213 Sansom St. 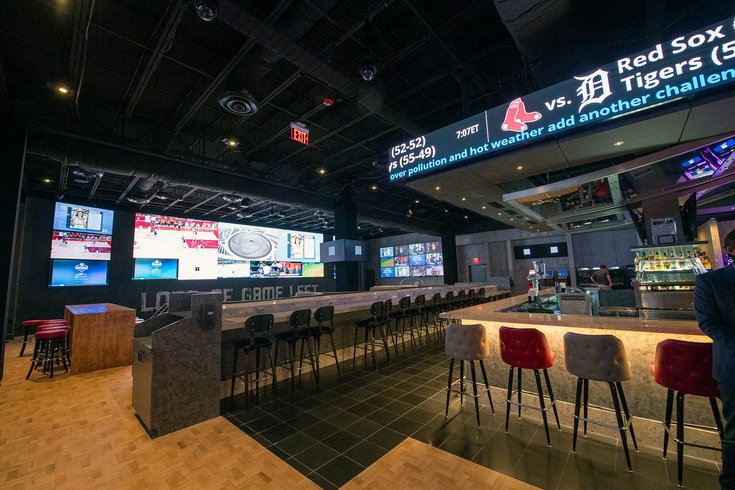 Barstool Sports' new bar at 1213 Sansom St., which opened on Friday, is designed to be a good place to watch a game and gamble virtually.

The sports bar at 1213 Sansom St. is designed to be a good place to watch a game and gamble virtually.

Although the pub won't be a betting parlor, something that would require a special license, the venue will aim to provide food, drinks and an atmosphere conducive to online sports betting.

A key goal for the bar is promoting Barstool's popular online sports betting app, Barstool Sportsbook, which is currently available in 12 states.

The pub was created through Barstool's relationship with Wyomissing's Penn National Gaming, which owns roughly a third of the media company.

Pennsylvania legalized gambling in November 2018 and is one of 43 states that has launched a legal sports betting marketplace. This followed a Supreme Court case New Jersey won in May 2018 which set a precedent for states across the nation to legalize sports betting.

Barstool's Philly location, which will be open from 5 p.m. to 2 a.m. Monday through Friday and from 11 a.m. to 2 a.m. on the weekends, is Barstool's second branded pub. The first opened in Chicago in January and the company plans to open more around the country.

The new bar is replacing the Brick Wall Tavern, which closed during the pandemic.

Dave Portnoy, Barstool's controversial founder and figurehead, was in Philly this week for the opening.

The sports and financial commentator who's also known for his daily pizza reviews stopped at Pizzeria Vetri at 1939 Callowhill St. on Thursday.

He gave the spot known for its Neapolitan-style pies a 6.8, as he's not a big fan of that particular kind of pizza. Users on Barstool's One Bite pizza review app like it more, and gave it a 7.4 on average.


Portnoy has done several other pizza reviews in and around the city and gave a particularly high score, a 9.1, to Angelo's Pizzeria at 736 S 9th St.

He has been accused of sexual misconduct by several women, but has vehemently denied those allegations.