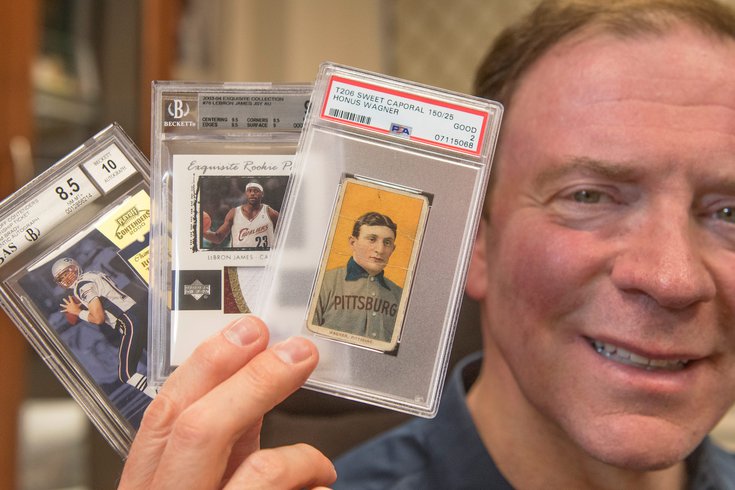 Ken Goldin, the executive chairman of one of the most popular sports memorabilia auction sites on the internet, will the be the subject of a new Netflix show tenatively called 'the Goldin Touch.'

A Runnemede man who's made a fortune buying and selling trading cards and other valuable collectibles is the subject of a new Netflix series.

Tentatively titled "The Goldin Touch," the show follows Ken Goldin and the characters he comes across through his company Goldin.

Although the trading card expert told the Philadelphia Business Journal he has to keep most of the details about the show secret, he would say he expects it to be good for his bottom line.

"Netflix is really going to be a tremendous outreach for the company," he said. "Over 700 million people can watch it. The show is going to be translated into 42 languages."

The program was created by Brent Montgomery, who produced the History Channel's popular show "Pawn Stars." and it is produced by Peyton Manning's Omaha Productions.

Goldin doesn't mind being in front of the camera. He hosts a weekly livestream on his Instagram account where he opens packs of trading cards to entertain his viewers. He started collecting baseball cards at age 12 in 1978 and founded his company in 2012. It has since become one of the most popular memorabilia marketplaces on the internet.

The trading card business has experienced a renaissance in recent years that picked up even more amid the COVID-19 pandemic. Some collectors have begun treating the pastime as a true investment strategy. Many buy the cards of young, promising players in the hopes they'll meet expectations and drive the value of the cards up over the course of their careers.

Goldin's site has hosted seven-figure transactions, like the $3.9 million 2020 sale of Los Angeles Angels center fielder and Vineland native Mike Trout's rookie card. That price tag made it one of the most expensive baseball cards in history.

Goldin isn't just about sports memorabilia. Last month, the company auctioned off the most expensive Pokemon card of all time for $900,000. The Pikachu Illustrator Holo promo card printed in 1998 is one of the rarest in the nearly three decade old Nintendo game.

After receiving $40 million in funding from a group of investors last year, including Dallas Mavericks owner Mark Cuban and actor Mark Wahlberg, Goldin sold his business to Collectors Holdings – another memorabilia company – for an undisclosed price.

But he remains the executive chairman and is still operating his business independently under the larger company's umbrella.